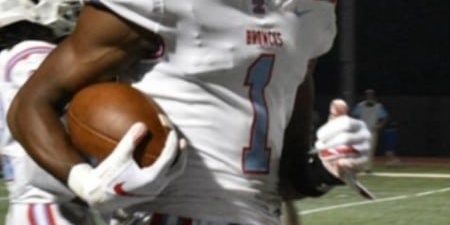 It is hard to imagine one player take over an entire state championship game, especially as a sophomore, but that is what Zachary High School wide receiver Chris Hilton did back in the 2018 Class 5A state championship game. Against the mighty West Monroe Rebels, all Hilton did was score two crucial touchdowns in the Super Dome. Not only was the 6-1, 175 pound receiver an impact player for the Broncos, but he just so happened to make a play that will live on in Zachary High School football lore in order to give the Broncos their second straight Class 5A state championship and third in four years.

Trailing 24-20 with under two minutes left to play in the game, the Broncos had a third and ten and had to drive 80 yards to win the game. What happened next surprised everybody.

“The previous two plays, we did not get anywhere, and it was third down,” Hilton said. “They called a screen pass to my side, and I was just going to try to get as much as I can on that play. I was thinking hopefully that it was going to be enough for a first down. When I caught the pass, I just took off.”

Zachary senior quarterback and Memphis signee Keilon Brown threw a short screen pass to Hilton, and Hilton broke free 80 yards for a touchdown to help take the lead and seal the game for the Broncos. As one can imagine, making a game winning play in a championship game can be a dream come true.

“It was a special play because it was my first year playing varsity,” Hilton said. “You don’t usually expect a young guy like I was at the time to make a play like that.”

Even though the 80 yard game winning touchdown catch would live on forever in Hilton’s memory, he has shown plenty of more highlight reeling plays not only after the play, but before the play as well. Unsurprisingly, shortly after, Hilton received a lot of college attention receiving offers from big college football programs including the likes of LSU, Alabama, Florida, Georgia, Notre Dame, and Texas A&M. There is not much that beats making a game winning play, but having some of the best college football programs showing you attention at such a young age has to be even more of a dream to a young sophomore.

With all of the fame and notoriety the talented Zachary wide receiver prospect has been getting, it would be easy to brag or boast, but Hilton has truly taken a humble approach thanks to the advice he has been given.

“My parents, Coach David Brewerton, and my wide receivers coach Dru Nettles have given me plenty of advice on how to handle the recruiting process,” Hilton said.

Hilton not only followed his parents’ advice, but he has also followed in his family’s footsteps as his father Chris Hilton Sr. and mother Cindy Hilton were both standout sprinters at Southern University. Hilton inherited his incredible leaping ability from his parents, and even high jumps for the Zachary track team. If that is not enough, he is one of the team’s best dunkers on Zachary’s basketball team.

“I probably got my speed from both my parents, and probably my jumping ability from my Mom,” Hilton said.

Not only is Hilton a talented three sport athlete, but he also has another hidden talent that not a lot of people know about.

“I can juggle a little bit,” Hilton said jokingly. “I can probably juggle three at a time.”

Even Hilton’s juggling hobby has helped him as a wide receiver with his hand eye coordination skills. Hilton has used those traits passed down to him in order to become one of the best wide receivers in the entire country. Still, he believes that he can accomplish a lot more heading into his senior season.

“One thing that I would like to improve on is my route running,” Hilton said. “I would also like to become Gatorade Player of the Year and a state champion once again.”

Coming off an injury plagued season as well as a semifinal finish in his junior season, Hilton wants to end his high school season in the same fashion as he entered the national spotlight.