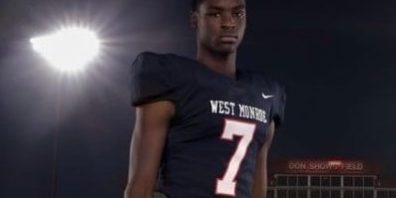 Three-star prospect Rayshawn Pleasant, a six foot tall ATH from perennial state championship contenders West Monroe, is a driven team-first player that looks to electrify 5A with his speed and quickness. Boasting a blistering 4.45/40 yard dash time, this Louisiana Tech Bulldogs commit blows away defenses with his speed as a running back and wide receiver, modeling his offensive game after Le’Veon Bell. Pleasant also uses a unique combination of speed and strength on the defensive side of the football as a cornerback, where he said he models his game after Carolina Panthers rookie corner Jaycee Horn. The West Monroe senior hopes to improve the mental aspect of his game, specifically in the film room.

“I want to get to the point where I can study film and know what the other team is doing on both sides of the ball,” Pleasant said.

Rayshawn looks to help lead West Monroe and assist in ending the team’s ten year drought without a state title with the school’s last championship being a 20-13 effort against Carencro in 2011.

Pleasant had this to say about the 2021-2022 Rebels’ squad, “I think we have a good chance of winning it all. We all know what type of team we are capable of becoming and we try our hardest everyday to become that team. We got [sic] one goal and it’s that, ending the 10 year drought of a state championship.”

Speaking to his personal goals for the season, Pleasant highlighted his team-first attitude, saying he would, “Just do whatever it takes for my team to win a title.” West Monroe’s quest to gain a state championship begins Friday against Sam Houston High School in Lake Charles.

Off the field, Rayshawn plays multiple sports. Alongside football, Pleasant also runs track and plays basketball for West Monroe although he plans to settle on football when he arrives at Ruston and enters Skip Holtz’s program at Louisiana Tech. When asked why he chose to stay close to home and commit to Tech, Pleasant spoke about the love shown to him by Coach Holtz and the ability for him to play football in his own backyard in front of his family. Rayshawn plans to major in business management and eventually get into the real estate industry post-football.

An interesting fact about him is that he was back to full football drills only five months after an ACL surgery. Rayshawn’s dedication and hard work will make him a difference maker for West Monroe this season, and his willingness to work through adversity is apparent. Pleasant is absolutely a must-watch player for the Rebels and as a future Louisiana Tech Bulldog.