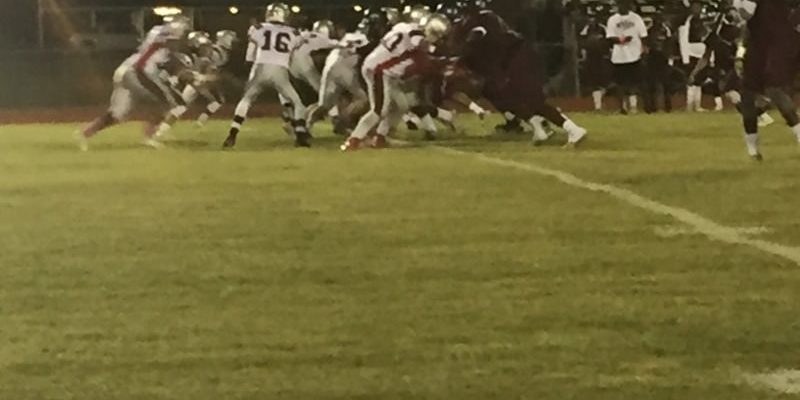 Unlike the last game that I went to when both Dunham and Madison Prep were playing for a district championship, the game I went to this week featured two teams in the Abbeville Wildcats and the White Castle Bulldogs that were desperate for a win. Coming into the game, the Wildcats were 1-7 while the Bulldogs were 2-6 with one of those wins coming in a forfeit. Both teams had a combined record of 3-13 but something had to give tonight and one team was going to improve their record, win the game, and move higher for a chance  to get higher in the playoff seeding. The game could not start any better for the Bulldogs as QB Jeremie Richard threw a long touchdown pass to a wide open Marlon Lewis and on the following play, the Bulldogs went for the two point conversion which would be a successful try. The score was 8-0 Bulldogs, but the Wildcats went down the field themselves and scored a touchdown on a Tavian Menard touchdown run. It is now a one point game at 8-7 on the first two opening drives for both teams and that would be the score at the end of the 1st quarter.

The Abbeville defense had trouble stopping the White Castle offense in the first half but settled in the second half and had their way with the Bulldogs. (Photo taken by Jace LeJeune)

In the second quarter, Abbeville Senior QB Demarcus Collins started to get into rhythm throwing and running the football. On a 10 play drive, Collins threw to the big tight end Allen Arclies, who made our 2nd team All-Louisiana team as a tight end, and carried two Bulldog defenders for a 15 yard touchdown. The Wildcats take their first lead of the football game at 13-8. The Bulldogs will not go away quietly as Richard throws to Lewis again for another touchdown to take the lead 14-13. It seemed that the game was going to get back and forth but that was as close as the game was really going to get. On the very next drive, the Wildcats drove down the field and once again, Collins found his favorite target Arclies as he beat the White Castle defensive back in man to man coverage and caught the easy 25 yard touchdown. The Wildcats regained the lead at 19-14. The question was who was going to take control of the football game as the game started to be going back and forth with both offenses but the score before halftime really propelled the Wildcats and gave them momentum for the second half.

The opening drive of the third quarter was an important possession for the Abbeville Wildcats as they got the ball in the second half with a five point lead. The Bulldog defense stuffed the Wildcats on the first three plays but on fourth down, the Wildcats decided to go for it. What resulted was a 55 yard touchdown run up the middle by Jalan Montgomery to extend their lead to 27-14. White Castle could not get anything going on offense in the second half as the team turned the ball over three times and turned the ball over on downs a couple of times as well. This allowed the Wildcats to wear down the Bulldogs defense and get control of the game. White Castle had a chance to come back as they were down by two touchdowns in the fourth quarter but Richard’s pass was intercepted by Abbeville cornerback Dominic Nunez to make it a three score game and making it almost impossible for the White Castle Bulldogs to get back in the game. Although the Bulldogs gave a great effort to try and make it a game, the Wildcats had too much firepower and held on to win 53-28.

It was a quiet night for the White Castle home crowd but not for the Abbeville fans who made the long trip to see their team win. (Photo taken by Jace LeJeune)

The leading stat leaders in the game for Abbeville was QB Demarcus Collins who threw for two touchdowns was just as impressive using his feet rushing for over 150 yards in the game. The Wildcats had a tough time stopping not only Collins but also running backs Braeden Williams and Jalan Montgomery who ran for a combined 202 yards and had over three touchdowns. Arclies lead all Abbeville receivers with three catches for 45 yards and two touchdowns. For the White Castle Bulldogs, the combination of QB Jeremie Richard and RB Marlon Lewis was working through the air as they connected on three touchdowns. The Abbeville Wildcats improved their record to 2-7 while the White Castle Bulldogs take a step back and are now 2-7. It is amazing how fast this season is finishing. Believe it or not next week is the last week of the regular season of high school football before heading to postseason play. Next week, the Abbeville Wildcats (2-7) try to continue their winning ways against the Westgate Tigers (3-6) while the White Castle Bulldogs (2-7) try to get momentum before the playoffs with a win against the St. John Eagles (0-9). We will have another game recap next week when we close the regular season. Make sure to keep going to our website for stories on players, coaches, and legends as well as recaps of games, and information on our T.V. show!