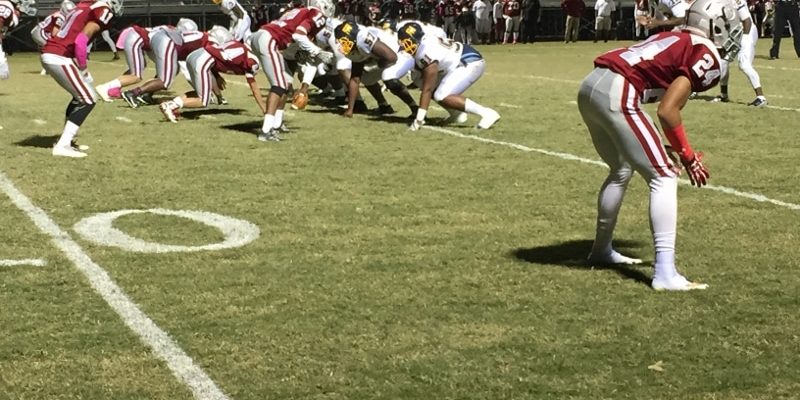 The game that I went to this week was a really good one and a big matchup indeed between the Dunham Tigers and the Madison Prep Chargers. Heading into this game, both teams were undefeated and highly ranked in their classification. Not only that this was a game that can determine the playoff brackets but could ultimately determine the district championship with both teams playing in the 7-2A district. These teams were very similar on paper. Both Madison Prep and Dunham have really good talent all over their roster. Madison Prep has a big offensive line that averages over 300 lbs., a duel threat quarterback, great skill players, and a talented front seven. Dunham has a great one-two punch in the backfield with quarterback Mike Williams, who is over 240 lbs., and runningback Tony Huey, who has 21 rushing touchdowns coming into this game. When I was assigned to cover this game, I thought it would be one of those games that can come down to whoever has the ball last. In the first seven games this year, the Tigers averaged 51 points per game including 78 points in their last win against Capitol. The Chargers average 43 points per game with their skilled playmakers in QB Edwin Kleinpeter, RB Tyrese Walker, WR Brian Savoie and WR Lyndon Rash. The matchup that I was most intrigued about heading to this game was Mike Williams, Tony Huey and the offense vs. the Charger defense of Bryan Jones and company that has a lot of D-I talent on it. Coming into the stadium, I knew the game was going to be a treat and that both teams were going to combine for over 100 points. The game was definitely a treat but not exactly in the way, I thought it was going to be.

There is nothing like Friday night football in Louisiana. (Property of LAFM)

The first play of the game was a preview of what type of game it was going to be. Dunham reliable playmaker Tony Huey fumbles on the opening kickoff which gave the Chargers great field position. After a couple of plays, Madison Prep Kicker Keyonne Hawkins kicks a field goal giving the Chargers a 3-0 lead in the beginning of the quarter. Surprisingly, nothing really happened for the rest of the quarter as both teams were struggling to get in an offensive rhythm. The score remained that way until there was two minutes left to play in the half. Dunham quarterback Mike Williams scrambled to his left and threw a long touchdown to a wide open Harris McKay. The score is now 7-3 but it sure seemed like Madison Prep was slugging their way into the first half. The team had a lot of opportunities to take control of the game in the first half but dropped passes and penalties prevented the team from establishing their rhythm and taking the lead. Besides the long touchdown pass, thrown by Willliams, the Charger defense did a great job of slowing down the explosive Tiger offense in the first half. The Tigers had another chance to extend their lead after a blocked punt by (you guessed it) Tony Huey but sophomore Kicker Benton Davis‘s kick was blocked and that ended the half. Your halftime score was 7-3 Dunham.

In the second half, it was much more of the game that we expected. In the whole first half, ten points were scored between both teams. In the first two minutes of the third quarter, both teams scored touchdowns on their opening possession. The Chargers scored to take the lead on a Brian Savoie touchdown to make it 10-7 Madison Prep. The Tigers strike back on their first drive with a long touchdown run by Huey to make it 14-10 Dunham. It was the longest run of the game for the Tigers and besides the run by Huey, it was trouble trying to find running room against that strong Charger defensive front. Both defenses start to settle in again but the offense still hit some big plays. The second half was a much better half for both teams but there were still some penalties. The Chargers decided to go for it on fourth down and got the touchdown but the play was nullified on an offensive pass interference penalty. The Chargers kicked a field goal and the team trailed the Tigers 14-13. The game enters the fourth quarter and like expected, it is a close game between the undefeated programs. The fourth quarter was when the Chargers moved the ball the most. They scored on a really nice offensive drive that took a couple of minutes off the clock and more importantly gave them the lead when Walker ran the ball into the endzone for a twelve yard touchdown run. Madison Prep Head Coach Michael Roach decided to kick the extra point and the Chargers regained the lead at 20-14. You would think that the Tigers would respond but the Chargers defense thickened and gave the ball back to their offense. The big Charger offensive line pushed their way down the field burning more clock. With under three minutes remaining, everybody would think that the Chargers would run the clock with the lead and the ball. Well, the Chargers did the unexpected and decided to go play action. Kleinpeter’s pass was complete to Rash for a big gain that went all the way down to the one yard line. Two plays late, Walker dives in for his second touchdown of the game and gets the biggest lead for any team in the game at 27-14. The only bad news for the Chargers at that point was that their star receiver Rash ,who got the team in position to extend their lead, was ejected from the game when he had his second unsportsmanlike penalty. With under a minute left to play, the Dunham offense had to score twice to win the game. The Tigers are more than capable of doing that but the time was not on their side. The Tigers were moving down the field with Williams throwing the ball and it came down to fourth down and seven inside the Charger’s 31 yardline. On fourth down, Williams threw it into the endzone to junior wide receiver EJ Hitchens for the touchdown to make it 27-21 Madison Prep. The good news for the Tigers is that the game is not over just yet but the bad news was that there was only 54 seconds left to go in the game. It all came down to the onside kick attempt by Davis. It was a good kick by Davis and at first, it looked like the Tigers recovered the fumble, but somehow the Chargers came up with the ball. The Chargers ran the ball and the clock and held on to win the game 27-21.

The high scoring offensive attack of the Madison Prep Chargers were really effective in the fourth quarter closing the game out for the Chargers. (Property of LAFM)

The game started off sloppy with the penalties, dropped passes, and missed opportunities but the Chargers figured out a way to hang on and win the football game against a really good team in the Dunham Tigers. That is what good teams do. They find a way to win the game even though the team did not have their best performance. We will see if this win will give the Chargers a spark for the rest of the regular season. For the Dunham Tigers, it was a tough loss but they are in great position with a 7-1 record and still a shot to win the district championship. The offense wasn’t as explosive as usual but the team managed to hang in the game with one of the most talented teams in the Baton Rouge area. Even though the game wasn’t exactly high scoring, it still resulted in a pretty good football game that was filled with big plays and big drama. Next week, Head Coach Neil Weiner and the 7-1 Dunham Tigers have another tough test on the road against the Christian Life Crusaders. Head Coach Michael Roach and the undefeated Chargers have a tough task against the 6-2 Episcopal Knights.