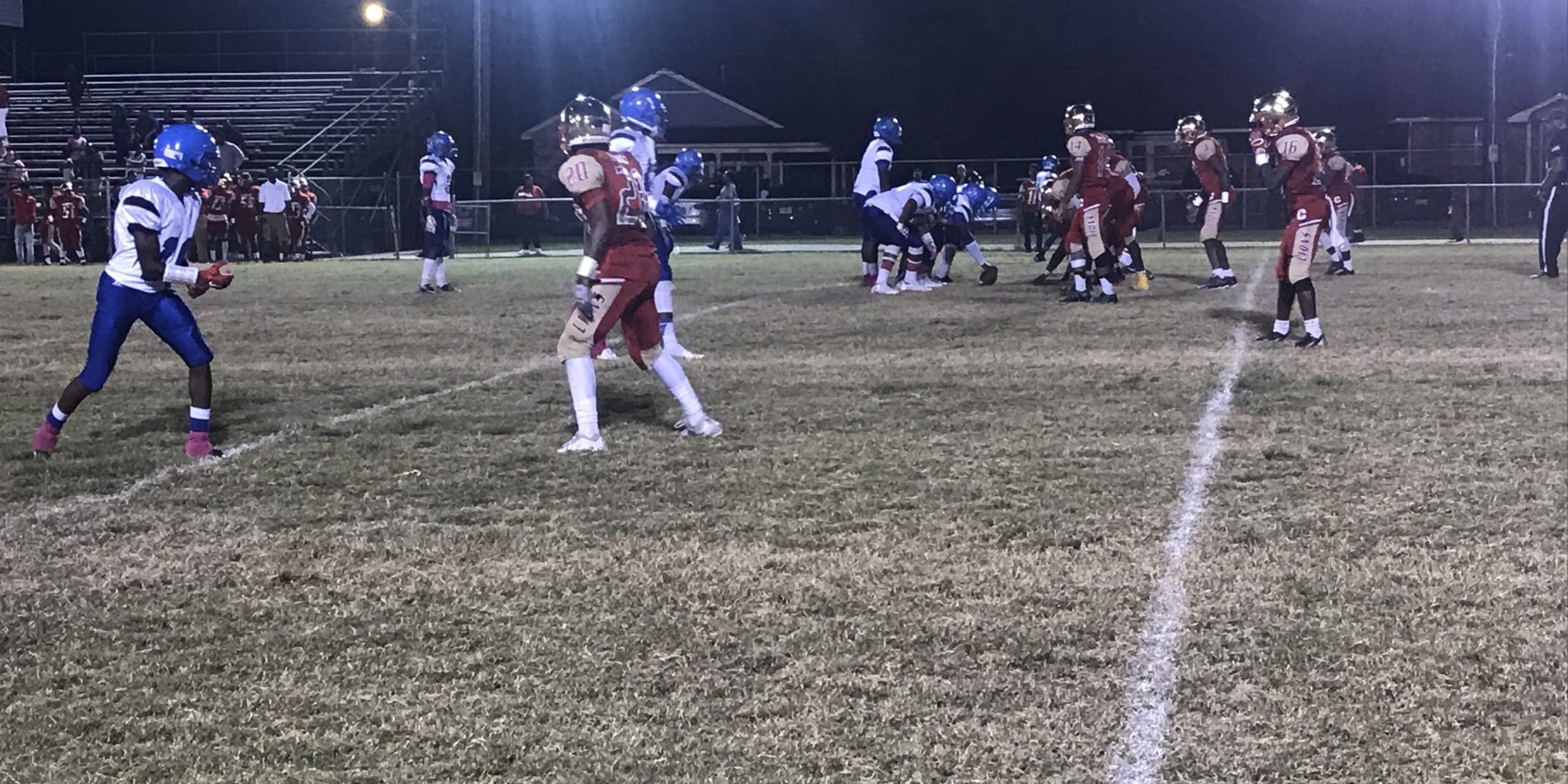 In week six of the 2017 high school football season, the Northeast Vikings played an away game against Friendship Capitol High School at Redemptorist field. It was a great start to the season for Coach David Masterson and the Vikings as the team had a 3-0 start before losing back to back games against Episcopal and Port Allen. In the last two games, it has not been the offense’s fault for the losses as the Vikings combined to score 60 points, but the defense also allowed almost 100 points in that span as well including 65 points in their 65-46 loss against Episcopal. For the Friendship Capitol Lions under first year head coach Jacob Davis, it has been a rough start to the season as the team is 0-5 and is also coming off a 51-14 loss to Episcopal. As both teams are heading into losing slumps this week, it was a chance for the Vikings to fix their defensive woes and for the Lions, it was a time to get some rhythm going to try and to grab that first win of the season.

Even though the Vikings were missing star junior wide receiver Johnny Selders, the Vikings’offense was very effective early in the game against Capitol jumping out to a 14-0 lead after scoring on their first two drives. The first drive resulted in a touchdown pass from Ryshaun Steel to the other star junior receiver Jascent Scott. On the second drive, the Vikings capped off a five play drive, but this time, it was the tough running of Curtis Keaton that got the Vikings in the endzone to make it 14-0. On the next drive, the Vikings committed five penalties on defense showing the problems that they had the previous two games. However, the Vikings defense did their job in the endzone and held the Lions offense out of the end zone. Instead of trying to get points on the field with a field goal, Coach Davis decided to go for it on fourth down, but the Vikings defense got the stop. 14-0 would be the score at the end of the first quarter. In the second quarter, things were a little quiet until the Vikings defense registered a turnover. The turnover put the Vikings in really good field position and that allowed fullback Curtis Keaton to continue his strong game with a 20 yard touchdown. Following the touchdown run, the Vikings went for the two point conversion and converted to make it 22-0 where it stood for the entire first half.

Even though the Vikings were up 22-0, the Lions were still much alive in the game, but the opening kickoff was returned by Northeast explosive playmaker Tyriq Kelly for a 70 yard touchdown to make it 28-0. Once again, the Vikings converted on the two point conversion to put the team ahead 30-0. After the Northeast touchdown, the Capitol offense responded with a long drive, but once again, the drive ended with a turnover on downs. At that point, the Vikings were in full control of this game even though Capitol did make a run at the end scoring a touchdown in the third quarter. However, it was no question that Northeast dominated the game and that was indicated in the scoreboard as the Vikings went on to win 46-6.

For the Vikings, it showed that their offense is going to give the team a chance in every game they play. They can throw the football all over the field with Ryshaun Steel at quarterback and the two stud junior wideouts in Scott and Selders when they are healthy. At the same time, they can run the football using the power of Keaton as well as the speed of Davis. If the defense can continue to improve, then, Coach Masterson can see his team make a long playoff run at the end of the season. For the Lions, the score may have indicated that it was a 40 point loss, but the score should have been much closer and you could tell that the team was giving its all in the game. At some points in the game, it seemed that the Lions were going to end drives with touchdowns, but they just could not really translate those red zone trips into points. Next Friday, the 4-2 Northeast Vikings will get a week off with a bye before playing a bigtime district showdown against the Dunham Tigers. For the 0-6, Friendship Capitol Lions, they will face the Dunham Tigers next Friday. For more game recaps the rest of the season, make sure to check out our website at www.lafootballmagazine.com!