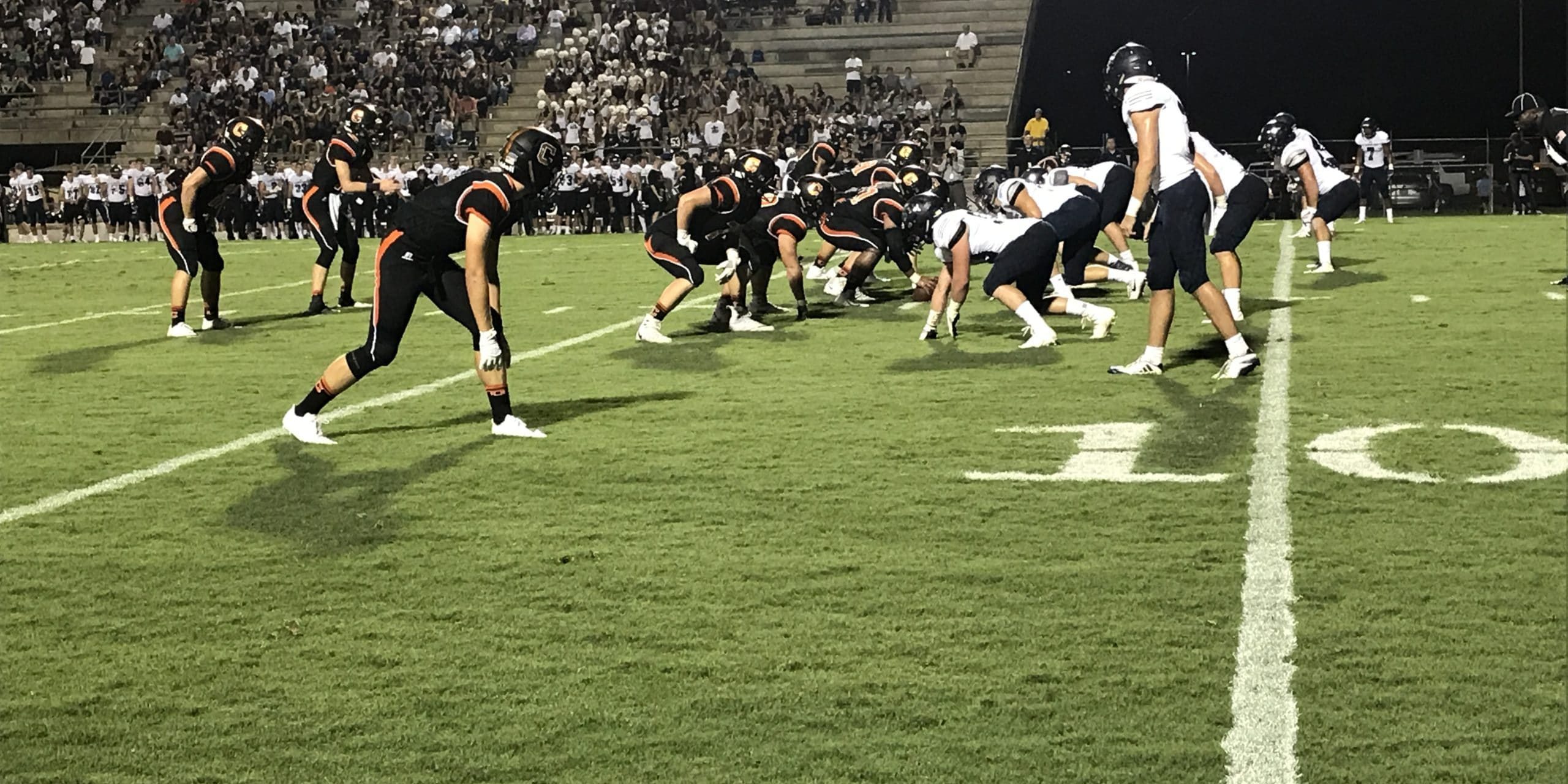 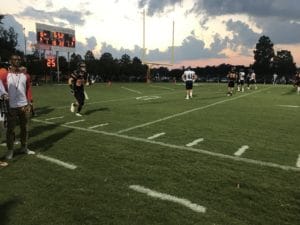 Catholic High senior WR Austan Hood jogs to the sidelines after scoring a touchdown in the first quarter. (Photo taken by Jace LeJeune)

This week features one of the most intriguing matchups in the state so far in the early couple of weeks of the young season at the newly renovated Olympia Stadium featuring the Catholic High Bears vs. the St. Thomas More Cougars. The Catholic High Bears, under first year Head Coach Gabe Fertitta, had not lost a beat since the retirement of legendary Head Coach Dale Weiner after defeating state championship contenders such as Parkview Baptist and Zachary in the first two weeks. However, the Bears took a major step back as they were dominated by the U-High Cubs 34-6. For the St. Thomas More Cougars under legendary Head Coach Jim Hightower, the Cougars just kept on building from their first state championship last season as they started the first three games at 3-0 and defeating Lafayette, Comeaux, and most impressively, Plaquemine High School by a combined score of 129-0. This week, St. Thomas More Head Coach Jim Hightower is not only trying to lead his team to a 4-0 start, but he is also trying to achieve a milestone as he goes for his historic 400th win. Only current John Curtis Head Coach J.T. Curtis has more wins with 561. This is a very important non-district game for a lot of reasons. For Catholic High, it was just trying to get on back and play like the team did in their first two games and prove that their game against U-High was indeed a fluke. For St. Thomas More, it was just continuing to showcase how dominant the team really is and to help Hightower accomplish his 400th win against a very familiar opponent in Catholic High. Well, something has to give.

After three games and twelve quarters, the stingy St. Thomas More defense did not give up a single point, but it only took a couple of minutes for the first game of the season for the Cougars to give up their first touchdown of the season. The Bears had a very impressive drive to start off the game because time and time again, the team had to convert on fourth and short to continue drives. All the gambles worked and as a result resulted in seven points. The touchdown came when Catholic High junior quarterback Cameron Dartez threw a beautiful ball to WR Austan Hood for a 22 yard touchdown to put the Bears up top 7-0. That was the score after the end of the first quarter. In the second quarter, the game started to get a lot of sloppy and the refs started to get more involved with throwing penalty after penalty. Overall, besides the penalties and mistakes, there was not a lot of action going on offensively in the second quarter as the score still remained at 7-0 for the majority of the quarter until the Bears had a second impressive drive which resulted in a Parker Smith 11 yard touchdown run to put the Bears up 13-0. Kicker Preston Stafford did not have the best half as he missed the ensuing extra point as well as a field goal right before the half, but he did make up for it later in the game. The Bears got the ball back with a couple of minutes left on the clock, but penalties stalled the drive and forced the Bears to run out the clock at the end of the half with the 13-0 lead over the Cougars.

In the second half, it was more of the same as the Cougar offense just couldn’t get going whether it was sophomore Scott Holstein or senior Peyton Landry at quarterback. St. Thomas More senior RB and arguably their biggest offensive playmaker Chris Primeaux was pretty much held in check over the course of the game. However, the Cougars were still in the game as the defense held their own and they got some breaks because of penalties that were called on Catholic High that eventually stalled drives including a long touchdown to Brandon Hubicz, which was called back by a penalty, but it was not just the Bears that had big plays called back. The Cougars struck big on a passing play from Holstein that put the Cougars inside the ten, but the Bears caught a break as there was an offensive pass interference penalty called against St. Thomas More.  The score still remained at 13-0 heading into the fourth quarter. The game was still controlled by the Bears, but knowing how explosive this high flying St. Thomas More passing attack can be, no team should ever feel too comfortable. Well, the Bears defense was definitely aware of that and kept being aggressive. The play of the game, unsurprisingly, was on defense as senior Catholic senior CB Patrick Mensah forced a fumble and returned the fumble 46 yards for the game clinching touchdown to make it 20-0. That would end up being the final as the Bears improve to 3-1 while the Cougars lose their first game of the season and fall to 3-1. 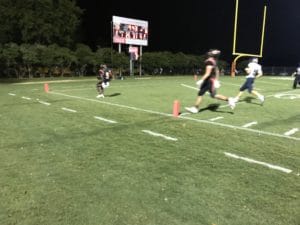 The player of the game should be based on an entire group. It was the St. Thomas More’s defense that was getting the attention heading into this game. Although the Cougar defense had a respective showing only giving up two touchdowns, it was the Bears’ defense that really stole the show. The Bears won the game how St. Thomas More won the first three games, and that was shutting down the opponent. Primeaux only had 60 yards rushing on the ground and both St. Thomas More’s talented quarterbacks combined to throw for less than 200 yards and an interception. This was an offense that was averaging about 42 points per game after the first three games. The defense also forced three turnovers including the fumble return for a touchdown by Mensah. The only time the Cougars really threaten to score in the game happened in the second quarter when the Cougars had the ball inside the Bears’ 22 yard line, but the drive resulted on a turnover on downs. It might not have been the best showing by St. Thomas More, but credit should be given to Coach Gabe Fertitta, the entire coaching staff, and the entire team for absolutely bouncing back in a big way against one of the best 4A teams in the state. Earlier today, Coach Fertitta told me that in the first four games of the season, they had to face against teams that won state championships over the last three years, which is pretty impressive. Nobody has as tough as a non-district schedule over the first four games than the Catholic High Bears with games against Parkview Baptist, Zachary, U-High, and St. Thomas More. If the Bears could get out of that tough four game stretch with a 2-2 record with a new head coach and a young team, that would be an accomplishment. However, the Bears exceeded expectations and are in great shape with a 3-1 record. There is no question that the Bears are in great hands with Gabe Fertitta at the helm.  Next week, the Bears have one more non-district game against Teurlings Catholic before starting district play the following week against St. Amant. Seeing what the Bears did in their first four games, there is no question that the Bears are a major favorite to win their district and is a team that could be a huge sleeper in making a state championship run. If I know one thing from St. Thomas More, that is to never count out Coach Hightower and the Cougars. This team is still one of the best, if not the best, 4A teams in the state. The offense has plenty of playmakers and a great defensive front seven. That will help them get far in contention for making a run at back to back state championship wins. Coach Hightower will have to wait for his 400th win next week against Franklinton.