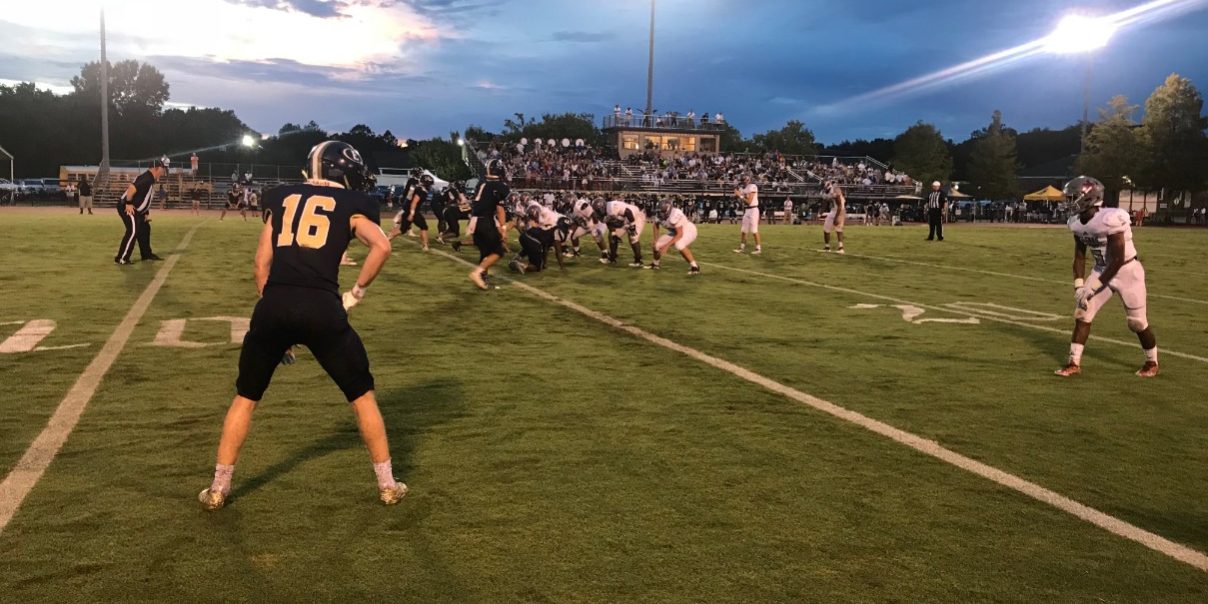 Finally, we get to talk about football games. We were not able to put up the Week One game recap due to posting the 2nd Team All-North and All-South Louisiana team for that week. Now, we get the opportunity to. The game that I was assigned to yesterday was the non-district showdown between the St. Thomas Aquinas High School Falcons versus the Episcopal High School Knights. The Falcons, led by first year head coach and former John Curtis great Randall Legette, are coming off a Week One 49-12 victory against Church Academy while the Episcopal Knights are coming off an upset 14-7 loss against the St. Michael High School Warriors. Talking to Episcopal Head Coach Travis Bourgeois before the game, he told me that the loss of several seniors really hurt them as well as an injury suffered by star senior RB Austin Jemison, who just recently received an offer from Southeastern Louisiana University. Heading to this Week 2 game, Bourgeois said that Jemison would be about 75% healthy for the matchup against the Falcons. For the Falcons, the week two matchup would be a huge opportunity to start off the Randall Legette era with a 2-0 start. As for the Knights, they were looking to prove that the St. Michael loss was a fluke.

In the first quarter, it looked like it was going to be a long game for the Knights as the Falcons took the opening kickoff 80 yards for a touchdown with senior RB Zach Gore putting the Falcons up with an early 7-0. However, the Knights were not going to give in. After an Episcopal punt, Falcons’ quarterback Ryan Dawsey made the first mistake of the game throwing an interception to sophomore cornerback Ethan Hook. The Knights took advantage of the turnover and capitalized on a 16 yard touchdown run by Jemison showing what he can do even though he is not 100% healthy. With the score being tied at seven, it set the stage for how this game was going to be. The Knights avoided a big mistake of their own in terms of getting points. After stopping the Falcons offense on the ensuing drive, the Knights were called for a roughing the punter penalty, which resulted in 15 yards and an automatic first down. Fortunately, the Knights forced a turnover on downs. At the end of the first quarter, the score was tied at seven a piece.

A couple of plays in the second quarter, the Knights grabbed their first lead of the game on a 57 yard touchdown pass from senior QB Cruz Crawford to senior RB Brandon Garrido. The Knights, even though are a running team, exploited the Falcon secondary on several occasions and this was just one of those occasions. Still, the Knights missed the extra point to only make it a 13-7 game. After a 41 yard completion from Dawsey to Falcons junior wide receiver Devon Wilson, Dawsey made another great play rolling out of the pocket waiting for the play to develop and ultimately finding senior wide receiver Adam Hetzinger in the end zone to tie the game at 13. With the successful extra point attempt, the Falcons took a 14-13 lead. Then, it was the Knights’ turn to score on the ensuing drive. After moving the ball on a 11 play 68 yard drive, Jemison punched it in for his second touchdown of the game to regain on the fourth lead change of the first half. After a couple of defensive stops, the Knights had a chance to add on to their lead before halftime with a field goal attempt, but the hold was not clean and the Falcons were able to tackle the Episcopal holder in the backfield. At the end of the first half, the Knights held a 20-14 lead with really being the biggest difference of the game being a missed extra point for Episcopal.

It was a quiet third quarter as Episcopal was playing ball controlled offense whether it was handing the ball off to Jemison or Garrido. It was very impressive how the Knights were running the football considering that the team only has one player that is over 200 pounds while the Falcons have three players that are over 300 pounds. Still, both teams were unable to score in the third quarter.

In the fourth quarter, everyone in the stadium knew that they were in for a great finish and that is what they got. After over a full quarter of no points from both teams, the Falcons did not hesitate to score early in the fourth quarter with a 34 yard rushing touchdown from Devon Wilson. Now, the most important play at that point was the ensuing extra point. Hetzinger kicked the extra point to put the Falcons up by one point 21-20. It seemed all was lost for the Knights as Falcons recovered their own onside kick, but the Knights defense stepped up and created another turnover on downs. With tough running by Garrido and Jemison, the Knights showed their success running the football on another long time consuming drive wearing down the St. Thomas Aquinas defensive front. The big play was Garrido escaping what would have been only a yard gain and turning it into a 15 yard gain. Two plays later, Garrido punched it in for the score on a six yard touchdown to put the Knights up late in the fourth quarter with a 26-21 lead. Coach Bourgeois decided to go for the two point conversion to put the Knights up by a full seven points and they were able to convert on the two point conversion. The Episcopal fans were going crazy at that point, but it was even crazier on the ensuing kickoff as the Knights recovered their own kick pretty much sealing the deal with under two minutes to go in the game and they hold on to defeat the Falcons 28-21.

The Knights played a well executed game and even though the Falcons made their plays, the feeling was that the Knights did a great job of controlling the tempo of the game. The rushing duo of Garrido and Jemison was the standout performance, but I was really impressed with how the offensive line played considering they were smaller. For the Falcons, they made plenty of splash plays, but were unable to take advantage of opportunities especially on fourth down conversions. For the Episcopal Knights, it was a huge win after their shocking Week One lost. For the St. Thomas Aquinas, it was a little bit of a setback, but this is a team with plenty of size and skill talent to be a factor the rest of the season. Next week, the St. Thomas Aquinas Falcons, who are now 1-1, will have their biggest challenge yet facing the defensive Division III state champion Catholic New Iberia High School Panthers while the Episcopal Knights, who also evens their record at 1-1, will face the undefeated Metairie Park Country Day High School Cajuns.