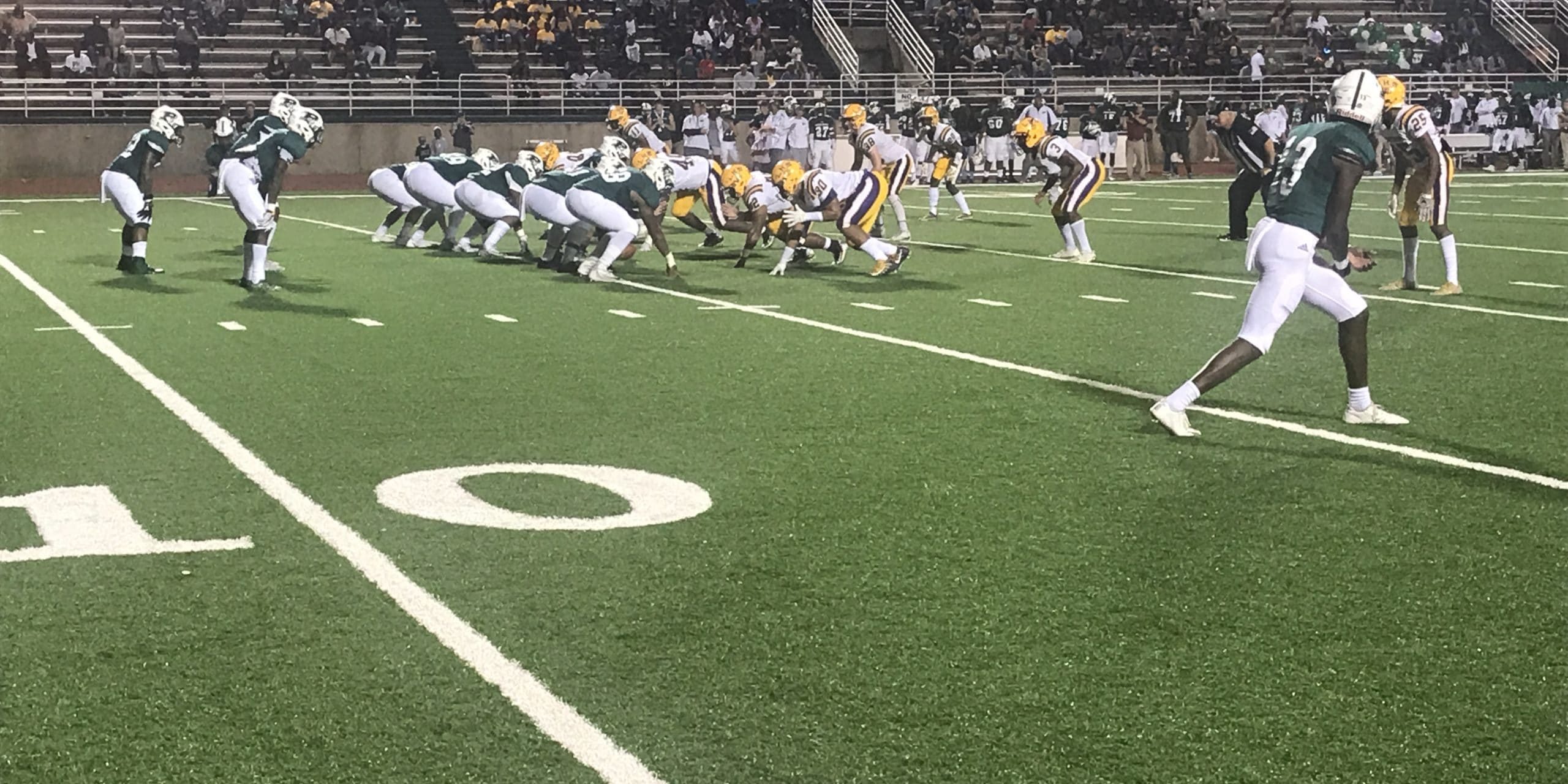 What a regular season it was as there were plenty of district championship battles that were won this week. The matchup between Lutcher and Plaquemine was not one of those district championship games, but it was a very intriguing battle between two of the most consistent football programs in the state over the last five years. In District 6-4A, it was the Parkview Baptist Eagles that have clinched the district championship with an undefeated record in district and wins over Plaquemine and Lutcher respectively. For the Plaquemine Green Devils, this will be the first time since the team did not win the district championship since 2012. The Green Devils, led by Head Coach Paul Distefano, entered this matchup with a 7-2 record with their only losses coming to Parkview Baptist and the St. Thomas More Cougars. Before the season, it sure looked like that this could be the best Plaquemine team since the Green Devils made the semi-finals coming up a game short of the Superdome in 2014. With players like LSU commit Nelson Jenkins, Louisiana Tech commit Wayne Toussant, and plenty of others, but the problem has been mostly injuries for the Green Devils. The Green Devil offense lost their starting quarterback Herb Thomas to a career ending hip injury and not too long after, the backup quarterback Michael Sproles went down with an injury last week, which leaves junior QB Dontayvion Wicks to make his first start against Lutcher. They also lost Nelson Jenkins to a season ending injury similar to how former LSU and current Miami Dolphins defensive lineman Davon Godchaux got injured in his senior season at Plaquemine. For the Lutcher Bulldogs, under Head Coach Dwain Jenkins, they entered the season trying to accomplish something that the Bulldogs have never accomplished and that is back to back to back state championships after winning state championship in 2015 and 2016. However, this season has not been easy as the Bulldogs lost plenty of starters from last year’s team including Jontre Kirklin (LSU), Al’Dontre Davis (TCU), and others. Heading into the Plaquemine game, the Bulldogs were 4-5. The team showed their youth losing some close games to Dutchtown, St. James, and Parkview Baptist, but the team has turned the corner going on a three game winning streak. Both teams are heated rivals and even though a district championship is not on the line, you know that both teams want to enter the playoffs with a win.

Plaquemine senior ATH Wayne Toussant gets tackled after a 60 yard run to put the offense inside the 20 to help pull the Green Devils away. (Photo taken by Jace LeJeune)

It was definitely a wacky first quarter just to say the least, but in a good way if you are a Green Devil fan. Even with all of the injuries happening at Plaquemine, one thing has stayed constant and that is Plaquemine’s best playmaker Wayne Toussant. For the first score of the game, Toussant took a handoff, made one guy miss, and broke into the open field. Once an explosive playmaker like Toussant breaks in the open field, just put six points on the board. It was an 82 yard touchdown run for the Louisiana Tech commit and it would only be the first of the big time plays the electrifying player makes. After the extra point, it didn’t take long for the Green Devils to score again as the Lutcher Bulldogs muffed the kickoff return allowing the Green Devils special teams unit to fall on the ball in the endzone and before you can even blink, the score was 14-0 Green Devils. The series of unfortunate events continued on Lutcher’s offensive play after the fumble and that was when star Bulldog receiver Gregory Clayton fumbled the football and the Green Devils once again recovered the football. The turnover gave the Green Devils’ offense a short field to work with and as good teams do, they capitalized on the turnover with a Herman Christophe three yard touchdown run to put the Green Devils up 21-0. As bad as the first quarter was for the Bulldogs, they did not quit. Lutcher junior QB Colby Bourgeois led the Bulldogs down the field on a long drive. However, it looked like the Green Devils were going to stop the Bulldogs as Lutcher had to deal with a 4th and goal. Coach Jenkins decided to go for the touchdown on fourth down. Bourgeois threw a jump ball to Lutcher’s best offensive weapon in Gregory Clayton, who showed why he was Jarvis Landry’s (Lutcher/LSU/Miami Dolphins) cousin, with a great catch in great coverage. The touchdown made it 21-7 and gave some momentum to the Lutcher team. However, just before halftime, the Green Devils came back with a great response as Wicks led the team down the field and threw a great football to senior WR Percy Butler for a 14 yard touchdown with 22 seconds to go into halftime to put their lead back at 21 with a 28-7. That would be the score at halftime.

The Lutcher Bulldogs started the second half the same way when they were down by 21 the first time and that was a quick short passing attack down the field and once again, the junior quarterback looked in the direction of Clayton, who caught his second touchdown of the night. The score was 28-14, but unfortunately for the Bulldogs, that was how close it was going to get as the Green Devils broke away with three unanswered touchdowns to make it 49-14 before the Bulldogs wrapped the game up with the final score of the night by senior RB Daevon Adams with a two yard touchdown run to make the score 49-21.

The Green Devils needed a big time game from Wayne Toussant as the offense had to use their fourth different quarterback and they got that production as the sample size may not have been much with eight carries, but the production was way too much to handle as he had over 200 yards of offense including the 82 yard touchdown run. Christophe provided the power running for the offense with two more rushing touchdowns. Defensively, it was the turnovers that also gave them an edge for the Green Devils. All those factors were keys to the Green Devils’ victory, which helped clinch them a home playoff game next week and a lot of momentum heading to their first round game with a 7-3 record. For the Lutcher Bulldogs, they had a great game from Gregory Clayton, but the turnovers and the inability to stop the run were big keys to Lutcher’s loss. Even though the Bulldogs post a rare losing record this season at 4-6. This is still a team that is still dangerous when the playoffs hit as they have plenty of skill players they can throw the football to and the close matchups that the team has had over the course of the season will help them in the playoffs. Both teams will find out what playoff opponent awaits tomorrow.