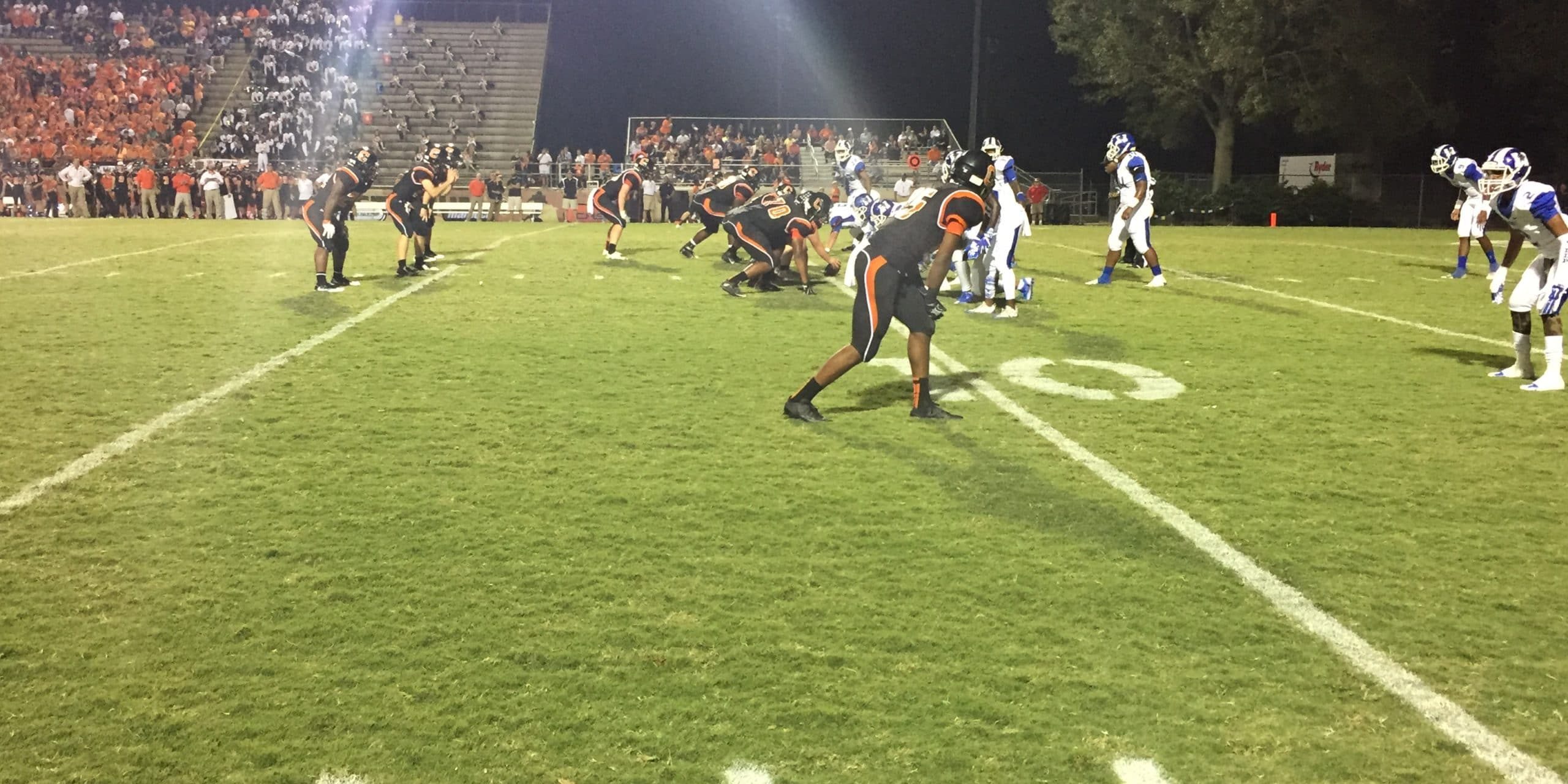 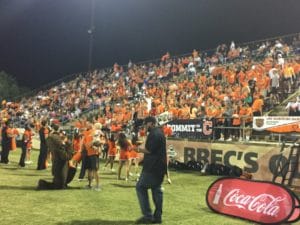 The Catholic High fan base shows why they are one of the best in the state. (Photo taken by Jace LeJeune)

The Catholic High School Bears of Baton Rouge headed into this game at 9-0 and are trying to accomplish something that not even last year’s state championship team accomplished. That is an undefeated regular season. The Bears are seeking their first undefeated regular season since 2006 when the Bears finished the season at 13-1 making the semi-final round against Acadiana. The team that they faced tonight was the McKinley Panthers who came in with a 4-5 record. There is a saying that games are not won on paper but won on the football field. Well, the Bears won in both ways tonight in very impressive fashion.

In the first quarter, the Panthers played right there with the Bears for most of the first quarter until the Bears’ offense drove down the field 61 yards for the first touchdown of the game with a six yard run by Clyde Edwards-Helaire, who made our 1st Team All-Louisiana Team in the pre-season and is a current LSU commit. Helaire was battling injuries all the season and now, the star running back is back in his regular form just in time for the postseason. Helaire had a great game accounting for 168 yards of total offense and four touchdowns.  The Bears did a great job of balancing their offense with offensive co-ordinator Gabriel Fertitta balancing the run and the pass. Catholic High QB Zach Crawford completed over 62% of his passes for 278 yards and three touchdowns. Catholic High also showed its depth in the running game with the likes of James Berrigan, Ben Miles, and Connor Leblanc, who all averaged over five yards per carry. Heading into halftime, the Bears were controlling the game as the Bears led the Panthers 26-0  until McKinley’s Lil John Lewis had a big gain putting the Panthers into field goal range. The Panthers were a little late in snapping the football as it seemed that the clock ran out in the first half, but McKinley Head Coach Ken Hilton called a timeout with one second left in the half. Kicker Anthony Raby would make the field goal to end the first half with Catholic High having the 23 point lead. As just as impressive the offense was, the defense lead by defensive coordinator Matthew Burmaster was just as impressive. The McKinley defense was hanging in the first half but two interceptions by Catholic High defensive back Patrick Mensah put the Bears in great field position. When teams play a team like Catholic High, they can not afford to make mistakes, and it showed in the first half of the football game with the turnovers. With a 23 point lead heading into the second half, the Bears rested their starters and allowed the backups to play. The backups showed that they can play as well.  They made plays on both sides of the football. The offense scored a couple of touchdowns and the defense stepped up with a fumble recovery by defensive end Elijah Reames, who returned it 52 yards for the touchdown. McKinley added a late touchdown to make the scoreboard look a little bit more appealing for the Panthers, but the Catholic High Bears’ dominant season continues. The final score was 46-9. 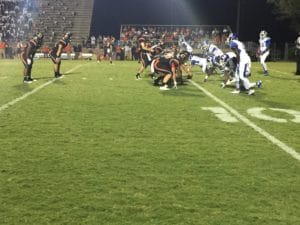 The Catholic High Bears threaten to score on the McKinley Panthers. (Photo taken by Jace LeJeune)

The leading stat leaders in the game for the Bears were Crawford, Berrigan, who ran for 70 yards and a touchdown, and Edwards- Helaire as a receiver finishing with 74 yards receiving and two touchdowns. For the Panthers, it was QB Treylan Nelson, Lewis, who ran for 97 yards, and Josh Quiett who finished with six receiving yards. The Bears had 402 total yards of offense to the Panthers’ 240 total yards of offense. The Bears’ passing defense was outstanding as the secondary only gave up seven passing yards the entire game. Those are some unbelievable stats and I would like to thank Mr. David Butler for providing me with the stats for tonight’s game.  At the end of the regular season, the Bears are now 10-0 and looking to find out who they will play in the playoffs. Not only did the Bears finish the season undefeated but they also clinched the District 5-5A championship. This is the 5th straight year that the Bears either won the district outright or tied for the district championship. The McKinley Panthers  finished the regular season at 4-6 under Head Coach Ken Hilton. Even though it was a tough night for the Panthers, there is a lot of talent on the football field and can make things very interesting come playoff time. There is a good chance that both teams have to face each other again in the playoffs as both teams might be on that side of the ladder. We will just have to wait and see on Sunday what all the exciting playoff pairs are. The Catholic High Bears led by Head Coach Dale Weiner are not experiencing any signs of a championship hangover, but the tough road to the Dome is just beginning with tough teams like John Curtis, Evangel Christian, Brother Martin, Scotlandville, Archbishop Rummel, Jesuit, etc. One thing is for sure and that it is going to be a very interesting couple of weeks for the Bears, but it sure is great to be a Catholic Bear as of right now.