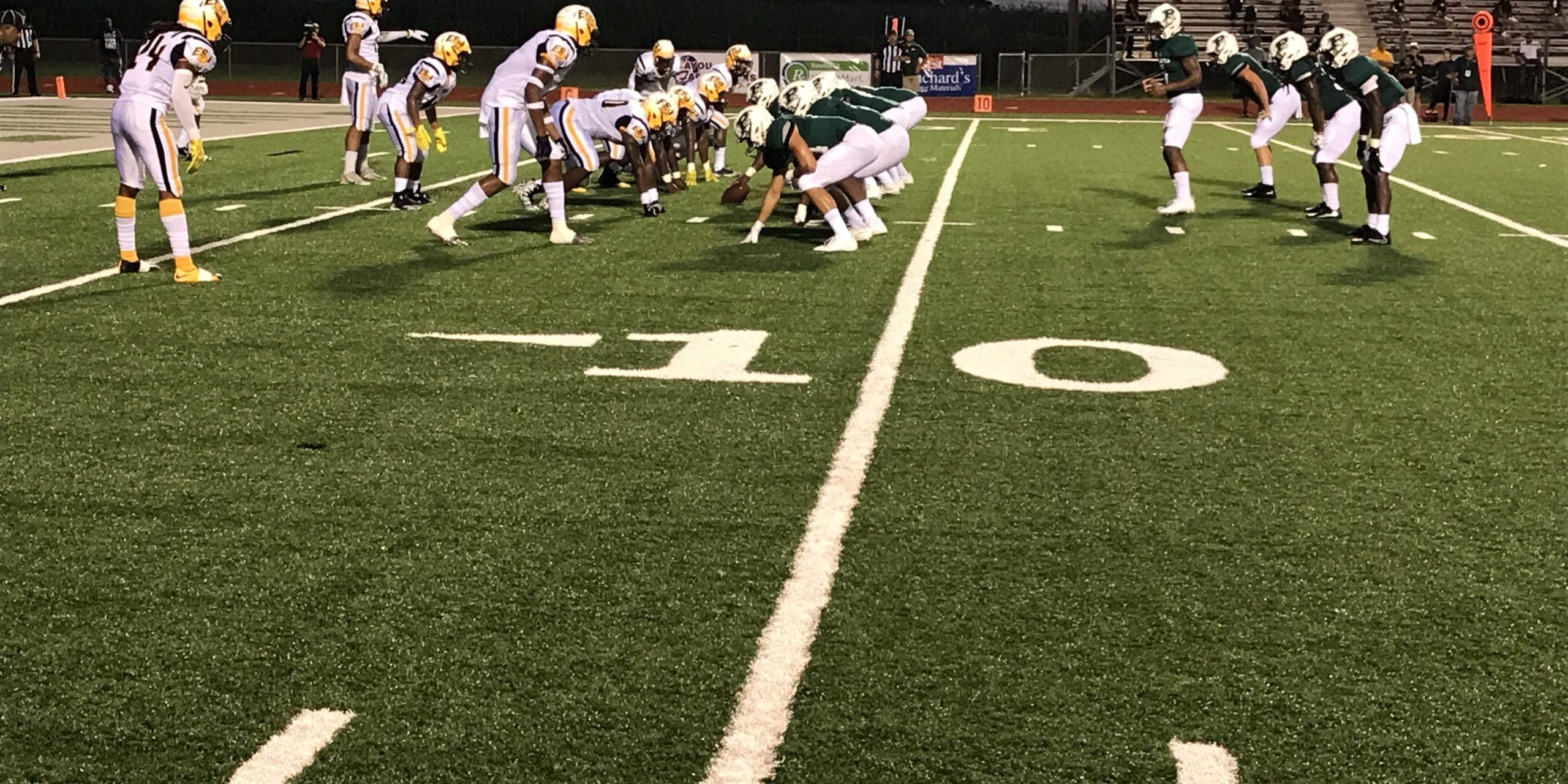 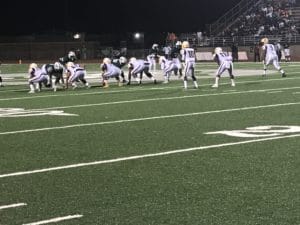 Thank the Heavens! Louisiana High School Football is finally here! Jamborees kicked off last week, but this week is different as the regular season has begun. The 2017 season will be a very interesting year as there were many games this week that were very intriguing. I was assigned to the Plaquemine-East St. John game at Plaquemine High School. It was a matchup between two very talented teams. The Plaquemine Green Devils, led by Paul Distefano, are coming off their fourth straight district championship when they went 9-4 losing to McDonogh 35 on a two point conversion play in the quarterfinals last season. This season, they will try for their fifth consecutive district title, and if they do, they will definitely earn it as football powerhouses Parkview Baptist and Lutcher have joined the district. The Green Devils may have their best team since 2014 when the team reached the semi-finals. The Green Devils may have lost great players due to graduation in Todd Harris (LSU), Abraham Delfin (Army), Kevin Dominique (Ball State), and Trey Williams (Northwestern State), but the team returns stud senior players like Wayne Toussant, LSU commit Nelson Jenkins, Codi Willis, Michael Sproles, Percy Butler, Andre Riley, and others that have been big impact players during their time. They are loaded at every position and are a huge preseason pick to make a deep run in the playoffs. For the East St. John Wildcats, under third year head coach Alden Foster, the team is coming off a 5-6 season in which they lost in the first round of the playoffs to Barbe. It may have been an up and down season, but it is pretty incredible that they achieved that record with such a tough schedule. The Wildcats are very athletic, but maybe not as deep as the Green Devils, but these guys can play. The Wildcats do lose their QB Marquise Darensbourg and WR CJ Turner, who both went on the continue their college careers at Southeastern, but the Wildcats don’t lack any skill position players. The main headliner of the group is Javon Antonio, who is an athletic freak at 6-4, 220 and can run a 4.55/40. He can play WR, LB, and DE. Other skill position players such as Shelvin Keller, Pershing Toney, Hoxie Brown, and Duke Crosby will also make an impact. Once the linemen continue to grow throughout the season, this can be a team that makes a lot of noise. Now, these were our thoughts on both teams before the season starter, but we don’t know what we will see from both teams until we can actually see them play for the first time and tonight we did.

The Wildcats started off with the football to start the game and the Wildcats decided to go for it early on fourth down, but the Green Devils defense made the stop. Good teams like Plaquemine take advantage of good field position and that is exactly what they did. The Green Devils run a two quarterback system and started with Herb Thomas, who ran for a 39 yard touchdown to put the Plaquemine Green Devils up top 7-0. After the touchdown run by Thomas, both defenses settled in the game as both offenses were really sloppy in the first half. East St. John had very low snaps that resulted in sacks while the Green Devils jumped off sides plenty of times. The Wildcats were trying to throw it out to their big playmaker Javon Antonio plenty of times early in the first quarter, but Plaquemine’s Percy Butler did a great job in making sure that Antonio was not going to be a factor in the game. He was not a factor as he did not have a catch in the game. The second score would come in the second quarter as once again, the Green Devils took advantage of great field position and they put in the hands of electrifying playmaker Wayne Toussant, who committed to Louisiana Tech, and he outran to the outside for a six yard touchdown run to put his team up 14-0. However, the Wildcats did not go away as East St. John junior QB Duke Crosby led the team down the field on a 11 play drive resulting in a touchdown pass to senior TE Keith Matt, but as soon as the Wildcats got the momentum, the Green Devils took it back as the Wildcats decided to kick the ball to Toussant, which was proved to be a bad decision as he broke one tackle, made a move to the outside and when everybody is trying to catch Toussant, you know that it’s over. The Green Devils extend their lead back to 14 to make it 21-7. The play of the first half had to be right before halftime when Crosby threw an interception as Plaquemine junior DB J‘Vonte Powers jumped in front of the pass and seemed to return it all the way for a touchdown until a block in the back penalty was called. The Green Devils were going to try and take advantage of the turnover, but Thomas got injured on a short run before halftime and never returned in the ball game leaving the quarterback duties to their other quarterback Trey Leblanc. The score remained 21-7 going into halftime.

In the third quarter, it was the Wildcats who got things started as the offense went down the field once again with Crosby hitting senior WR Cameron Grant for a 38 yard touchdown. However, the extra point was blocked and the score was 21-13.  It seemed that East St. John was going to close the gap again with an interception by Wildcat senior DB Mark Stewart, but it turned out to be a blessing in disguise for the Green Devils as Stewart intercepted the pass inside their own five yard line. The Green Devil defense forced a three and out and the offense got the ball in great field position for a third time. Once again, it resulted in a touchdown. This time, it was senior H-Back/TE Michael Sproles with a seven yard rushing touchdown. From that point on, the Green Devils really took control of the game as their offense grinded out long physical drives and the Wildcats simply did not have the ball enough. To close the game with under three minutes remaining in the game, Sproles went under center as the quarterback and used his 6-1, 200 pound frame to not only pick up the first down, but to break through the line and seal the game with a 43 yard touchdown run. That would be the final score of the night as the Green Devils defeat the Wildcats 35-13. 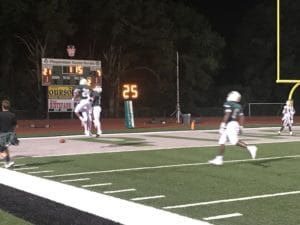 Plaquemine DB J’Vonte Powers celebrates with his teammates after coming down with the interception before halftime. (Photo taken by Jace LeJeune)

The Green Devils did turn the ball over and did have a lot of penalties, but the defense had a great game forcing a couple of turnovers and keeping the Wildcats’ best offensive weapon out of the game. Offensively, penalties hurt a lot of drives and their offense is based on staying ahead of the chains, but whenever the team got great field position, they sure took advantage of it. For the players that stood out to me the most for Plaquemine, it was between three players. Wayne Toussant, Michael Sproles, and Percy Butler were really impressive. Toussant and Sproles scored two touchdowns each and were the biggest playmakers offensively while Butler was the key player in the secondary covering Antonio. For the Wildcats, they just could not move the football enough and what really cost them in this game were just the inconsistency of the snaps because whenever the Wildcats got the offense moving, a bad snap would put them behind the chains. Penalties, injuries, and turnovers are expected in an opening game of the season, but as the season goes along, both teams will play a lot better and talent wise, both teams could end up making big runs at a state championship. For Coach Distefano and the Plaquemine Green Devils, they start the season with a big victory and are 1-0. Next week, they will face off against the Port Allen Pelicans, who got a big win over West Side rival Brusly High School. For Coach Foster and the East St. John Wildcats, they start the season at 0-1, but played one of the best teams in 4A tonight. Playing a great opponent like Plaquemine will help them as the season goes on in power ratings as well as playing other teams. Next week, they will play against West Jefferson, who also lost to a big time powerhouse team in Hahnville. That will be an important game for the Wildcats as they try to avoid an 0-2 start.