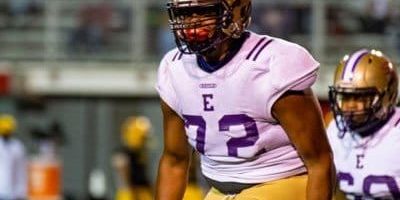 Malachi Preciado is an incoming senior center at Warren Easton. Coming off a stellar junior season where he garnered 1st team All-District honors, Malachi has grabbed the attention of numerous schools including Louisiana Tech, Purdue, Memphis, ULL, and Tulane.

To prepare for the upcoming 2021 campaign, Malachi has been working diligently on improving his leadership skills.

Malachi says “I want to take on the role of being the guy everyone looks up to on the team.”

He has set lofty goals for himself in 2021 stating that he wants to win the state championship, and also earn first team all-state honors.

Malachi also competes on the track and field team, competing in shot put and discus.

He also enjoys watching anime. His favorite show to watch is “Naruto”.  His two favorite NFL players are Ryan Jensen and Jason Kelce.  Malachi says he wants to major in education in college, and get into coaching when his football career is done.  Malachi says his parents are his greatest inspiration in life. He appreciates their support of him, and he recognizes how hard they work to make sure that he is provided for.