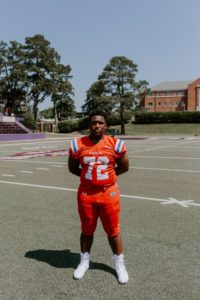 Jiren Rattler & Trey White: This marks the second recruit video we have posted this year on two Evangel Christian Academy recruits. The first video in which you can find on our website featured Arizona State quarterback commit Blake Shapen and fullback Jake Harvill. The second video features two more players that were featured on the front cover of our North Louisiana magazine in senior wide receiver Jiren Rattler and senior defensive tackle Trey White. It just comes to show you how much talent the Eagles have on both sides of the football whenever there are multiple players selected for the front cover of the magazine. The Eagles’ talent has carried the team to a 5-4 record. Even though a 5-4 record may not be high for the program’s standards considering the winning tradition the team has, but it seems that the team has caught its stride heading into the Division II playoffs having won four straight games after a 1-4 start. Senior leaders Rattler and White have helped guide the ship for the Eagles. Rattler is the team’s number one receiver for its star quarterback. The All-District and All-City wide receiver was not only on the front cover of the magazine, but also made our 1st Team All-North Louisiana team as well. On defense, White may not be the biggest or most talented defensive lineman Coach Byron Dawson has coached, but he is definitely one of the hardest workers he has coached at 5-11, 265 pounds. When not playing football, White also is on the school’s wrestling team and helps the school’s autism program as a volunteer teacher. These two players along with the rest of the team have finished the regular season and now are waiting for their playoff opponent. If the season ended today, the Eagles would be the number nine seed in the Division II playoffs.

In this recruit video interview with Lee Brecheen, we caught up with the two Evangel Christian Academy seniors before the season to talk about what it is like being coached by Byron Dawson, their strengths, weaknesses, and what the Eagles need to do to win their 15th state championship in school history! Click the link below to check the interview out!