Posted by: Jace LeJeune 22 days ago 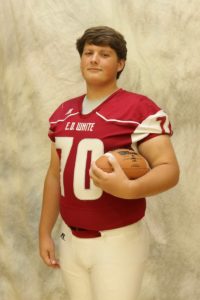 Jhy Orgeron: Another lineman with the last name Orgeron from South Lafourche High School will go on to play college football just as LSU head football coach Ed Orgeron came out of South Lafourche to play for Northwestern State. However, unlike the National Championship winning head coach, Jhy Orgeron will take his talents to play for the Southeastern Louisiana University Lions led by head coach Frank Scelfo. Ironically, the 6-4, 270 pound offensive lineman chose the Lions over Southland Conference heated rival Nicholls State. According to Louisiana Football Magazine’s recruiting expert Lee Brecheen, Orgeron is another big pickup for Coach Scelfo, who is coming off great momentum after leading the Lions to an 8-5 record along with a playoff victory.

“I picked Jhy on the 1st Team All-South Louisiana team and on the cover of the South Louisiana football magazine cover because he is from the Bayou and he is tough,” Brecheen said. “I saw him play a lot as a sophomore and as a junior. He is a tough kid that plays offensive tackle, but can make a great offensive guard in college. You don’t have a lot of those kids running around that often.”

Gavin Clements: Once again, out of the Houma-Lafourche area, another offensive lineman signs to play at the collegiate level. This time, E.D. White High School senior offensive lineman Gavin Clements has signed to play for the Arkansas-Monticello Boll Weevils. At 6-4, 280 pounds, Clements has been one of the most consistent as well as one of the most versatile players at his position group in the state. Over his career playing for the Cardinals, Clements has played all across the line of scrimmage whether it has been at tackle, center, or guard. Louisiana Football Magazine’s recruiting expert Lee Brecheen also put Clements on the 1st Team All-South Louisiana team as well as on the front cover of the South Louisiana Football Magazine edition.

“Gavin Clements is a sleeper with a ton of upside, and has not even reached his full potential yet,” Brecheen said.