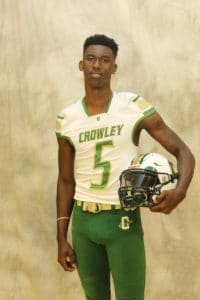 In today’s recruit interview, we go to Catholic High School where LeJeune got the chance to talk to dual threat QB/WR Marquis Garrett from Crowley High School!

Marquis Garrett: At 6-3, 185 pounds with 4.5/40 speed, Crowley High School senior QB/WR/ATH Marquis Garrett is one of the biggest DI sleepers in south Louisiana. Garrett’s talent runs in the family as his father Shane Garrett was a pretty good football player himself as a slot receiver. During his playing days, Shane Garrett played college football at Texas A&M from 1988-1992 and was later drafted by the Cincinnati Bengals. Marquis Garrett not only has the chance to fill in his father’s shoes, but maybe even supplant them. As of now, Garrett has not received any offers, but he has been contacted by a lot of DI schools. Being recruited as a wide receiver, Garrett has also shown that he can play quarterback as well accounting for 1,500 yards and 23 touchdowns as the starting quarterback last season. Now, with another season under his belt, Garrett is a name flying under the radar that can be making some more noise by the end of the season.

In today’s recruit interview, Louisiana Football Magazine’s Jace LeJeune goes 1 on 1 with Crowley senior ATH Marquis Garrett as he talks about his skills, his offers, upcoming visits, what he brings to colleges, his expectations for this upcoming year, and much more! Check out the interview below!