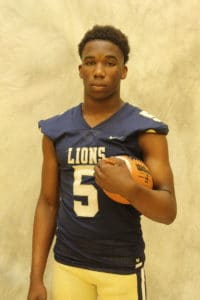 In today’s recruit interview, we go to Catholic High School where Brecheen got the chance to talk to Oklahoma Sooner Commit LB Edgerrin Cooper from Covington High School!

Edgerrin Cooper: Everyone knows how explosive the Oklahoma Sooners are offensively. However, it is the Sooner defense that got a big time gift in Covington High School senior LB Edgerrin Cooper. The 6-2, 215 pound linebacker is one of the best defensive players in the state in a year which is full of big time DI players throughout the state of Louisiana. With offers from Troy, Southern, Southeastern, Nicholls State, Tulane, ULL, Louisiana Tech, Mississippi State, ULM, South Alabama, Louisville, Memphis, Arkansas State, Middle Tennessee, Colorado State, Nevada, Southern Miss, Oklahoma State, Michigan, and UCF, it was the Oklahoma offer that was too good to pass up for the three star linebacker. After announcing his commitment to Head Coach Lincoln Riley and the rest of the Oklahoma Sooners, Cooper is now focused on leading the Covington Lions to a deep playoff run in 2019. Last season, the District 6-5A MVP had a huge season on both ends of the football. Offensively, as a running back, Cooper ran for 385 yards and six touchdowns on 64 carries. Defensively, Cooper showed off his incredible athletic ability and instincts as a linebacker becoming a tackling machine with 106 tackles, 13 tackles for loss, two sacks, four quarterback hurries, and an interception. This season, there will be even more expected from Cooper, who may even play a little quarterback, but in order for the Lions to accomplish their goals, they would need all the production that they can get from its best player.

Before Edgerrin Cooper made his announcement to commit to Oklahoma, Louisiana Football Magazine’s Lee Brecheen went one on one with the Covington star running back/linebacker at our South Magazine cover photoshoot to talk about the upcoming season, his goals for the season, his favorite player and team growing up, and much more! Click the link below to check out the interview, which was filmed by Will Stout!