Posted by: Jace LeJeune 13 days ago 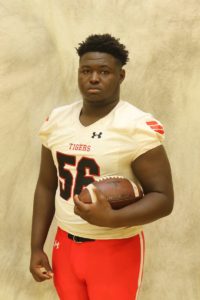 In today’s recruit interview, we go to Catholic High School where Lee Brecheen caught up with East Iberville High School senior OL/DL and Mississippi College signee Justin Hollins before the start of the season!

Justin Hollins: The East Iberville Tigers have been one of the best stories in Louisiana high school football over the last couple of seasons under head coach Ron LeJeune. Before LeJeune took the head coaching job at East Iberville, the program only managed to win one game in a three year period. Ever since in a two year period, the Tigers have won 21 games including three playoff victories. Along with LeJeune and his coaching staff, one of the biggest reasons for this incredible turnaround is the play and leadership of two way lineman Justin Hollins. At 6-0, 270 pounds, Hollins not only anchored both fronts, but was the vocal leader for a team that was trying to build on the foundation. Because of his talent and efforts, Hollins achieved something that not many East Iberville football players have accomplished, and that is earn an athletic scholarship. In fact, the All-District performer received two offers from Mississippi College and Arkansas Monticello. In the end, Hollins signed with the Mississippi State Choctaws making him the first East Iberville Tiger to sign with a collegiate team since 2006.