Westgate High School senior WR and LSU commit Kayshon Boutte dominated with seven catches for 224 yards and two touchdowns in the Tigers' 27-6 second round victory over the Assumption Mustangs. (Property of LAFM) 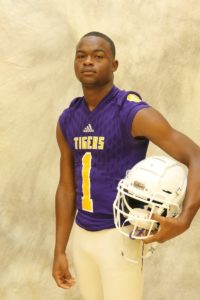 Kayshon Boutte: Since this is LSU-Alabama week, we have decided to do today’s recruit video spotlight on a player that is getting recruited heavily by both schools in Westgate High School senior wide receiver Kayshon Boutte. Boutte’s speed and playmaking ability has impressed the likes of both Ed Orgeron, Nick Saban, and others enough to offer him a scholarship. Louisiana Football Magazine’s recruiting expert Lee Brecheen has also been very high on the former number one player in the state putting Boutte not only on the cover of the South magazine, but also on the 1st Team All-South Louisiana team and the Tiger Rag’s Dirty Dozen.

“Kayshon Boutte is a great athlete that plays wide receiver, defensive back, and even plays quarterback for the team,” Brecheen said. We are talking about a guy that can run a 10.5 in the 100 meter relay. He can be as good as he wants to be. I don’t know what you will do with him in college, but I guess you have to worry about that later. Boutte can be a great cornerback like Derek Stingley Jr. (Dunham/LSU) or he can be an All-SEC slot receiver like Percy Harvin (Florida/NFL). He could also be a great kick and punt returner in the SEC as well. In fact, he could be an All-American return specialist in college. He is the fastest, toughest, and best athlete in the state coming out of this year.

Boutte is not only a speed guy, but he is also a football player that can play many different positions at 5-11, 180 pounds. Last season, Boutte broke out onto the scene with 1,524 total all-purpose yards and 24 touchdowns while leading the team to a 7-5 record, which included an upset playoff victory over the Plaquemine Green Devils in the Class 4A playoffs. The Westgate Tigers enter this season as one of the state’s fastest teams, and the four star wide receiver recruit has a lot to do with it. Boutte is not only a current Tiger, but there is a great chance that he will also be a future Tiger as he had committed with the LSU Fighting Tigers as a junior. Still, there is work to be done for the Westgate Tigers as the team is currently 7-2 on the season with one more regular season game to play. As of now, the Tigers are the number six seed in the Class 4A playoffs, but we will not know for certain until the end of this week. However, we will know one thing is for certain and that is #1 will be ready.

In today’s recruit video interview, Lee Brecheen caught up with Westgate High School senior wide receiver and LSU commit Kayshon Boutte to talk about his decision to commit to the Bayou Bengals, what makes his speed standout, the team that he is excited to play the most, and more!

2019-11-08
Jace LeJeune
Previous: Dunham High School’s Sleeper Rhett Guidry Does It All For The Tigers
Next: Iota’s Record Setting Running Back Luke Doucet Continues To Pad On The Numbers