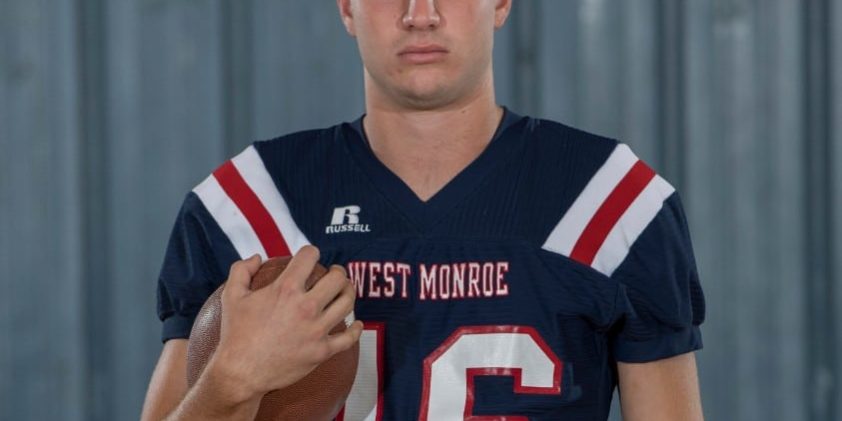 The West Monroe football team had a dominant regular season after reaching the Class 5A state championship game the year before. The Rebels went undefeated in the regular season winning their district and clinching the number one overall seed in the playoffs. However, the team’s run back to the Superdome ended in the semi-finals losing to eventual 5A state champion Zachary. It was a dominant season that ended in very disappointing terms. A player that the Rebels could have needed during last season’s run was senior punter Kevin Christopher Toms. Heading into the season, Toms was regarded as one of the best punters in the state after being named All-District the year prior. Not only is he a very talented punter, but he was also a pretty good receiver to bat. Louisiana Football Magazine’s recruit expert Lee Brecheen had a lot of praise for Toms entering the season as he put the West Monroe two position player on his first team All-North Louisiana team as a punter.

“Kevin Christopher Toms has a strong leg,” Brecheen said. “Toms is really coming on as he is filling out more. He is a steal for colleges as he averages over 40 yards per punt along with over four seconds in hang time.”

The West Monroe senior entered his senior season trying to improve on his productive junior season in which he averaged over 40 yards per punt. However, things turned for the worse as Toms tore his ACL and had to miss the rest of his senior season. For Toms, it was a difficult point in his life to see the teammates that he has played with for many years and not be out there with them for one final time.

“It was very difficult but I stayed strong for them and cheered them on and tried to coach up the ones taking my spot,” Toms said. “It was something I couldn’t do anything about so I just dealt with it the best way I could.”

That is exactly what he did. Instead of complaining about the injury ruining his season, he took advantage of it by cooperating while cheering on the rest of his teammates. In fact, the injury has helped him even grown more not only as a player, but as a person as well.

“I realized how mentally strong and determined I was to get better, which helped me get physically stronger and get ready for the next level,” Toms said.

At 6-3, 190, Kevin Christopher Toms is not your average punter. He is a really good athlete that has played different positions as well as different sports. It is safe to say that Toms’ athletic career is defined as being pretty busy.

“After football season, I go straight to soccer,” Toms said. “Then I would straight into track season and then into spring football, I liked stay busy with athletics and I feel like it just made me better in every way.”

The multi sport athlete also played basketball in his freshman year, but he had to quit because of its conflict with soccer. As a track runner, Toms has had a lot of success placing first place in district and regionals on the 4×4 relay team and regionals along with being fourth in the entire state. Toms’ athletic ability has set him apart from a lot of other players at his position and as a result, it has helped him with getting looks from different colleges.

“My biggest strength is my athleticism from playing other sports and other positions so I’m more then just a punter,” Toms said. “Also, I have the natural ability to punt because I did not get a punting coach until after my junior football season.”

What has been more impressive than Toms’ raw ability and athleticism is what he does off the field as well as in the classroom.

“In my senior year, I received the Don Shows (legendary West Monroe Head Football Coach) award,” Toms said. “It is a great honor for my city and only one senior gets it a year. I was also on the LHSAA Academic 5A All-State team.”

Those accomplishments speak volumes to not only what kind of football player Kevin Christopher Toms is, but the type of person that he is off the field. Even though Toms suffered a serious injury that prevented him from playing in his senior season, it did not stop schools from continuing to pursue him including the University of Louisiana-Lafayette in which the senior punter ended up signing with in the end.

“The reason ULL was my choice was everything there was awesome,” he said. “The facilities and coaches were great, but most of all, they never gave up on me through even after being injured. I actually received my offer while I was injured.”

ULL Head Football Coach Billy Napier and the rest of the coaching staff have stayed committed to a player that is coming off a difficult injury especially for a punter, but in return, they are going to get somebody that is willing to work in order to please the people that took a chance on him.

“I am going to come in with great work ethic and the intent of doing my job every-time as is needed,” Toms said. “My experience of playing different positions has helped me a lot knowing the game more, and it helped in any sticky situations from a wild snap or a missed block.”

Right now, the ULL signee is getting ready as he continues to recover and get back to his true kicking form.

“First when I go to ULL this summer, I need to work on getting back up to my old strength before I work on my craft,” Toms said. “I would like to work on my hang time most of all in my punts.”

Kevin Christopher Toms hopes that the coaches can find more ways that he can be used, but he realizes that having the role of punter is a title that is necessary in order to help the Ragin’ Cajuns win games.

The punter position might not be the flashiest position on the field, but Toms embraces the title and is looking forward to get back to 100% in order to help lead a dominant special teams unit for the ULL Ragin’ Cajuns.