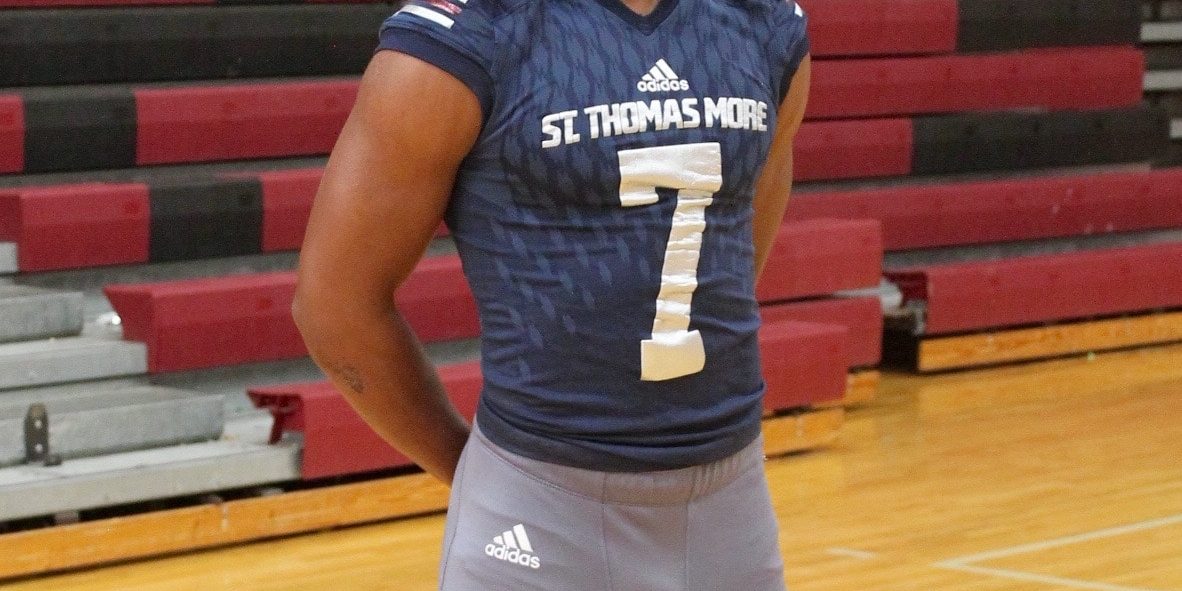 St. Thomas More High School is no stranger to having a surplus of elite talent to go along with its rich high school football tradition. Last season, the Cougars had a great staple of talent on both sides of the ball especially on the offensive end. However, one of the highlighted spots on defense came with the production of senior safety Jude Joseph. Joseph was one of coach Jim Hightower’s most coveted pieces in the secondary. The aggressive 5-11, 175 pound ball hawk was a valuable asset to what was one of the most respected defenses in the state.

Even with his success defensively, Joseph says he had the most fun playing wide receiver.

“It just felt good being on the offensive side of the ball and scoring touchdowns,” Joseph said.

The quality of competition for St. Thomas More was something Joseph enjoyed a lot throughout his high school career.

“I enjoyed playing Carencro, Plaquemine, and Catholic High [Baton Rouge], but by far our rivalry with the Rebels [Teurlings Catholic] was the best.”

The Cougars typically have a daunting schedule every year mostly due to their district, but also to the strength of the competition outside of Class 4A. With the heightened level of competition, there are plenty of games Joseph could point to being games he will remember forever. However, there was one that stood out amongst all of them.

“My most memorable game would be playing against Parkview Baptist in the state championship my junior year,” Joseph said.

St. Thomas More is a program that experiences tremendous success in making a run at a state championship every year. The Cougars played the Eagles in the Dome twice losing once and winning the other. The Cougars may have had their mix of ups and downs in the big game, but the experience of playing in the Superdome will live on with Joseph forever.  Joseph has enjoyed his time playing baseball for the Cougars. Last year, St. Thomas More advanced to the state semifinals before losing to the eventual state champions, Teurlings Catholic 7-1.  Joseph was also part of St. Thomas More’s state championship basketball team this past season. Once successfully qualifying for the state tournament, the Cougars made it to the finals and defeated University High School 65-55.  Even though he was finding success in all three sports, eventually, Joseph realized it would be best for him to commit to football.

“I believe it was a self-motivation thing to commit to football because I loved the sport so much,” Joseph said.

Joseph says he will try to play other sports in college instead of giving up everything for one sport. By doing this, he will stay in shape and maintain his conditioning.  After a lot of thought, Jude Joseph decided to further his education and attend the University of Louisiana-Lafayette. Despite offers from other schools such as Louisiana Tech, Colorado State, and Southern University, Joseph concluded ULL was the best fit for him.

“I chose ULL because of how close it is to home and I felt like that’s the school who wanted me the most during the end of my recruiting,” Joseph said.

Moving up to college athletics means high school athletes will have to adjust to new things such as a new environment, more demanding schedules, and new faces. However, early mornings will be the main area of adjusting for Joseph.

“I believe my biggest adjustment will be getting up earlier to workout,” Joseph said.

As he prepares to elevate his game to another level, Joseph plans to make a statement when he gets to campus. Specifically, he wants his work ethic to shine over all of his other attributes.

“I would want to be the hardest worker,” Joseph said. “I also want to be the best team player there is. I want to play as a true freshman and make an impact.”