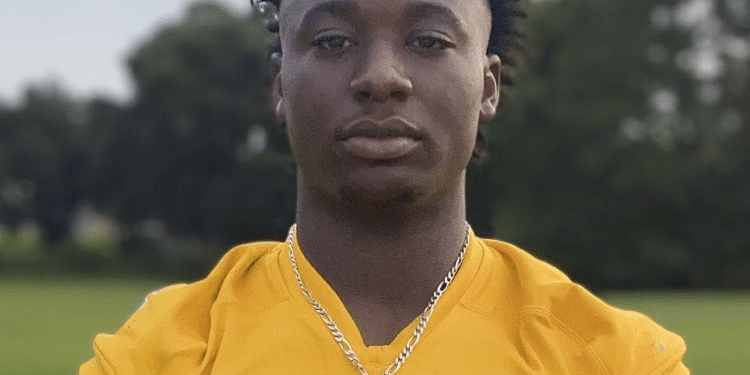 For all his life, U-High senior running back Derrick Graham has been called “Rodeo” and for good reason.

“I have been riding horses since I was about five years old,” Graham said. “When started playing football in 5th grade, my coach started calling me Rodeo because how I ran and threw the ball when I played QB and the nickname stuck. I compete in rodeos doing team roping. The trust factor is something that I brought with me to football. In team roping, you have to trust your horse so that he will put you in a good position to make a good throw. On the football field, you have to trust your offensive line to open holes and hold blocks. Luckily for me, I own two great horses, and I have been blessed to run behind a great offensive line this year.”

Now, entering his senior season, Graham has used his background being around horses to become a workhorse himself. The 6-0, 215 pound running back is another great running back in a long line of great running backs with players like Nick Brossette (LSU) and Michael Hollins (Virginia) in recent years. In fact, Graham is connected even more to these legendary runners as he is currently being coached by one of them.

“It truly means a lot,” Graham said. “I currently have the privilege of being coached by the U-High legend himself Coach Nick Brossette, which is an honor.”

Like his coach, Graham is a big, physical downhill runner that is not afraid of any contact.

“I would have to say my biggest strength is my mental toughness,” Graham said. “We play a lot of big, strong defenses. I have to run the ball with the same energy and effort in the fourth quarter as I do in the first quarter and my mental toughness allows me to do that.”

Like his predecessors before him, Graham not only wants to play at the collegiate level, but he also wants to end his high school career with a state championship ring just like the players before him.

“My goals for this season are to rush for 2,000 yards and win state,” Graham said.

The 2020 1st Team All-District and All-State Honorable Mention is on his way to accomplish those goals as the Cubs have started the 2021 season at 2-0 with dominating victories over Central and Woodlawn B.R.

“I am super excited about our start this year,” Graham said. “Getting off to a great start is always a good thing for our overall team’s confidence. Also, it allows the younger guys to get some playing time, which will add more depth and help us a lot down the stretch.”

While the Cubs are starting their run to a great season, Graham is also enjoying the recruiting process as well after receiving offers from Virginia, Houston, Louisiana Tech, Tulane, South Alabama, New Mexico, Southern, Marshall, Southeastern, Western Kentucky, McNeese State, Toledo, and Arkansas Pine-Bluff. Despite all the offers, the three star prospect has kept his recruitment open, and at the same time, has kept his eyes focused on the goals in front of him.

“I have been blessed to received 12 Division I offers,” Graham said. “I have a dozen or so more Division I schools who have strong interests in me. I look at the offensive schemes. I ultimately will commit to the schools with the scheme that fits me best and can get the most out of my abilities. That will be the school I choose. Right now, I am focusing on finishing my U-High career with a state championship. However, those visits are something that I do look forward to in the future for sure!”

Colleges are not just impressed with his ability to run the football, but also his other abilities as well.

“Listening to the college coaches who are recruiting and comparing me to the other top backs they have watched, they were surprised how well I ran routes and was able to get open in quality defensive backs and come down with the catch. That really impressed them,” Graham said. “All the top backs in Louisiana can run the ball well, but what separates me is my ability to be a strong down the field pass option and my ability to block in pass pro will show that I am a complete all-purpose every down back.”

In the meantime, Graham is continuing to better his game, and he does so by watching film on some of the best running backs in the NFL like Christian McCaffrey (Carolina Panthers) and Leonard Fournette (Tampa Bay Buccaneers).

“I need to improve on consistently using my stiff arm to ward off arm tackles in traffic and consistently use my elusiveness when I am in the open field,” Graham said.

Off the field, Derrick Graham has plans of what he wants to do after his playing days are over as he plans to major in Veterinary Science along with a minor in Kinesiology. Whether it is riding horses or carrying defenders, Derrick “Rodeo” Graham has his eyes set on the finish line.

Click the link below to check out Derrick “Rodeo” Graham’s junior highlights: