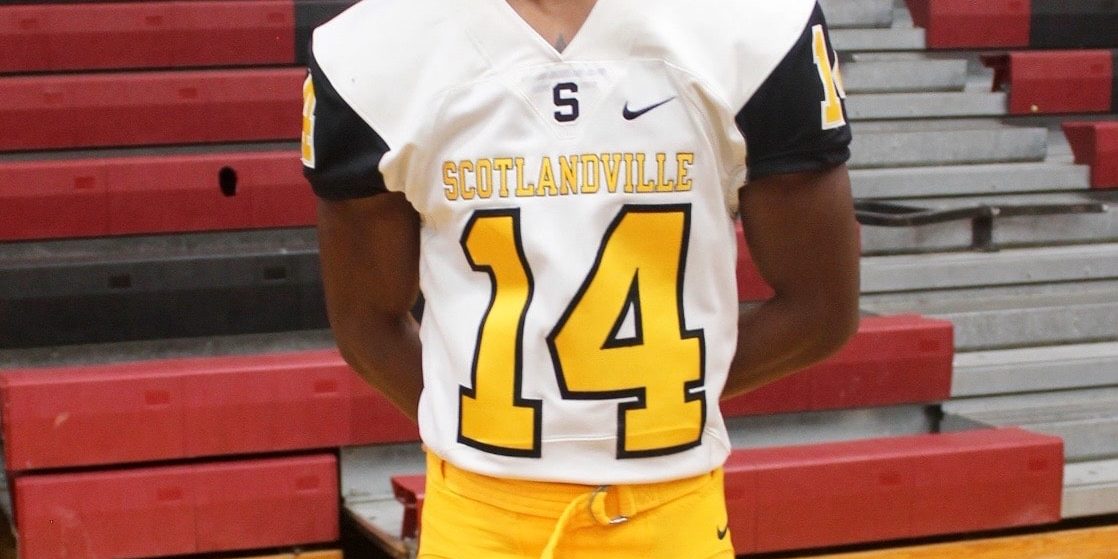 Everybody knows one half of the Scotlandville star safety tandem and that is LSU signee Kelvin Joseph, who is arguably the best player in the state for the 2018 class. However, not a lot of people realize that there is another DI caliber safety on the opposite side of Joseph and that player is Dorian Camel. Camel may not be ranked as high as Joseph when it comes to recruiting sites, but he is still one of the best in the entire state. He is the 13th best ranked player in Louisiana as well as the third best defensive back in the state by 247 Sports. Louisiana Football Magazine’s recruiting expert Lee Brecheen has also been very impressed with the Scotlandville defensive back even when all eyes were on his five star counterpart.

Not only is Camel born to play in the secondary, but the exceptional athlete was also born to use his electrifying speed. Camel is one of the best two sport athletes around in the Class of 2018. Not only he he been a two time All-District football player, but he has also been one of the best state track runners around. Twice over his high school career, he has been named a 4 by 2 state champion. He has respectively placed third in the state when it comes to the outdoor 400 meters and second in the state when it comes to the indoor 400 meters. There have been a lot of track runners that tried to use their speed and translate that speed to football, but they do it on either offense or special teams. That is not the case for Camel as he uses his speed to his advantage when playing on the defensive side of the football.

“My biggest strengths of my game is my speed,” Camel said. “However, using my speed has helped me with my physicality and tackling.”

Camel is the definition of a football player that just so happens to run track and not the other way around. However, Camel is looking to improve on one aspect of his game that can help him take his game to the next level while using his elite speed.

“One thing I can improve on is my ball skills,” Camel said. “I played more of a rover safety in high school where I could play a lot of man on the second receiver, roll over the top, and blitz off the edge.”

With Camel and Joseph being two of the best athletes on the field for the Scotlandville Hornets over the last couple of seasons, both had to play versatile roles on the defenses. With that in mind, both players knew they had to work with each other in order to improve their game and that is exactly when they did.

“We push each other mentally and physically at practice and during drills,” Camel said. “We will compete with each other some days, check with each other, and even after practice, we would be on the field getting extra work in.”

That extra work helped dividends in making this arguably the best two year run in Scotlandville football history. Over the last two years, the Hornets won, 22 total games, a district championship, and advanced as far as the Division I state championship game in the Superdome. For Camel, it was a great run and having a positive influence on the Hornet football team. Even though LaVanta Davis, who led the team to that dominant two year run, has resigned, he has no doubt that former LaGrange head football coach Jules Sullen can still maintain the high level of success for the Hornets.

“I noticed that us winning really affected the community in a positive way,” Camel said. “When I walk in a local store with my jersey on, they really show love by telling me that they will be there on Friday and rooting us on our season. I do believe we will see the Dome again next year because I believe the new head coach is going to push the program further in the future.”

Winning football games and playing for state championships has always been satisfying for the four star defensive back, but doing it with his teammates is something that Camel will miss the most during his time with Scotlandville.

“I am going to miss playing on Friday nights with guys like Jaylon Pitts and Juntrail Taylor as well as the rest of my brothers,” he said.

Thanks to Camel’s hitting ability and speed, he has received 13 DI scholarship offers most notably schools like Ole Miss, Mississippi State, Louisiana Tech, and Duke, but it was Tulane that was the right fit for Camel as he signed with the Green Wave in the early National Signing Day period.

“Tulane was a great fit,” Camel said. “The environment was great and at the same time, it is close to home so my family could see me play. I have great confidence that I will be able to showcase my skills as this is a place where I can see myself growing at. Plus, you cannot beat the degree for life after football.”

Thanks to guidance from his mother Robin, Coach LaVanta Davis, Coach Lamar Watson, family, and friends, Camel is determined to get a degree while he is at Tulane. Once his playing days are over, he is more than willing to give back to people that need it most

“After football, I plan on starting up businesses and starting up a charity that helps kids just not with sports, but with life,” Camel said. “Most kids are lost because they don’t have a structured home and no one to tell them right from wrong so I plan on helping kids become strong men.”

The 6-1, 170 Tulane signee has what it takes for one day take his talents to the NFL and at the same time, he still plans on running track for the Green Wave. For Tulane fans, this is a special two sport athlete that can help raise the bar for both Green Wave football and track.

“Tulane fans should be excited about me being on their team because I put my heart into the game and I am a leader,” Camel said.

Dorian Camel is another huge piece of Tulane’s best Louisiana signing class in years. With his versatility, speed, athletic ability, and leadership, the sky is the limit.