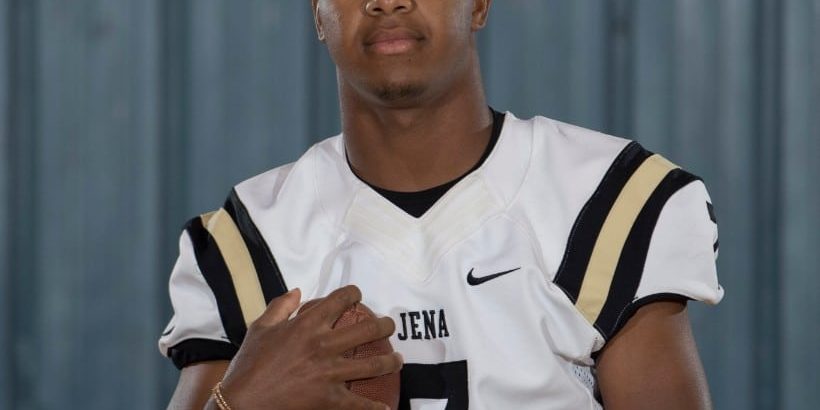 Almost, if not everybody, has heard about JaRay Jenkins from Jena High School. Jenkins is arguably the biggest football recruit that has ever come out of the school and has now signed with the LSU Tigers to play wide receiver. However, there is another great offensive player on Coach Jay Roark’s squad that is often overlooked, and that player is Jena senior QB Lamar Farris. Farris may not be as freakish as an athlete like his wide receiving counterpart, but he himself is a very athletic player that can make plays with his arm and with his feet. Heading into the season, the Lamar Farris-JaRay Jenkins connection was one of the state’s deadliest quarterback wide receiver duos. The two talented athletes have hooked up over 100 times for more than 2,000 yards and 30 touchdowns. In fact, Lamar Farris, who wore the #7 jersey, and JaRay Jenkins, who wore #11, got their nickname from a high school classmate who compared their connection to a convenience store.

“We got that nickname from a guy name John John Stephans in junior high because 7/11 always open, and it kinda stuck with us throughout high school,” Farris said. “It was like we knew what each other was thinking.”

After a 2015 season in which Farris led his team to a 9-3 record while throwing for 1,130 yards and 15 touchdowns, it seemed that the then junior quarterback was getting recognition, but due to the resurgence of JaRay Jenkins, the spotlight was taken off him. While the four star wide receiver was getting nationwide attention, Farris continued to do his part making plays with his feet and throwing the football to big #11. However, things took a turn for the worse at the beginning of the season when the LSU signee suffered a fractured tibia ending his senior season. The 7/11 combination that used to be always open came to a close.

“When he got hurt in Week One, I knew it was gonna be a tough year,” Farris said. “I knew that I had to step up even more not just on the field, but as a leader as well. He kept me up and motivated me that we could still do it.”

With the spotlight now off Jenkins, it now made its way to their veteran quarterback. Instead of avoiding that role, Farris took it head on and had himself arguably the best year of his career even without his best target in the lineup. The 6-2, 200 pound quarterback led the Giants to an undefeated 10-0 regular season as well as a district championship. Even through the struggles, the three year starting senior caller provided many of big plays to make it a very memorable senior season.

“The Caldwell Parish game my senior year will be the game that always sticks out to me,” Farris said. “We both were undefeated competing for the district championship. I through the game winning touchdown to Shaun Todd with less than 30 seconds on the clock.”

The team continued to battle throughout the entire season and excelled despite numerous of injuries, but in the end, it became too much of a toll as the Giants were upset in the first round by Westlake in the Class 3A playoffs.

“Honestly, on top of having three starters injured, we had several starters out all week with the flu and strep and had a bad week because of that,” he said. “Like eight guys on defense and five on offense were sick all week. I came down with flu the week before that and it just snowballed. It was a frustrating season with all of the injuries, but we still competed very well and won some big games.”

If the Giants could have stayed healthy all season long, it may be a different discussion as far as how the end of the season would have gone for this year’s squad. Through the ups and downs, Farris was there for it all and did whatever it took to help put his team in the best position as possible. The Jena senior quarterback may not get the credit he deserves as he might be the best quarterback to come out of the school. Farris set many records over his high school career including winning the most games in school history as a signal caller. The wins, undefeated seasons, and district championships made the experience all worthwhile. Now, with his high school career over, Farris wants to continue and improve in order to become the best player that he could be. The college that could help Lamar Farris accomplish his goals and translate those talents to the DI level is Trinity Valley Community College in Athens, Texas.

“They are well known to be a good school academically, and have one of the best offenses in the country over the last few years,” Farris said. “They do a good job of getting players to the next level.”

Louisiana Football Magazine’s recruiting expert Lee Brecheen also firmly believes that the Cardinals can mold Farris into the quarterback that he is capable of becoming.

“Lamar Farris has ability with 4.6/40 speed, but going to Trinity Valley College will allow him to become the complete package to work more on his passing skill set rather than his athletic skill set,” Brecheen said. “Farris has a ton of ability, but after watching him on film, he just needs to work on his feet a little more as well as his underneath throws in order to become a complete quarterback. He has the ability to become that and the opportunity to do so at Trinity Valley.”

Farris has already taken the right step in recognizing his own strengths and weaknesses before stepping on campus.

“I have always had good field awareness as well as an understanding of how the receivers run their routes,” Farris said. “I have also done a good job of protecting the football. I am very proud of my touchdown interception ratio during my high school years, but of course, the speed of the college game as well as learning a completely new offense will be new.”

His obvious goal is to one day transfer and play at a DI school, but now, he is making sure that he is continuing to improve on each facet of his game before taking that next step.

“Trinity will be getting a team player that loves the game, will compete every single day, and give 110%,” Farris said.

Farris has a lot of potential due to the fact that he is an athletic quarterback, but at the same time, he is very smart and knows the value of protecting the football. Also, he knows how to compete and win football games. Like in the beginning of his high school days, not a lot of people may know who Lamar Farris is, but by the time he is done, he will find a way for people to remember his name.