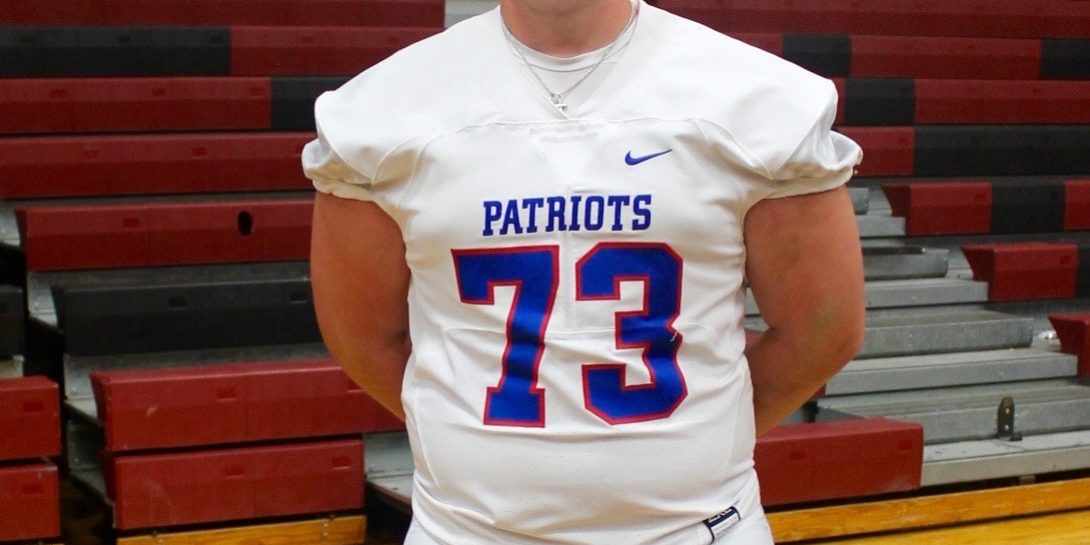 Heading into the season, John Curtis senior offensive lineman Cade Blalock just wanted to get his name out there as well as receive an offer to play at the next level.

“In the beginning of the season, I did not receive any offers,” Blalock said. “I wanted to go out and prove to scouts that were looking for a player like me that I could fit in their system.”

Blalock did just that as he received not just one, but plenty of other offers during the season. However, it came down to three schools that sparked the senior’s interest the most.

“Trinity, Seton Hill, and Saint Anslem College in Manchester, New Hampshire were the three schools that I was looking at the most,” Blalock said.

On national signing day, the John Curtis starter made his decision to choose the school that was the best fit for him, which was the Trinity University Tigers.

“Overall, Trinity University has a great program,” he said. “Coach Jerheme Urban has put together a great team. It sure is something special and I want to be a part of it. It also was closer to home and a way for my family to come and see me play.”

Being a part of great teams is something that is not new to Blalock, who has played for the legendary head coach J.T. Curtis and the John Curtis Patriots.

“Playing for John Curtis has definitely opened my eyes,” Blalock said. “Just the type of practice schedule we had a John Curtis showed that football is just a sport and in the end, we are trying to achieve one goal which is to reach Heaven. I am honored to play in Coach Curtis’ program.”

Not only has Coach Curtis led his team to 26 state championships, but he has inspired plenty of players not only in their athletic careers, but in their lives and Blalock is one of those players.

“Coach Curtis taught me to always work hard and to never give up on what you are looking forward to doing,” Blalock said. “In the end, it is a matter of how you work towards life and how you deal with it.”

“Our class sat down afterwards after the state championship loss to Catholic,” Blalock said. “We looked at it and we would not have traded anything in the world for the memories accumulated over the years, the friendships that we have gotten, and the bonds that we had. Obviously, winning that ring would have been nice, but in the end, it is nice to have those friendships that are going to last forever.”

A big reason for the Patriots’ continued success is what Head Coach J.T. Curtis made famous and that is the split back veer. In order to execute the option offense, there must be big athletic run blockers like Cade Blalock. At 6-3, 280, Blalock’s strength was his run blocking, but being able to be versatile and move to different positions has really helped him in getting looked at and recruited.

“Being from John Curtis and being in a run heavy offense, my main strength would be run blocking,” he said. “It is definitely something I pride myself in.”

For Blalock, adjusting to college football is one part, but transitioning from a heavy running attack in high school to a more balanced offensive attack at Trinity is another thing. However, the Trinity signee is ready for the change.

“I am looking forward to getting to Trinity and moving towards that passing game just a bit expanding my game even further,” Blalock said. “I have worked with the coaches and they have helped improve my pass blocking, but I still have a lot to learn and improve on. However, that is what the off season is for.”

As far as what Blalock wants to accomplish at the next level, his dream is to one day play in the NFL, but for now, he is focused on his schoolwork and helping the Tigers succeed.

“Playing in the NFL is every kid’s dream, but in the end, I just want to help Trinity any way I can and guide them to the playoffs,” Blalock said.

Cade Blalock has been part of a winning program like John Curtis and can bring his experience of playing in big games with him to San Antonio, Texas. He is a strong run blocker who could play at either guard or at tackle and is a student of the game. If Blalock continues to improve on his pass blocking skills, then the Tigers are getting themselves a good player that could immediately help with their program.