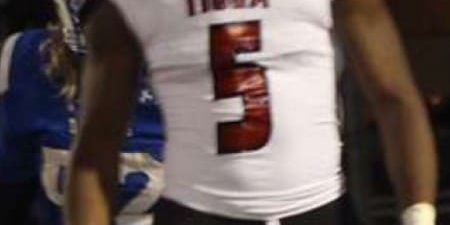 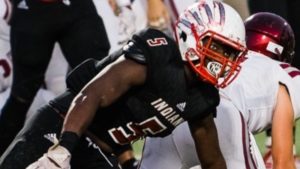 With the coronavirus pandemic preventing student athletes from participating in spring football, it can be easy for someone to take this time off. Well, that’s not the case for Tioga High School linebacker Jakobe Brock, who has been working hard to make sure that himself and his team are ready for the upcoming season.

“I’ve been working hard everyday towards getting better, and to my teammates, my message would be to hold yourself accountable to our goal,” Brock said.

Holding one accountable is something that Brock knows to do. Just ask his head coach Kevin Cook, who knows that he can trust his star defensive player.

“Jakobe is not only a special player, but a special person,” Cook said. “He is the nicest kid in school off the field, but on the field, he is not afraid to hit you. I know Northwestern State has offered Jakobe, but I expect a lot more by the end of the season.” 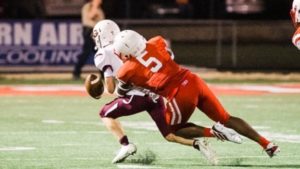 Hopefully, there is a season to be played. However, in case, there is not and Brock cannot show his talents in the summer in camps as well as in his senior season, Louisiana Football Magazine’s recruiting expert Lee Brecheen suggests that there is plenty of game film of the Tioga upcoming senior that bigger colleges should take a look at.

“Jakobe Brock has really improved from his sophomore season,” Brecheen said. “It shows what a kid can really do in six months if he works hard enough. Going into his senior season, he has really blossomed as a player. I believe he is a DI sleeper and he could be an incredible addition in the right system. He is a guy that colleges should watch going to games or watching full game film, and not based off camps.” 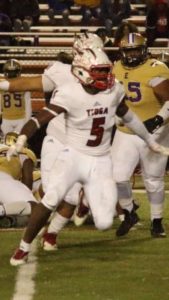 At 6-1, 230 pounds with 4.6/40 speed, Brock is an athletic specimen that could also bench 310 pounds, power clean 275 pounds, and squat 580 pounds. Not only is Brock impressive in the weight room, but the gridiron has also become natural to him as over the last two seasons, the All-District selection had an incredible 276 tackles, 8 sacks, 1 interception, two fumble recoveries, and three forced fumbles. All of this was piled up with still a year of eligibility left. Even though Brock took a huge step with an impressive 176 tackles in 2019, Tioga’s tackling machine thought that number should have been higher.

“My biggest goal was to get 200 tackles, and I was short of my goal,” Brock said.

Instead of being a vocal guy, Brock shows his leaderships by his actions on the field and listening to the people that matter most in his development as both a young man and player.

“Out linebacker coaches have been at the Division I level, and they help me to understand the speed, which I have to move,” Brock said.

Besides being a student in the classroom, Jakobe Brock is also a student on the field.

Watching great linebackers play as well as his ability to diagnose plays in order to get to the ballcarriers quickly have launched his improvement, but he is not satisfied until his team gets over the hump in order to get to the Super Dome. However, by doing that, the Indians may have to get through one of the best teams when it is all said and done.

“My favorite team to play is Warren Easton,” Brock said. “Even though we lost to them in the playoffs last season, they are a good team with Division I level players so the competition is through the roof.”

Last season, playing against Division I talent level competition not only helps prepare the Indians for this fall, but also helps Brock as he is waiting for more colleges to send him an offer. Besides receiving an offer from Northwestern State, only ULM and Louisiana Tech have really reached out to him. As far as Brock’s pitch to colleges is concerned, he wants to tell college recruiters that he can be a valuable asset to any team. Although a little biased as Brock is a starting linebacker himself, he feels that any defensive player should be first priority, and that even includes the NFL Draft.

“I would take Chase Young (Ohio State) with the first pick,” Brock said. “An offense can do anything they want to with enough time so there has to be some form of pressure.”

Guys like Jakobe Brock will make sure that no offenses have easy days.