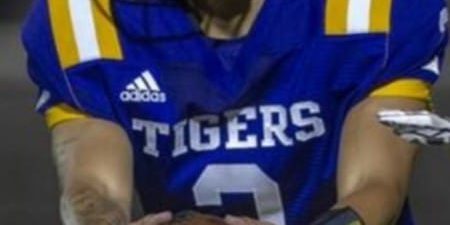 What do you do when an offense loses some of its top wide receivers including Kyren Lacy, who signed with the UL Ragin’ Cajuns, well, you then look at the offensive backfield to help carry the load. Fortunately for the Thibodaux Tigers, the unit not only returns its star running back Ferronte Miller, but also its signal caller as well. That signal caller is Luke Alleman. Heading into his senior season, the 6-1, 185 pound gunslinger has already had a long journey.

Two seasons ago, Alleman was going to take on his first season as a starter until a torn ACL injury took that opportunity away from him five games in. However, instead of moping about it, Alleman decided to immediately try and get back on the football field. Because of that, the process of trying to get back healthy was a lot quicker for Alleman.

“The process lasted from October when the injury occurred to about early August,” Alleman said. “After physical therapy ended, they sent me to Jerry Blackwell, who is our athletic trainer at Thibodaux High School, and we worked out just me and him in order to work on my conditioning and get my leg back at 100%. After he released me to Coach Chris Dugas, I was able to work out and do all of the normal drills with the rest of the team. To be honest, I was just focused on getting healthy and in shape because the football season can take a physical toll on you.”

Usually, when a quarterback is recovering from a knee injury like a torn ACL, it may take a while for that player to feel comfortable scrambling out of the pocket, but that is not the case for Alleman according to his head coach.

“Luke is a very cerebral quarterback,” Coach Dugas said. “He is a good athlete that is very tough and also very competitive. Sometimes, he maybe runs a little more than what we want him to, especially coming off a knee injury, but he is not afraid to fight for extra yards.”

After coming off an injury in which he missed majority of his sophomore season, Alleman wanted to prove himself as well as the rest of the team that he was definitely the right man to handle the snaps. He did so by displaying the toughness that Coach Dugas talked about.

“I feel like I am one of the toughest quarterbacks in the state,” Alleman said. “I can stand tough in the pocket and take a hit. Also, when I run, I am not looking to slide, but I am looking to either run somebody over or juke somebody in order to gain extra yards.”

As unorthodox as it may sound for a quarterback to try and run a linebacker or a strong safety over, Alleman’s playing style is just as effective. In his first full season as the Thibodaux starting quarterback, he led the Tigers to seven wins while throwing for 3,000 yards and 30 touchdown passes. Not only Alleman picked up awards such as being recognized as 1st Team All-District, All-Region, and All-State honorable mention, but the dual threat has also started to see some college attention heading his way at the conclusion of last season.

“Louisiana College actually offered me this morning, and I am currently getting recruited by Southeastern, McNeese State, Nicholls State, Louisiana Tech, UL, and others,” Alleman said.

Despite all of the success, Alleman also quickly acknowledged having some of the best skill players around him in the state last season in order to help him with his development.

“It definitely helps when you have a guy like Kyren Lacy that you can throw jump balls to as well and also, Darwin Davis, which you can throw crossing routes to,” Alleman said. “When all else fails, I could hand the ball off to guys like Ferronte, who also have a chance to score every time he touches the football.”

Now, entering his senior season, a lot more eyes are on Alleman along with his fellow running back Ferronte Miller after the offense has to replace its main receiving targets from last season. Also, to make matters worse, the coronavirus pandemic has prevented all Louisiana high schools to not participate in spring sporting activities. Still, the former baseball pitcher has faced bigger obstacles in the past and is not afraid of conquering them.

“My dad and I are always working together at 5:00 in the afternoon trying to get that work in,” Alleman said. “Putting in that work everyday helps you develop that mindset that I could outwork anybody that you put against me and that I can beat any coverage that you throw against me.”

Luke Alleman may have the athleticism, the arm, and a lot of physical attributes that will help him carry on to play at the next level, but at the end of the day, it is his confidence, winning mindset, and toughness that will give the Tigers a fighting chance in every ball game this season.