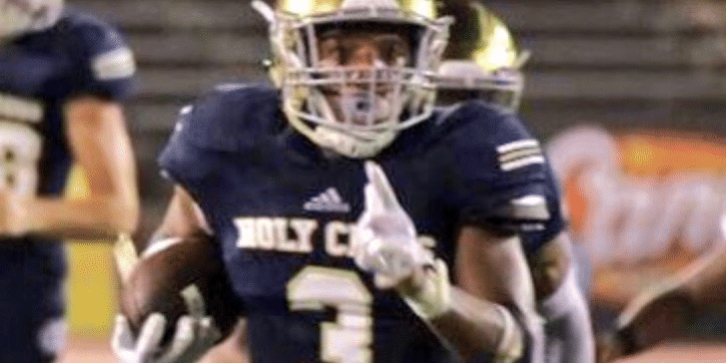 The Tulane Green Wave’s loaded backfield is going to get another very talented addition to their running back core in Holy Cross High School senior running back Jaden Handy. The three star running back has other offers from Nevada, Nicholls State, McNeese State, and UTSA, but it was nearby Tulane that stood out to him the most.

“The coaches and staff over there showed me tremendous love and they preached how everything is a family over there and that’s what I like to hear,” Handy said. “It showed when they played against South Alabama and how they came together came together at the end and pulled off that victory.”

A key part to Tulane’s comeback victory is the play of its loaded backfield. Usually, a running back would be discouraged by going into a situation where their position group is loaded with depth, but not Handy.

“Well, they have Tyjae Spears, Amare Jones, and Stephon Huderson,” Handy said. “All those guys have an unique skill set and can do amazing things in the backfield. I can’t wait to be apart of that.”

Another reason why Handy is excited about the future at Tulane is the relationship he has built with the other commits in his class.

“We 2021 Tulane commits already support each other and make sure each other better ourselves everyday in group chat that we are in,” Handy said. “Everybody has great relationships with everyone.”

In speaking of relationships, Handy has solid relationships with the rest of an experienced and talented Holy Cross football team that has a lot of high expectations in 2020.

“My goal is to win a state championship,” Handy said. “Stats wise, I just want to help my team win. Whatever my stats end up being is what it is. I’m more focused on winning than anything.”

“Everyday, I go against those guys, and it’s competitive,” Handy said. “Every single time we make each other better every day. Barryn Sorrell (Northwestern defensive end commit) is everywhere on the defensive line. I know for a fact that not a. lot of defensive linemen can run down the field 20 yards and make the tackle, but he can do that. Kolbe Cage (Arizona outside linebacker/safety commit) is the hardest safety in the state to block, and I have to block him everyday. I won’t see many like him.”

It is great to have talent on a football team, but there is talent everywhere when playing in the Catholic league.

“I think that the Catholic league is the best competition you will get when it comes to high school football in Louisiana,” Handy said. “It’s just different.”

What makes Holy Cross different this years specifically is the addition of its new head coach Nick Saltaformaggio, who has always led state championship caliber programs whether it has been at East Jefferson High School or Hahnville High School.

“Coach Salt is a great head coach,” Handy said. “He brings everything you need to the table. He brings excitement out there, and he is also a very funny guy. We have installed everything whether it has been the plays or special teams, but as far as morals go, he has installed that everyone on the team is equal. He showed us that we have to be a family.”

The Tulane commit has a lot to offer for his current family and his future family with what he is capable of doing on the football field.

At 5-10, 200 pounds, all of those characteristics are similar to a current NFL rookie that is coming off a National Championship and is playing for the defending Super Bowl champions.

“Well, I try to play like Clyde Edwards-Helaire (Catholic High School/LSU/Kansas City Chiefs),” Handy said. “He runs routes out of the backfield and is just as good when he runs the football.”

Like Edwards-Helaire, Handy is not focused on his individual statistics, but what he could do individually in order to help his team.

Planning on getting his MBA once he gets to Tulane, the humble running back does not like to toot his own horn that often, but he wants to make sure that his local Green Wave fans have themselves another talented running back they can be excited for.

“An interesting fact about myself that not a lot of people know about me off the field is that I’m a very genuine person,” Handy said. “I’m a very real person. You won’t find many real people now a days, but also, I’m a competitor at all times. It can be anything. I just love to compete.”

It is a rare gem to find players that are more concerned about winning than their individual success. There is the old saying that modesty is the best policy and for such a glorified position like at running back, it is special to have somebody like Jaden Handy that will do whatever it takes to win. Those players definitely do come in “handy”.

Click the link below to check out Jaden Handy’s junior highlights: