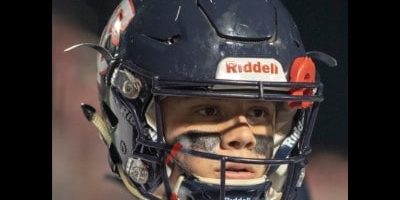 Teurlings Catholic is a school in Lafayette, Louisiana.  It is a Roman Catholic school that is home to the Rebels Athletics.  The football team is currently underway with their 2019-2020 schedule.  The team has started off 2-0 and is currently on a great run at a championship.

The Rebels took on a tough Comeaux team in Week 1 and came out with a victory of 35-20. Week 2 was against Archbishop Hannan and the same result occurred with the Rebels coming out with a 49-8 victory.  Week 3 will be a test against Opelousas, and we will see if the Rebels can make it a 3-0 start to the season.

The Rebels are a squad that is led on offense by their senior quarterback Sammy Leblanc.  Last season, he passed for 1,816 yards and threw 13 touchdowns. He was 142/280 on his passes, but he is looking to up those totals this season.

“I feel like we have the weapons surrounding us to be really good this year,” Leblanc said. “We have guys that make plays down the field and catch everything.”

“We played a good Comeaux team and was a great win to start the season off,” Charpentier said. “Comeaux is going to win a lot of games this season and that is good for us.  We are looking forward to a great season.”