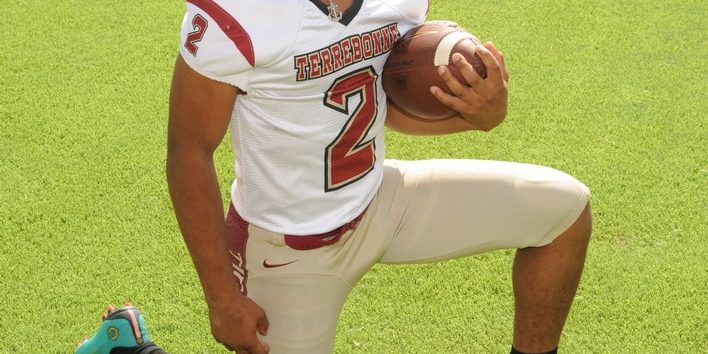 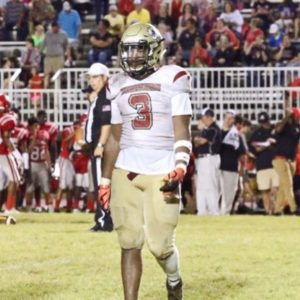 The Terrebonne High School Tigers are having themselves an incredible season as the team has yet to have a loss on their record at 7-0. The team is also on pace for a district championship and is sitting at number six in the Class 5A power rankings. Based off their resume, it would seem that everybody would be talking about the Tigers as legitimate state championship contenders. Still, the Tigers feel that they are still not respected as compared to other Class 5A teams across the state of Louisiana. Case in point, senior linebacker Cullen Butler, who is one of the leaders of the Tigers’ football team, embraces the underdog mentality.

“The media gave us a lot of attention at the beginning of the season with the Jakhi Douglas offers, but Terrebonne has always been the underdogs,” Butler said. “We have worked hard in the summer, and now, it is paying off. People are beginning to open their eyes ever since the Hahnville game and as we go along to play some of the bigger teams.”

In case if you have not heard about the sensational junior Jakhi Douglas, he is an explosive athlete at 5-9, 184 pounds with 4.4/40 speed. Douglas has already received offers from big time schools such as Alabama, LSU, Florida, Mississippi State, Tennessee, TCU, Missouri as well as plenty of other DI programs. Even though Douglas is the headliner, the Tigers’ backfield does not just consist of the four star playmaker in the 2020 class. Seniors Chaz Ward (5-11, 213) and Keshawn James (5-8, 170) have proved to be all time program greats during their careers. The facts back it up as Chaz Ward has ran for over 1,647 yards and over 20 touchdowns the last two seasons while James had an All-District season in 2017 with over 1,500 all-purpose yards to go along with 18 total touchdowns. What makes this offensive triple threat backfield so unique is that each player can play quarterback and line up at different positions. Louisiana Football Magazine’s recruiting expert Lee Brecheen believes that this trio is the best Terrebonne has had in the history of the football program.

“Keshawn James is a guy that a Nicholls State can get in their own backyard,” Brecheen said. “He is amazing in the open field with the ball in his hands. Chaz Ward can be a DI fullback or I-AA running back. He is a powerful runner. Between James, Ward, and the junior Douglas, this is the best running back tandem ever at the school. This may also be the best team to come out of Terrebonne since the 1970’s or 80’s. It is a very good team.”

Don’t just take Brecheen’s word for it. Terrebonne Head Coach Gary Hill, who has been in charge of the program over the last 12 years, says that these three are some of the best players he has ever coached.

“This is the most talented backfield that I have coached,” Hill said. “They can all play different positons and can all line up at quarterback, which keeps the defense honest. Chaz is more of the power runner while Keshawn and Jakhi are more of the outside runners that can explode for big plays. They all complement each other really well.”

Butler sees how tough it can be to contain all three players each day in practice.

“They just bring out the best in me to compete,” Butler said. “They all bring passion to the game and bring something to the table. Chaz has the power. Keshawn is a great athlete, and Jakhi’s play just speaks for itself.”

Ward would never though that the trio would go on to have the type of year they are all having together in 2018.

“I am very honored to be mentioned in something that big,” Ward said. “The thing that makes us so unique is that we have so much trust in one another and we can count on each other to make a play. The speed and physicality of those two guys can wear a team down all night and then there is a big, explosive running back in myself that you have to deal with for four quarters. In my opinion, I think it’s very difficult.”

It sure has been difficult for other teams to defend and the win loss record can sure back up that claim for the Tigers, but it is not just the backfield that has been producing for the Tigers. Football is a team game, and Coach Hill has been impressed with the play of the entire team.

As a senior leader on this football team, Butler preaches to his teammates of what the entire team is capable of doing.

“The only thing I tell them is to take one game at a time and just stay discipline,” Butler said. “That is pretty much it.”

Butler has deserved the right to be one of the voices in the locker room after earning All-District and All-State honors over the last two years. At 6-0, 180 pounds, Butler may not be your conventional linebacker, but that still does not prevent him from having that mindset of showing no mercy on the ball carrier. The biggest obstacle for Butler is that he is most likely going to be a safety at the next level. That would mean adjusting from linebacker drills to defensive back drills, but once he goes to a campus, he will be ready for the opportunity.  For the Tigers to accomplish all of their goals, the team has three very important games that could determine who wins the district championship as well as a really high playoff seeding in the Class 5A playoffs. In the last two weeks of the season, the Tigers face the H.L. Bourgeois High School Braves and the Destrehan High School Wildcats. Some teams may be looking forward to the next couple of weeks especially the Destrehan game at the end of the regular season, but the Terrebonne Tigers are focused on tomorrow’s tough task, which would be the district rival Central Lafourche High School Trojans, who are riding high with a 5-2 record.

“We have to stay focused as a team and play Tiger football,” Ward said. “We can’t let the 7-0 hype get to our head. Football is football and talent is talent, but the mindset of our team makes all the difference. Tomorrow, we have to go out there and prove it to them. We work harder and want it more. In order to do that, we have to dominate them in every way, shape, and form for 48 minutes.”

The Terrebonne Tigers have done that over a whole course of a season outscoring opponents an outstanding 283 points to 70 points over their first seven games. With a talented backfield, an aggressive defense, and at the same time, having that humble, underdog mindset, there is no question that the Tigers can be one of the potential teams to make a lot of noise not only in November, but early December as well.