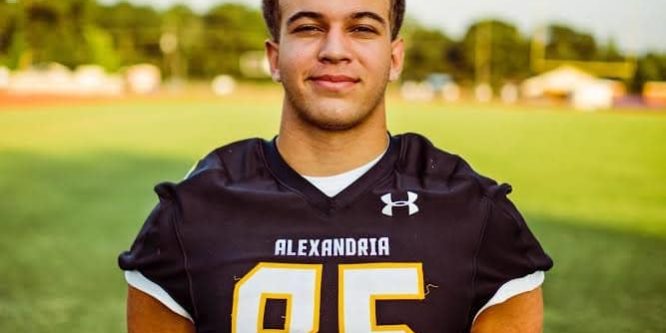 The Stanford Cardinal is known among the nation at Tight End U. Whether it has been Zach Ertz (Philadelphia Eagles), Coby Fleener (Indianapolis Colts/New Orleans Saints), or Austin Hooper (Atlanta Falcons/Cleveland Browns), there has been no Power Five Conference football program more productive or consistent at the position than the Stanford Cardinal. Because of that reason, it would make sense for them to go after one of the top tight ends in the country in Alexandria High School’s very own Shield Taylor. At 6-4, 235 pounds, Taylor has a lot to offer at the position.

“I think my biggest strengths as a tight end is my versatility,” Taylor said. “My favorite part about the position is that I get to do a little bit of everything especially in the modern version of today’s tight ends. There is very little that I don’t like to do.”

Although Taylor makes his living for the Trojans as a tight end and Stanford is known for the tight end position, the Cardinal coaching staff is looking to place Taylor elsewhere because of his versatility.

“When we first talked, they immediately compared my game play to Ryan Hewitt’s (Cincinnati Bengals),” Taylor said. “On the roster, I’ll be a fullback, but they want to use me as a hybrid of everything. I think that versatility is what really sold me.”

Stanford was not going to require the talents of Taylor at a cheap price as the Pac-12 football program had to fight 20 other college football programs for his services. On July 24th, Taylor made his decision to commit to the Cardinal over programs like Duke, UCLA, Virginia, and Washington.

“Stanford was just the place for me,” Taylor said. “It’s an opportunity for a great education and some big time football with elite coaching. They recruited my family as well as me, and we’re not afraid to ask the more important questions such as what my goals are and how have I been a positive influence to those around me. Their dream and goal for me aligned greatly with the ones I had for myself. My family and I developed a great relationship with the coaching staff, and it was the best fit for all of us. There simply isn’t enough I can say about the Stanford Cardinal.”

Although the decision may seem to be a tough one, it turned out to be a no brainer for the three star tight end prospect.

“As soon as I knew that Stanford was the place for me, I didn’t want to wait anymore,” Taylor said. “I wanted that pressure off my shoulders before the season and knew the time was right.”

The Stanford recruiting staff made the pressure much easier on him to commit at the right time before the start of his senior season.

“Coach Gould definitely had the biggest impact on me,” Taylor said. “He is a man I’d like to be more like one day, but he is very passionate about the game. He is very mild mannered off the field, but flips a switch at practice and at game time. I feel that we are a lot alike in that aspect, and I think we will be very compatible. Coach Shaw’s coaching experience and coaching style was also very intriguing to me.”

Our Louisiana Football Magazine expert Lee Brecheen believes that the Cardinal is getting a gem as he put Taylor on the front cover of the North Louisiana edition at the beginning of the season.

“It’s an honor,” Taylor said. “It’s very humbling and makes me want to play even harder. I couldn’t be here without all the people backing me in my corner and the ones that believed in me.”

In fact, it was the people that believed in him the most that has helped him evolve as a DI football prospect, especially since he is the baby in the family.

“I’m the youngest of four children and I owe it all to my mom and three siblings,” Taylor said. “They raised me, and I wouldn’t be here today if it wasn’t for them. Those are the four people that I’d like to make proud one day.”

Hopefully, for Taylor, his family could be proud of him his senior season as he would like show why he is highly regarded by so many DI football programs.

“I’ve always wanted to be the guy that defenses will have to plan against and will always be a little afraid of,” Taylor said. “This year, I will be able to do that, and it is without a doubt one of my goals. I definitely want to have more receiving yards this year and excited for that. As a team, I know we all want to go win a ring.”

The Alexandria Trojans had a lot of talent in 2019 and won ten games overall, but an early playoff exit still lingers in Taylor’s thoughts.

“We had a great run last season,” Taylor said. “We had a phenomenal team with an enormous amount of talent. We were very strong in our run game and had one of the best defenses in the state. Our season ended after the second round last year. Our lack of discipline and leadership really showed up at that game, and we let it get the best of us. We’ve already began to fix these problems, and I guarantee it won’t happen again.”

The Alexandria tight end is making sure it won’t happen again by improving on his weaknesses for the upcoming season.

“I think I can improve on my lateral mobility and fast twitch muscles the most,” Taylor said. “This will add more to my game and increase my speed, which will have endless opportunities.”

Also being a multi sport athlete, he is taking some of the various things he has learned in order to expand on his versatility as a football player.

“I’ve learned discipline and dedication from all the sports I’ve played, and it has payed off,” Taylor said. “Each sport has contributed to different aspects of my game, but I think the one I benefit from the most is definitely track. Practicing with those sprinters is a different kind of tough.”

What also helps is holding your own against DI athletes in practice on the defensive side of the football. Last season, Taylor had to go up against players like Jacobian Guillory (LSU) and Bud Clark (TCU).

“Those two dudes are phenomenal athletes,” Taylor said. “They always held everyone to a high standard and competed their tails off every practice. It was tough at times, but I and my teammates are definitely better having competed with them.”

Working out as well as being together during the pandemic gives Taylor and his Alexandria teammates plenty of optimism for the fans heading into 2020.

“The fans should be even more hyped than last year,” Taylor said. “Our offense will thrive, and our defense will be an unstoppable force regardless of how many starters we’ve lost. They are in for an outstanding season and we will be striving to hear them cheer.”

As impressive as his versatility on the field, it is more impressive what he can do in the classroom posting a 4.35 GPA.

“My advice is to be nice to your teachers and appreciate what they do,” Taylor said. “Take advantage of those resources and be eager to learn. They want you to succeed just as much as you do.”

Excelling on and off the field will allow Taylor to achieve his dreams of playing DI college football as well as give him the opportunity to fulfill his goals at the highest level.

“My goals for when I get to Stanford is to shock the nation one stadium at a time,” Taylor said. “I want to leave a legacy in football, but also as the young man that I will be. I think that Cardinal fans will love the way I play the game and what I’ll be able to contribute to the team.”

With everything that he has accomplished, it is safe to say that Shield Taylor has not only impressed his own family, but the Stanford Cardinal family as well.

Click the link below to check out Shield Taylor’s junior highlights: