The St. Martinville Tigers Have One Of Their Best Seasons Yet Thanks To An Underappreciated Senior Class 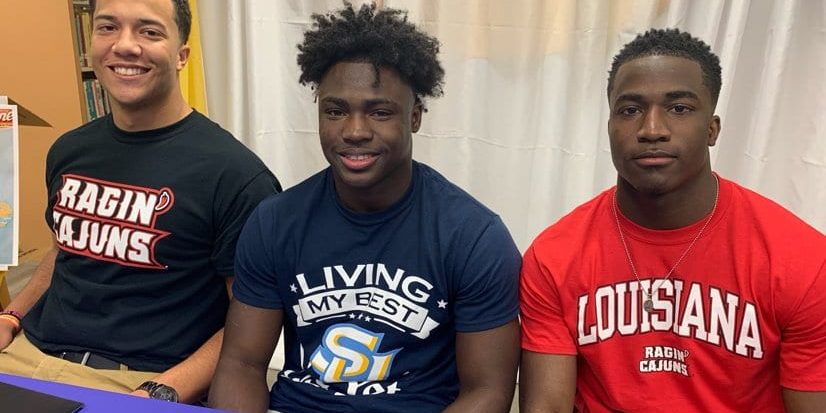 The St. Martinville Tigers Have One Of Their Best Seasons Yet Thanks To An Underappreciated Senior Class

The St. Martinville Tigers are coming off one of their best years in program history. In fact, it is has been the best season in quite some time. In 2018, the Tigers finished with a 12-1 record overall, but achieved their first undefeated regular season since 1996 as well as their first outright district championship since 2000. The Tigers also went to the Class 4A quarterfinals since 2005. These are all even more impressive accomplishments after just looking at the last couple of years.

“This past year was one for the books,” senior Markavon Williams said. “I was blessed to accomplish all of this for my last year of high school.”

The Tigers did make the next step this season after posting three straight 6-5 seasons as well as an 1-9 season the year prior. Even though this year has been one of the best ever for the program, a lot of the seniors though that this year could have been even better.

“We had enough talent to win it all,” senior Marcus Cormier said. “We fell short, but I still loved every moment of the time I spent with them.”

As head scratching as it may seem, a lot of players were disappointed with the finish, but based on the amount of talent the team had, they felt like last season could have been the year. Louisiana Football Magazine’s recruiting specialist Lee Brecheen knew that the Tigers had a special season not only because of the team’s experience, but because of the amount of talent the team had. In total, there were three seniors that went on to sign with in state colleges. Those three seniors are Cormier, Williams, and Travien Benjamin. The big three were catalysts in order to make the 2018 season as special as it was.

All senior DE Marcus Cormier did was disrupt offenses during his time with the Tigers. At 6-1, 230 pounds, the senior made 1st Team All-District, 1st Team All-Acadiana, and 2nd Team All-State. Over his prep career, he accounted for 160 tackles, 25 sacks, 10 pass deflections, forced six fumbles, and even had a couple of receptions as a tight end here and there. His explosion and ability to get off the snap attracted the attention from ULL and Louisiana College as well as gained the interest of ULM, Northwestern State, Nicholls State, McNeese State, Tulsa, Grambling, and Southeastern. In the end, Cormier decided to sign with the Ragin’ Cajuns as a preferred walk-on.

“I felt that it was home,” Cormier said. “Mr. Tim Leger has been recruiting me since my sophomore year and when I went on a visit, it just felt like it was the best place to take my talents.”

According to Brecheen, that is what Cormier brings to the table as a preferred walk-on.

“Marcus Cormier is a good player,” Brecheen said. “At around 6-0, 225 pounds with 4.8/40 speed, he can probably move to middle linebacker. He is the definition of a good football player, and is a tough kid.”

Cormier is not the only player that has accepted a preferred walk-on with the Ragin’ Cajuns. Markavon Williams, who has played under center as the starting quarterback for the Tigers, has also signed as a preferred walk-on with ULL. Like his teammate, he also drew some interests from colleges such as Louisiana College, Alcorn State, Nicholls State, McNeese State, Southeastern, and Grambling. Williams may only be 5-9, 178 pounds, but he is a dynamic player that did it all during his playing days with the Tigers. He threw for over 1,000 yards and ran for 1,000 yards while accounting for 32 total touchdowns last season. The three time All-District, All-Acadiana, and 2nd Team All-State selection is a versatile player that can play multiple positions thanks to his ability to move in open space.

“I chose ULL because I wanted to be a part of the culture they are building over there,” Williams said. “I also would love to play college football in front of friends and family.”

Williams will get the opportunity to do so. Brecheen says that his athleticism could make a huge difference.

“Markavon Williams is a great athlete,” Brecheen said. “He is not super huge, but I think he could be a really good wide receiver/defensive back in college.”

The last player to sign is arguably the best one in senior RB Travien Benjamin. Quietly, Benjamin was becoming one of the best running backs in the state. Even though his numbers yell the fact that Benjamin is a big time running back with close to 4,000 yards rushing and 55 touchdowns in the last two years combined, there still has not been a lot of offers heading towards Benjamin’s way. Fortunately, the Southern Jaguars saw something special in the two time All-State running back by offering him a scholarship. From there, it was all history as Benjamin signed a full scholarship to Southern University on National Signing Day even though other schools pushed in the end such as Houston, Navy, Nicholls State, Tulsa, and Tulane.

“It was the culture that took me by surprise,” Benjamin said. “Southern really prioritizes education first.”

Brecheen not only believes that this pickup is a major steal for the Jaguars, but he also believes that Benjamin could make some noise not only in the SWAC, but even beyond.

“Too many people put too much stock in who is recruiting the kid,” Brecheen said. “I watched Travien this year play four full games, and he is as good as any running back in the state including John Emery (Destrehan/LSU signee) and Tyrion Davis (Southern Lab/LSU signee). Travien is a tenacious runner at 5-11, 210 pounds, but he is also fast, has great vision and burst. I think he is phenomenal, and I also think that Southern has hit a home run getting him. His stats are off the charts too. He was definitely a guy that helped stir the pot in order to help get the Tigers where they went last year. I think he will be a guy that you hear about one day in the NFL and wonder why none of the big schools went out to recruit him. That is a great signee for Southern and Coach Dawson Odums. He can be a day one starter for them next season. He is not just DI, but he is a SEC back that gets better the more he touches the football.”

Those three players may be the big names, but there are some other players that also have the potential to sign as well according to Brecheen.

“Jomel Fontenette is another good player,” Brecheen said. “He played to the best of his ability as he can run a 4.6/40. He is a great player that can play for a lot of I-AA schools.”

“Markel Chambers may be an undersized linebacker at only 5-11, 220 pounds, but he will knock you in the mouth,” Brecheen said. “He is tough, and it would not surprise me if he ends up either in the Southland Conference or in the SWAC.”

“Kyron Comeaux is a big receiver at 6-3, 170 pounds,” Brecheen said. “He did not get the ball a lot because of the many carrries Benjamin got, but he has a lot of ability.”

“Toddrick Toussaint is big time,” Brecheen said. “Again, he is another guy who is very underappreciated. It is a shame that the star system misses a lot of guys like him and Benjamin, but Toussaint will bring the wood at 6-1, 185.

“Javone Wiltz is another I-AA no brainer,” Brecheen said. “He is another guy that can bring the wood.”

Brecheen goes on to say that linemen Damon DeRouen and Justin Bourque could also find their way to a collegiate roster. There is no question that next year may be a tough year trying to replace a special senior class for Coach Vincent DeRouen, but hopefully, the underclassmen can follow in what the upper classmen did this year and continue developing the culture.