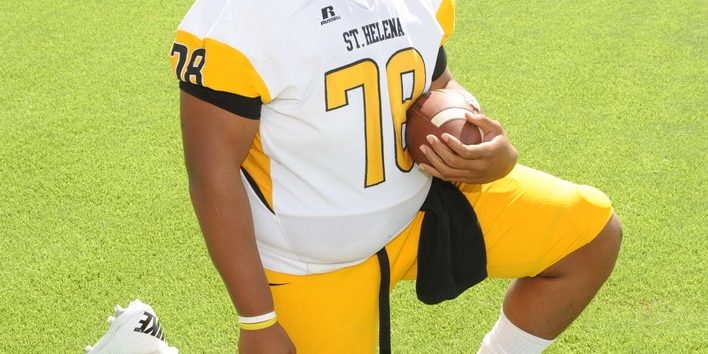 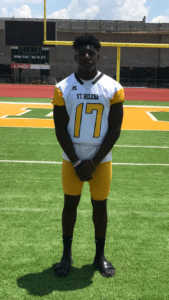 Former St. Helena College and Career Academy Head Coach Brandon Brown did an excellent job of building the program from his first season winning only two games to his final season in 2017 in which the team made it all the way to Superdome playing for the Class 2A state championship. Even though the Hawks fell short against the Welsh Greyhounds, the future was exceptionally bright. However, entering the 2018 season, this would be a year to test where the Hawks were as a program as they lose key players that helped build the program including QB Ricky Travis (Grambling) and WR Troy Hurst (Memphis). The biggest departure was the guy who started it all and that was Brown, who was named head coach of the East St. John Wildcats. The man to take his place would be Northeast High School defensive coordinator Johnny Felder. Felder knew that it was going to be a tough job to take over, but he knew that with a good senior laden athletic group with plenty of big linemen will make the transition easier.

The lineman that stands out to mind is senior offensive tackle/defensive tackle O’Cyrus Torrence. Torrence has always stood out because of his size at 6-4, 325 pounds. The two time 1st Team All-District selection has also stood out for DI football programs such as Georgia, Louisiana Tech, ULM, South Alabama, Middle Tennessee, and ULL. In the end, it was the Ragin’ Cajuns that was the best decision for Torrence as he signed with the university in the first national signing day period. For Coach Felder, seeing a guy that has been through the program have a chance to play football at the next level is encouraging to see.

“I think it capped off a great career for a deserving kid,” Felder said. “He wanted to stay on the offensive side of the football and play on the offensive line. I think the love and the consistency that ULL has showed him throughout the recruiting process had an impact on him so I think he is going to fit in well there. ULL likes to pound the ball and establish the run a little bit. I also think it will be a small enough place for him coming from a small country school. I am very excited for him.”

Louisiana Football Magazine’s recruit expert Lee Brecheen believes that the Ragin’ Cajuns have themselves a huge steal in the big lineman.

“O’Cyrus lost a lot of weight from last season, and he is probably still around 340 in weight,” Brecheen said. “He is a SEC lineman that could help at a LSU, and I think that ULL will love him. I think they got themselves a big steal signing this kid. I think he is better than a lot of linemen that signed in state with LSU over the last three years.”

Hopefully, with guys such as Hurst, Travis, and Torrence signing, it will open doors for more Hawks to sign including more that might sign in the late signing period. Brecheen said there could be more players that have the potential of finding a place to take their talents to.

“Another guy that I think is really good is their defensive end Alex Self,” Brecheen said. “He could play at the I-AA level. I hope that Southern would offer him or a Southeastern if they are not filled up with scholarships or even a Grambling, Nicholls State, or McNeese State. He is 6-1, 245 and can move.”

“Another nose guard is Dreveion Hitchen,” Brecheen said. “He is another big guy at 6-3, 360 pounds. He is another diamond in the rough that can be a nose guard at the I-AA level, but could also play at the Sun Belt or in the SWAC conference. He moves well for 360 pounds, but probably needs to move down to about 330.”

“Keiven Muse has been their rock for the whole defensive line,” Brecheen said. “He is not tall, but he and his brother Brant Muse, who are both around 5-10, 270, are both qualified to play and have great feet. I think they are both D-III superstars.”

“Then, there is Myron Smith, who can play wide receiver or free safety,” Brecheen said. “He is qualified as well at 6-1, 185 pounds. I think he is a I-AA steal.”

“At the DI level, I think Michael Martin is really under the radar and he is qualified,” Brecheen said. “At 6-2, 185, he has great hands and he actually had a big state championship game a season ago.”

Coach Felder believes that all six players have what it takes to play collegiate football.

“We may have a couple of guys that sign maybe Brant or Alex,” Felder said. “We are hoping that they are deciding to go over this and opening it up. They are still trying to contact schools. I think Alex Self can play at the next level at defensive end. Brant played some defensive end for us. He may be a little undersized, but he has great work ethic and is a good player for us. Maybe, Michael Martin can sign, who played wide receiver for us. I am also not giving up on the other three guys. Myron had a fibula fracture that set back his season in Week 4. I think he has recovered from that injury nicely and I believe that he can play at the next level. I just hope the injuries don’t hurt him severely.”

So far, it has not hurt him too bad as schools like Southeastern, ULL, and Louisiana Tech have all shown interest in Myron Smith Jr. Smith’s main factors when choosing a school comes down to how much interest they show him, how far away from home it is, and if it also has his major.

Senior defensive lineman Alex Self has been named All-District on the offensive and defensive line, which shows off his versatility. What is more impressive is that he also made the All-State team in which he had an impressive 37 tackles, 10 sacks, 14 tackles for loss, and one forced fumble, and one fumble recovery. Despite all of the accomplishments, Self has received no offers from any schools. Still, the persistent Self wants an opportunity to play the game and it does not matter who gives him that chance.

Likewise, both Muses, Martin, and Dreveion Hitchen, are looking for their opportunity to come knocking on the door.

Speaking of knocking on the door, the recent success started by Coach Brown and carried on by Coach Felder has cemented the Hawks as a Class 2A power. Even though the Hawks did not go back to the Dome, Felder led the team to a 10-3 record and fell a trick play short of advancing to the semifinal game after a loss against another great program in Ferriday. Coach Felder believes that the team’s already bright future can be brighter. 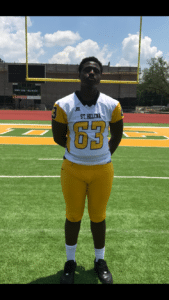 “This year had its ups and downs,” Felder said. “I think we got things rolling towards the end of the season and we started to play dominant football. I think we got it rolling at the right time in the playoffs trying to make a push. Unfortunately, we lose that game to Ferriday and that loss did hurt trying to get to the semifinals. For 2019, we are going to lose a lot of guys upfront. I feel like we have a great nucleus of skill guys. We have a young front next year and we will not be as so much pounding the ball like we did last year because of that. We still have really good speed for next year.”

One thing is for sure and that is the Hawks will have the athletes to not only produce another successful season on the field, but also turning players at the next level off the field in 2019.