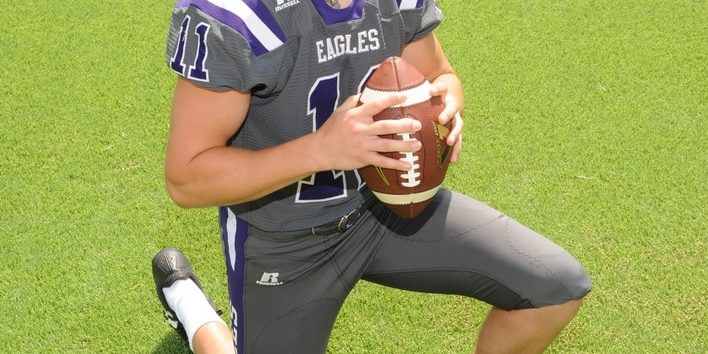 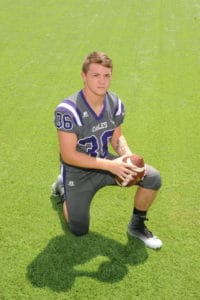 After previously holding a 20 game losing streak from 2015-2016, the Rosepine Eagles resurged in 2017 with an incredible 10-2 record. Just when it seemed everything was coming up in the off-season, the Eagles had a setback when Head Coach Johnny Cryer resigned before the start of the season. Still, like mentioned earlier, it was a little setback as first year Head Coach Brad Ducote came in, but the team actually did not miss a beat bettering their record from a season before to a 11-1 overall record in 2018. From losing 20 straight games in two years to winning over 20 games the next two years, there has not been a more impressive turnaround than what the Rosepine Eagles have done especially in this quick of a turnaround. In order to change the face of a program, the coaches must convince the players to believe in the culture and that is what these two coaches have done. Two players that have epitomized the Rosepine turnaround are very similar. In fact, these two players play in the backfield and if that is not similar enough, they are both named Seth. The backfield duo of senior QB Seth Ducote and senior RB Seth Shirley have been a great one two punch in the area. Louisiana Football Magazine’s recruiting expert Lee Brecheen loves what this duo brought to the table for the Eagles’ offensive attack.

“Seth Ducote is one of the best players in the district,” Brecheen said. “Ducote was a big time leader that has a good arm and runs like a running back.”

“Seth Shirley is another big time player in the Lake Charles area and has put up some big numbers in the running game,” Brecheen said.

In fact, both players have put up some big numbers during their Rosepine careers. Ducote will come down as one of the best players in Rosepine history as he has accomplished a lot at different positions and in different years. As a sophomore in 2016, Ducote was a second team All-District wide receiver. As a junior in 2017, Ducote had a breakout season earning All-District and All-Vernon Parish honors as an athlete. This year, he saved the best for last guiding the team to a 10-0 undefeated regular season while being named All-Vernon Parish and All-District offensive MVP. Ducote showed that he can get the job done in the classroom as well earning Academic All-State honors. When defenses were keying on the 6-1, 185 pound quarterback, his counterpart Seth Shirley was getting it done on the ground game. This season, the 5-11, 180 pound senior running back ran for 1,680 yards and 23 touchdowns. Despite all the success from this duo, there is only one collegiate offer between the two. That offer belongs to Ducote and it comes from Culver Stockton College. Both players believe they could fit in a program and would love an opportunity to showcase their skills at the next level.

“If the right opportunity presents itself, I would love to play at the next level,” Ducote said. “My biggest strengths to my game are my dual threat ability and a good understanding of the game.”

“That has always been my dream to play for LSU one day,” Shirley said. “I am a power runner and I have good vision as well.”

For the duo, the turning point of their playing careers was when they finally won their first game in two seasons. Finishing that game off with a victory has only catapulted the team and their individual high school careers.

“My most favorite game that I was a part of was in Week 1 of 2017,” Ducote said. “We broke a 29 game losing streak by defeating Merryville. It was a turning point in our program.”

Defeating Merryville to catapult the 2017 season and getting a Head Coach Brad Ducote to replace Johnny Cryer was another big reason the Eagles were able to duplicate their success in 2018 according to Shirley.

“At the beginning of the season, we struggled a little and then Coach Brad started talking to the team and we bought into the process of becoming a good team,” Shirley said. “He challenged us everyday to be better. I was totally comfortable with Coach Brad taking over because he has been my coach since I was four. I think him taking over meant a lot to the team as well and he did a really good job this season especially accepting a head coach opportunity unexpectedly.”

It has not always been perfect for the Eagles, but this senior group posted a undefeated regular season and have established the Eagles as one of the best football programs in Class 2A. The season may have ended in a loss against the DeQuincy Tigers, but both players could not think about playing for a more perfect team considering everything they have been through.