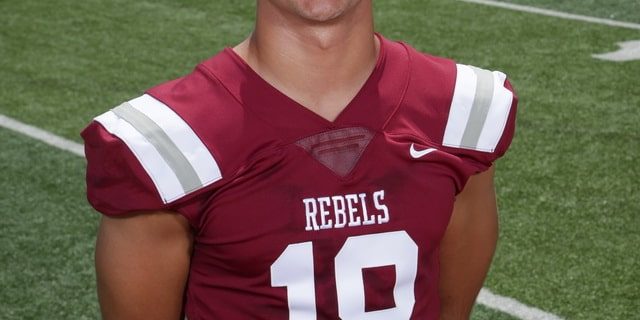 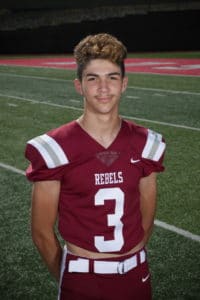 At the beginning of the 2017 high school football season, the Pineville Rebels’ football team got a big time boost when a legendary name became the head of the program. That man is none other than former Evangel Christian Academy Head Coach and Louisiana College Head Coach Dennis Dunn. In just two years, there are already signs of improvement. Before Dunn took over the program, the Rebels went 1-9 in 2016. In Dunn’s first season, the Rebels improved that mark by winning two games and now in year number two, Dunn has made a big jump from leading the program to two wins to four wins and making the Class 5A playoffs. In order for the turnaround to happen and especially with a new head man, it is the upperclassmen that has to step up as leaders both on and off the football field. Luckily, for the Rebels, this senior class has stepped up to the task.

“There has certainly been a foundation being laid moving forward thanks to what this senior class has accomplished,” Dunn said. “This group of seniors led us to the playoffs for the first time in a number of years.”

The Rebels have helped set the foundation thanks to their seniors and Louisiana Football Magazine’s Lee Brecheen believes that there are a couple of sleepers that could make their names known from this time up until February.

“Jacob Sylvia is about 6-2, 180 pounds,” Brecheen said. “He had some knee injuries, but he could still play at the I-AA level. If he can stay healthy, he can still pull it off because of his frame and his 4.55/40 speed.”

“Braylen Wilcox is a big time sleeper,” Brecheen said. “Wilcox is about 6-5, 280 pounds. He is a late bloomer that could be a steal for a I-AA school.”

“Mikinzi Nash is an all out warrior,” Brecheen said. “He is a guy that brings it every play and could play for a D-II or a D-III program.”

According to Coach Dunn, there is one player that is pretty certain to play college football at the next level.

West is a first year starter at quarterback, but he is overall a three year starter for the Rebels, whether it has been playing wide receiver or free safety. In only one year as a starter, West showed what he could do as a quarterback accounting for over 2,352 yards and 27 total touchdowns. The All-District playmaker also has had 60 tackles, two interceptions, and seven pass breakups on defense. Besides some of the military academies, West has received a couple of offers from programs such as Belhaven University, Lawrence University, Texas Wesleyan University, Beloit College, Cornell College, Ohio Wesleyan University, Wabash College, Millsaps College, etc. While West will decide where he wants to play college football, the other three players will try and find their opportunity to play at the next level.

As far as safety Mikinzi Nash’s college football plans are concerned, he currently has no offers, but is looking for an opportunity to play at the next level. With plenty of on the field accomplishments such as 1st Team All-District and All-Cenla as well as over 200 tackles to his name, the 5-10, 170 pound defensive back believes that his tackling ability could be put to use in college.

“My biggest strengths are great ball vision, and good open field tackling,” Nash said. “I am also very coachable, dedicated, and accountable. Football is one of my biggest passions.”

Soon, with the great fundamentals and intangibles that these underclassmen learned from this senior class, Pineville fans will be even more passionate about their team. According to Coach Dunn, what these seniors have done whether they play or do not play collegiate football will always reflect on the evolution of the program itself.

“Certainly, that standard has been set and we are looking forward to build on that,” Dunn said.