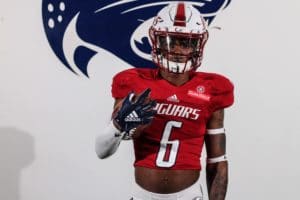 The Patterson Lumberjacks have always been a proud football program that has had plenty of success over the years. After a couple of down seasons, the program made a big hire in hiring legendary Head Coach Don Jones. Coach Jones has had plenty of success with wherever he has been. Whether it has been coaching stints at Plaquemine High School, Wisner High School, Sterlington High School, Crowley High School, Winnfield High School, or Woodlawn (B.R.) High School, all Coach Jones has done is win. In fact, he is one of the winningest active head coaches in the state with a career record of 234-164-3. Even for such a big time figure as Coach Jones, he knew that it was going to take a while for the players to buy into his system especially after the program made its fourth coaching change in four years. It sure has been a rough go round for this senior class with all of the coaching changes and also, add in the fact, that the Lumberjacks won only one game in 2018, it made it even more tough.

Although, the results on the field was not what the team envisioned, there are still some very talented players that have a chance to play at the next level according to Louisiana Football Magazine’s recruiting guru Lee Brecheen.

“Patterson had themselves a big offensive lineman named Tron Clark that is 6-4, 260 pounds,” Brecheen said. “He’s got the frame and he is mean, but he still needs a little work. I see him as a I-AA guy.” 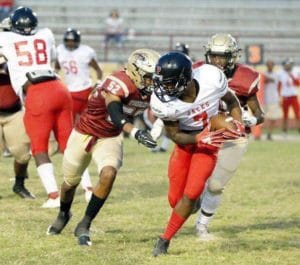 Both Butler and Celestine made plenty of plays at the skill positions, but both of them could not match the big time playmaking ability of one of the most underrated skill players in the 2019 class throughout Louisiana and that is senior ATH Dajon Richard. Richard has been really high on Brecheen’s list as he put Richard on the preseason 2nd Team All-South Louisiana team at the beginning of the season.

“Their star player Dajon Richard is a big time player,” Brecheen said. “I think he is a SEC type player. I think Dajon could be a star at several positions. He could be a defensive back, a wide receiver, a cornerback, and he even played running back for Patterson this season. Having that versatility really opened the door for a kid that can already run a 4.4/40 legit. He is 6-0, 200 pounds and is the biggest sleeper skill player as a senior in the state. I think the big schools missed on this kid.” 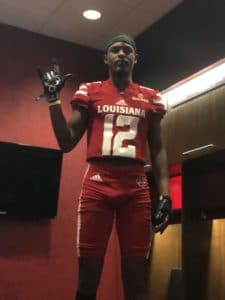 After originally committing to the Road Runners of UTSA, Richard decided to decommit from Frank Wilson’s team. Later on, Richard would not only commit, but sign with South Alabama on Thursday, December 20th. A big reason for the commitment was the program’s belief in Richard from the very start and that interest came a long way as far as the recruiting process in concerned. Richard can only imagine making an impact for the Jaguars as a freshman, but as of right now, he can focus on getting ready for that moment.

“I try to stay in shape by training,” Richard said.

Richard is not only really talented and versatile, but he is a committed player that tries his best in the classroom posting a 3.5 GPA and on the field.

So far, Richard has been the only player to sign, but Jaymioun Butler has received some opportunities to play. As of right now, he has received an offer from Louisiana College as well as a preferred walk-on opportunity with the ULL Ragin’ Cajuns. Besides Richard and Butler, the other seniors are still looking for opportunites to play at the next level.

This is still a strong starting point for Coach Jones regardless of record. Knowing that there will be a couple of guys leaving to play college football at the next level comes to show you that the talent is still there at Patterson High School.