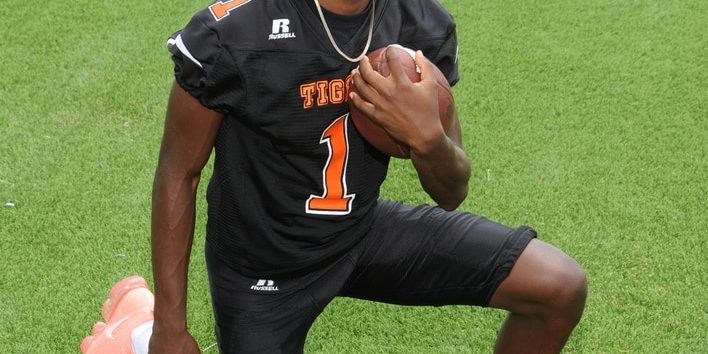 The Opelousas High School Fighting Tigers are in the process of rebuilding under second year coach Doug Guillory. The Tigers won five games in 2017, which is the most they have won in recent years. Coach Guillory looks to build on that in the 2018 season, and he has the right foundation to do that.

“Kenny is a big time sleeper athlete,” Brecheen said. “He is very fast. He’s not a quarterback for college, but he is playing there for his team this year. He will be a slot receiver or cornerback in college. He’s got very gifted speed and that is always a plus for college coaches. I think he’ll definitely go I-AA, but he may prove people wrong and go DI in the end.”

“Kenny may be one of the most electrifying players in the state this year,” Coach Porter said. “At the same time, he is the most underrated player in the state. He does everything for us. He has played quarterback, running back, wide receiver, and defensive back along with returning kicks and punts. Kenny’s 4.3/40 speed and versatility makes him a threat to score every time he touches the ball. He could go down as one of the best to come through Opelousas High School.”

At this point, Frazier has received offers from Cornell, Morehead State, and Arkansas-Monticello. He has been contacted by Kansas State, Oklahoma State, Tennessee, and ULL among others.

Having a player like this makes things easy for a coach. You can feel comfortable giving him the ball at any point in the game and know that he could make something big happen.

Braylon Roberts is a quick receiver that will complement Frazier on the offensive side of the ball.

“Braylon is one of those track guys that has had no issues making the switch to football,” Coach Porter said. “If he gets the ball with space to work, he has a chance to score. While undersized as a defensive back, he has made big plays in crunch time. The kid is a baller.”

Brecheen thinks much of the same.

The big man up front that will be manning the offensive and defensive line is Adrian Burns. At 6-2, 270 pounds, he will be a nightmare for opposing teams to deal with.

“Adrian is a lineman that can play both ways and plays with an edge,” Coach Porter said. “He has the type of impact that can affect opposing team’s blocking schemes. He has a high motor. A run stopper with an abundance of pass rushing moves. Whatever school gets his commitment, gets a kid that is ready mentally and physically to play right away.”

At this point, Burns has received interest from Nicholls State, ULL, Northern Arizona, and Louisiana College.

“I saw Adrian play at Opelousas Catholic before he transferred to Opelousas,” Brecheen said. “He’s a good looking lineman with great feet. He’s definitely a I-AA kid. Depending on the school he goes to, he could either play on the offensive or defensive line.”

Christian Joubert is the other senior that is starting to get attention from colleges. Brecheen thinks he will probably go D-II but could go higher with a great senior season.

“While slim in build, he makes up for it with his toughness and instincts,” Coach Porter said. “Joubert is 6-0, 160. Christian is one of the best, if not the best, tacklers on the team. He’s very versatile in being able to play free safety, strong safety, and corner. He’s a great leader and is like another coach on the field.”

Joubert recently received an offer from Louisiana College and has been contacted by UT Basin and Mary-Hardin Baylor.

There are three other seniors that have been having great seasons and should start getting looks soon. Those players are Christian Lecompte (OLB/DE), Tyger Thomas (TE/LB), and Jamar Savoy (DB/WR).

If each of these players keep playing like they have until this point, Coach Guillory will get the program to where he wants it to be and the Tigers will be competing for district titles.