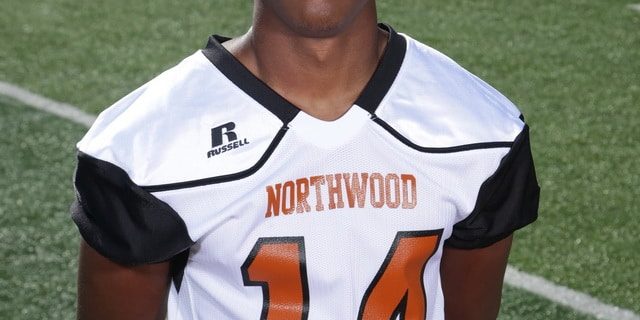 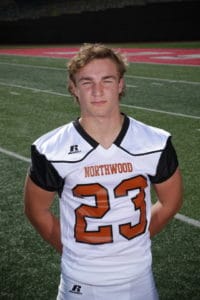 Northwood senior linebacker Tyler Lummus is one of the biggest kept secrets defensively in North Louisiana for the Falcons. (Property of LAFM)

The Northwood High School Falcons are coming off of a season in which they made it to the quarterfinals and lost to eventual Class 4A champion Edna Karr High School Cougars. Coach Jim Gatlin has many players returning off of that quarterfinals team and they are poised to have another successful season.

The defense will be led by two hard-hitting linebackers in Tyler Lummus and Kyren Brown. Louisiana Football Magazine’s own recruiting specialist Lee Brecheen says that these two guys are special.

“Tyler Lummus is a great football player,” Brecheen said. “Throw away the stopwatch and grade from the film in pads. You get a big time I-AA steal for a linebacker and if he grows into a 230-pound player in college, he will be a I-AA starter and leader. He could play for some D-I teams as well and is a relentless player.”

“My strengths are run reads and attacking down hill,” Lummus said. “I pride myself on running from sideline to sideline.” At this time, Lummus has received interest from Mississippi College and Northwestern State.

“Brown is a steal for a D-II program looking for a tough kid that can close as a hitter,” Brecheen said on Brown.

Brown is the type of player that any college would love to have on their roster. “I love to tackle and love making plays,” Brown said. “I love watching film to get better.”

It will be tough for the opposing team to game plan against these guys each week with how tough they play.

The Falcon offense will be led by wide receiver Trayon Jones. 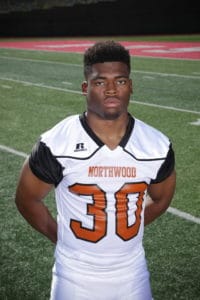 Northwood senior LB Kyren Brown along with his teammate Tyler Lummus makes this linebacking core one of the very best in the state. (Property of LAFM)

“He is a special player I saw on film in several games,” Brecheen said. “Forget height, forget size, throw it all out the window. This kid is special and is the poster boy for what a slot receiver for a big time college should look like. He is a great route runner with 4.4/40 speed, r good hands, and has toughness to boot. He has a chance, in my opinion, to be special in college and could play for anyone in the country.”

At this point, Jones has received an offer from Arkansas Monticello and has interest from Tulane, SMU, Southern Miss, and Kansas State among others. Jones can be a big name in college football like his cousin and current LSU star Andraez “Greedy” Williams.

Helping block so the quarterback can get the ball to Jones is 6-3, 295 offensive guard Walker Elkins.

“Elkins is a player that is a legit I-AA player now and in college could become a D-I steal,” Brecheen said. “He has a lot of room to be better in two more years.”

At this time, Elkins has received from Northwestern State and North Texas.

So far in the 2018 season, the Falcons are 4-0 in a season, which they had high expectations going in. 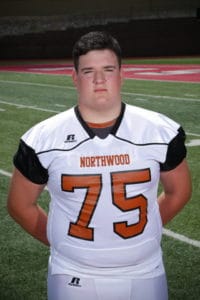 “My expectations for the Northwood football team this season is to go down as one of the best unbeaten 4A teams,” Brown said.

That is an extremely high expectation but that is expected from someone in a football family. Brown’s uncle Kenneth Jackson was a linebacker at Louisiana Tech.

The team has been able to learn what their strengths are after their first 4 games.

“Our strengths on defense is that we are dominant up front,” Lummus said. “When everyone does their job, we are unstoppable”

“I do not think the line gets enough credit to be honest because without them, we couldn’t run a play,” he said.

With this phenomenal start going into district play, the Northwood Falcons can continue to be hot and be a nightmare for opposing teams the rest of the season.