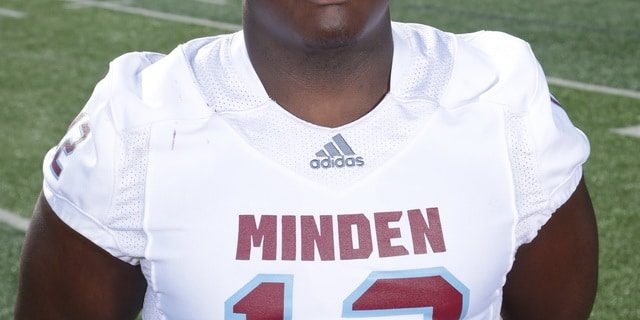 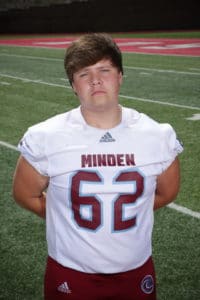 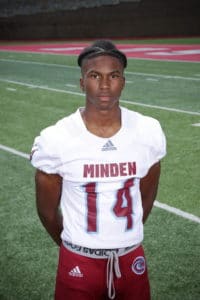 The Minden Crimson Tide may have had a disappointing season finishing with a 3-8 record, but this year’s senior class was still one of the most talented and most accomplished senior classes in program history. In the previous three seasons before 2018, the team finished with a combined record of 25-11 including an impressive 11-2 season in 2016. Led by Coach Spencer Heard, who has won close to 60% of his games since he first took the Minden Head Football coaching job in 2013, this team has really turned around in the middle of the season. Actually, the year could have been better for the Crimson Tide as four of those losses came within seven points or less. Still, the team was able to draw a playoff game losing in the first round against the eventual Class 4A state champion Edna Karr Cougars. Seniors JeCareon Lathan and Noah Peters, who were both accomplished players during their tenures, knew that their senior season could have been better, but they realized that they did everything they possibly could do to help put their teammates in a position to succeed.

“I feel like the players did their thing,” Lathan said. “They played hard and the coaches did a great job of coaching us. Just things were not going our way.”

“Despite our record, we had a solid team,” Peters said. “We just had young players in spots that need to be experienced. We were very solid on defense, but our team just had mental mistakes that killed us in crucial times.”

Lathan and Peters, who have been mentioned before, will be two key losses for the Crimson Tide. 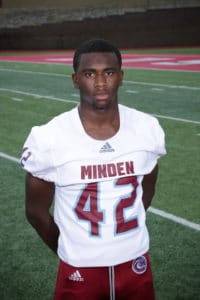 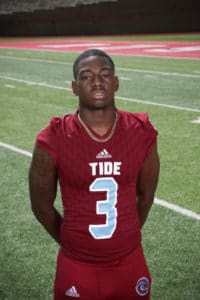 At 6-0, 175 pounds, Lathan has been one of the best defenders for the Crimson Tide over the last three seasons. In his sophomore season, he received the most improved award on the team. In his junior year, he received 1st Team All-District honors as a cornerback having 11 interceptions. In the beginning of his senior year, he added more three interceptions in the first three games of the season before moving to slot receiver and making an impact on the offensive side of the football with 11 touchdown grabs while receiving 1st Team All-District honors as an Athlete. With Lathan’s ability to make plays, he received offers from Northwestern State, Arkansas Pine Bluff, Ouachita Baptist, Stephen F. Austin, and Southern Miss, but he instead signed at the junior college level with Trinity Valley Community College.

“It felt like a home away from home for me,” Lathan said.

Lathan has had a lot of opportunities to play football, but unfortunately, senior offensive lineman Noah Peters has not drawn as much attention.

At 6-1, 260 pounds, Peters has played both center and right guard while receiving 1st Team All-District, All-Area, and All-Parish honors. Even though Peters has received some interest from Louisiana College, he has yet to receive any offers. 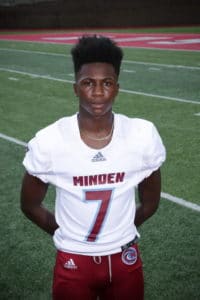 “I feel like I was overlooked,” Peters said. “My mindset is different than others. I am a very hard worker and just because I am not 6-3 or 6-4, it does not mean I can’t play.”

As of right now, Peters is planning on attending NWLTC (Northwest Louisiana Technical College) to get his welding degree and become a pipeline welder. However, if a team were to offer him a scholarship, he would definitely consider playing.

Louisiana Football Magazine’s recruiting guru Lee Brecheen believes both Peters and Lathan can make an impact at the next level.

“JeCareon Lathan is a great defensive back,” Brecheen said. “He is very much overlooked and is a guy that is long, tall, mean, and can run. He can be a great player. Noah Peters is a very athletic center at 6-1, 260 pounds. He has good, quick feet, and I think he is a DI player. Maybe, if he was a little bit taller, he would be getting more interests.”

If there is a player that Brecheen believes could be the biggest pickup of this talented Minden class, it would be DT Braxton Jackson. Earlier this year, Brecheen not only selected him on the 2nd Team All-North Louisiana team, but he also put him on the cover of the North Louisiana Preview Magazine cover, and for good reason. At 6-3, 285 pounds, Jackson had 54 tackles, six sacks, and a blocked field goal as a junior. Also, he was 1st Team All-District, 1st Team All-Area, and All-Parish defensive MVP as well as a player of the year nominee.

“Braxton is as good as anybody in the state,” Brecheen said. “He is an SEC impact defensive tackle/defensive end. He is one of the top 10 players in the state. I saw him play tight end and fullback. He is very gifted.”

Like his other star teammate Lathan, Jackson will also carry his talents to the junior college level. Jackson has signed to play for Tyler Junior College.

So far, Lathan and Jackson are the only two Crimson Tide seniors to have sign to play college football. However, players such as OLB Stefan Wheeler, SS AJ Lister, FS AK Combs, and CB Zi Crawford are all players Brecheen believes could find somewhere to play. Even though these seniors are now enjoying their last moments as seniors, they used this as an opportunity to give some advice to next year’s seniors.

“My advice to next year’s Minden team is that I love y’all boys,” Lathan said. “Keep working, play your position, do your job, and go to some camps and make a name for yourself.”

“Don’t worry about the haters,” Peters said. “They are always going to be there. Worry about what your job is as a player and strive to achieve your goals everyday. Work to the best of your abilities everyday. Don’t doubt yourself when things get hard because it’s not going to be easy, but in the end, it will all be worth it.”

Next season, the Crimson Tide will try to make it all worth it with a bounce back season in 2019.