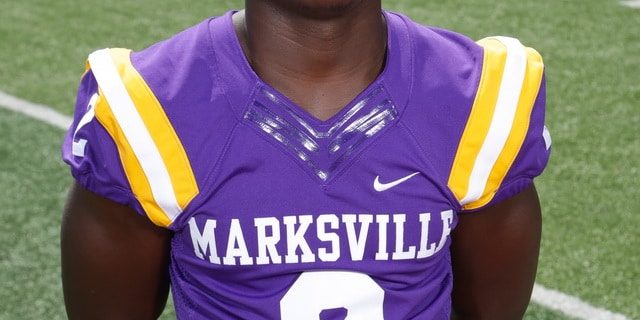 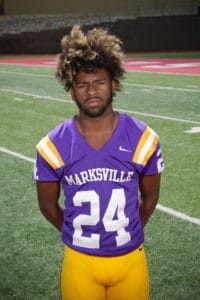 Going into the 2018 regular season, Coach J.T. Dunbar and the Marksville Tigers knew this could be a special season with 16 players returning from the 2017 squad.  Some of those players include linebacker/safety Clifford Champ, CB Damion Jacobs Jr., LB/RB Trajan Alexander, and OL Alex Bordelon.

This group of seniors knows what it takes to win and they played key roles in bringing this 2018 team to the playoffs.  Louisiana Football Magazine’s own Lee Brecheen got to see this team on tape and had lots to say about them.

“Clifford Champ plays linebacker and safety for the team,” Brecheen said.  “He’s a big time player who closes fast and is not scared of anything hitting wise.  He’s one of the toughest players on the team. He’s got good speed at 4.5/40. He’s also great in the classroom.  I think he’s a legitimate I-AA prospect as a strong safety.”

Also playing linebacker for the Tigers is Trajan Alexander.  He is a talented linebacker, but also runs the ball some for the offense.

“Alexander could go D-II,” Brecheen says.  “He’s a linebacker and running back for the team. I think he could get away with playing strong safety or outside linebacker at a D-II school.  He could possibly go I-AA as a running back. He might be a guy that has to go to a junior college first, but he still has a chance to qualify.”

Patrolling the defensive side of the ball along with Champ and Alexander is CB Damion Jacobs Jr.  He is all over the field and makes big plays for the Tigers defense. 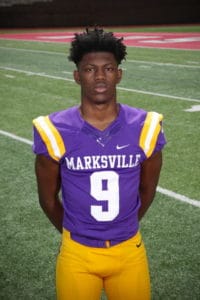 Anchoring the offensive line is Alex Bordelon.  He is not the biggest player on the field, but the defensive lines feel him when he is in the game.

“Bordelon is an offensive lineman that could end up D-III,” says Brecheen.  “He’s not big at 5-8, 241 pounds, but he’s very tough. He is one of the team leaders.  He’s a great blocker with quick feet.”

This team will take a hit when these guys graduate, but Coach Dunbar is known for winning games with a young team.  He will have new players step up and veterans take on leadership roles.

The Tigers had a tough 18-12 loss to Baker High School in the first round of the playoffs to cap off a good 2018 season.  With a good group of players coming up along with this playoff experience, the Tigers will be a force to reckon with and should be seen deep in the playoffs in 2019.