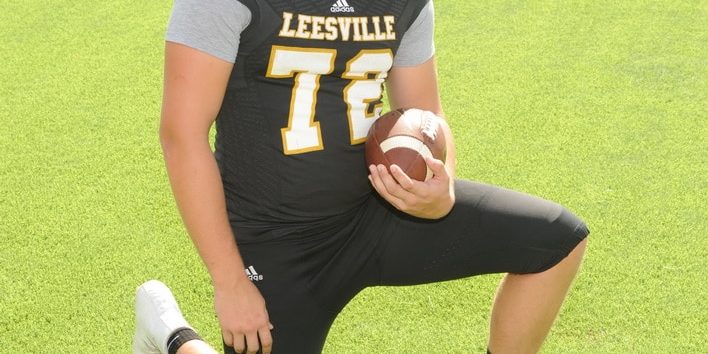 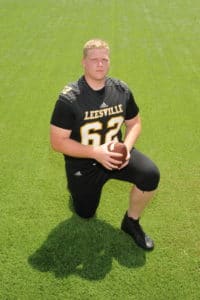 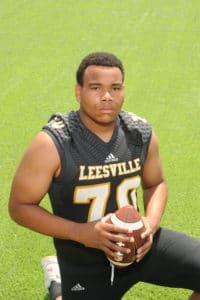 In only a four year period, the Leesville Wampus Cats have established themselves as one of the elite teams in the state once again. A lot of the Wampus Cats’ success should be credited to Head Coach Robert Causey. When Causey took over the Leesville program, it was a team that won only three games the year before. There was immediate progress once he took over the head job in 2016. That season, the team finished with an overall record of 7-5 losing to Edna Karr in the second round of the playoffs. The next year, the team took the next step by winning ten games losing in the second round of the Class 4A playoffs to Rayne. It was the best season since when Michael Ford (LSU) helped lead Leesville to a 9-3 season. Then, there was this past season, which was one for the ages. The Wampus Cats went undefeated in the regular season and reached all the way to the Class 4A semifinals where they lost to the eventual state champion runner up Warren Easton Eagles. Over just that three year span under Causey, the team recorded an overall record of 30-8 winning close to 80% of their games.

Just as much deserving credit as there should be given to Causey and how he has build this football program up, there should also be a lot of credit given to this year’s senior class. In order for Causey to accomplish what he wants to accomplish, the senior class had to buy into what their head coach was selling them and that is what they have done.

Louisiana Football Magazine’s recruiting expert Lee Brecheen firmly believes that this senior class is one of, if not, the best classes in program’s history and deservingly so, considering their accomplishments. 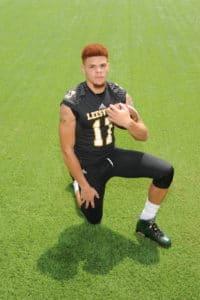 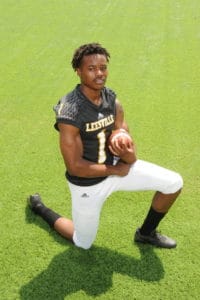 “This has to be the best Leesville senior class in 15-20 years or maybe even more,” Brecheen said. “This is just a special group of tough seniors. In-state colleges should really try to convince some of these players that are on the fence of playing at the next level to consider walking on. They had a great year and had a great offensive line to take them there. If they were a little bigger on the defensive side of the football and had a little bit of more depth, they could have gone all the way.”

Like the old saying goes, games are won on the line of scrimmage and if you look at this past year’s offensive line for the Wampus Cats, you would then immediately know why they had the type of season they did in 2018.

The big five upfront is led by its biggest prospect in 6-7, 270 pound OT Matthew Anderson. Anderson was highly regarded by Brecheen before the season as he put Anderson on the cover of the South Louisiana magazine edition. As Brecheen got to know him a little more especially when he made an appearance on our T.V. show earlier this year, Brecheen even grew more appreciative of the three star prospect.

“It is a headscratcher for me that LSU did not offer Matthew Anderson,” Brecheen said. “I know that they contacted him late, but still, I find that really surprising. At 6-7, 270 pounds, he will grow in the weight room and be around 310 pounds when he gets to college. He can also run a 5.0/40 and could possibly improve his time to a 4.9/40 over the off-season. He will be a pro prospect in a couple of years. His dad is from Minnesota and is a tall guy himself. He has the versatility to play either guard or tackle. Anderson is also a chess player and is really smart, but also very quick. He can become a dominant player.” 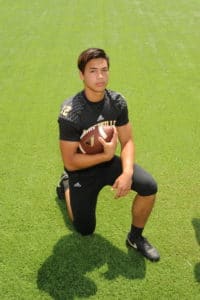 As one can see, Brecheen is high on Anderson, but he is also high on the other linemen up front.

“At 6-6, 310 pounds, Montae Lynch is raw, but very strong and has great feet,” Brecheen said. “He is going the JUCO route, but he could be a big time DI sign back in a couple of years. There is also Brett Pope, who was an unsung hero of the team as a center. At 6-4, 302 pounds, he is a big strong kid that can be an offensive guard/center in college. Payton Lipps is a no-brainer D-II, I-AA walk-on type player. Finally, there is Caleb Westfall, who was only 6-1, 210 pounds, but he played like he was 290 pounds. He could either be a D-II or D-III type player.”

It is crazy to think that the Wampus Cats had three linemen 270 pounds or more, but it was this tight knit group that opened up huge holes for the running backs to run through.

“Well, it goes without saying, I had the honor of playing with some of the best guys around,” Anderson said. “Brett Pope was the biggest and meanest guy I got to play with. Brandon England was a true young bull who never failed to impress me at right guard. Payton Lipps was the best teammate around and always put the team first at left guard. Then, there was big dog Montae Lynch, who never ceases to surprise me with the different ways he finds to knock people over.”

For the group of players, each has decided to take their own path.

Westfall, who was an All-District Honorable Mention, is planning on attending LSU as a student next fall.

Although Lipps was shown interest by other football programs, the All-District player is thinking about applying to Louisiana Tech as just a student.

Like mentioned before, Lynch will be playing college football at the junior college level for Tyler Junior College.

Then, of course, Anderson has signed with the Nebraska Cornhuskers.

“Unlike the SEC schools that I felt should have had faith in me because I was a more local kid, but didn’t, Nebraska was 100% sold on me and didn’t make me wait for anything. They saw me and believed in me from the beginning.”

Even though having a big offensive line is nice, having playmakers and leaders on your team is even better. The Wampus Cats had those type players as well especially in their senior class.

Second, there is Demarcus McCord, who is a 6-1, 190 pound wide receiver/defensive back from Georgia,” Brecheen said. “He would make a great D-II player and could grow into a linebacker.”

“At 6-0, 170 pounds, Nigel McCoy is a great form tackler as a defensive back with 4.6/50 speed,” Brecheen said. “He needs to get a little bigger and stronger, but he could eventually become a I-AA walk-on.”

“Aaron Hunter is another tough and tenacious player at 6-0, 230 pounds,” Brecheen said. “He could play at the D-III level.”

“Finally, there is Matthew Pajinag,” Brecheen said. “Pajinag is only about 6-0, 200 pounds, but he was the heart and soul of that defense. If he wants to continue playing, he could be a really good D-III linebacker.”

There are a couple of those players that have also decided what they wanted to do.

McCoy, who was an All-District defensive back and ended his high school prep career with three interceptions, 157 tackles, a touchdown, and two fumble recoveries, received some interest from colleges including Tyler Junior College, Trinity International University, and Lyons College. However, McCoy is still looking at some options about where he wants to play.

“I see myself attending McNeese State, ULM, or ULM,” McCoy said. “Those are my top three schools.”

McCord has been also very active in his career with two pick sixes, 138 tackles, 16 tackles for loss, 13 sacks, and 18 pass deflections. Like McCoy, he sees himself playing somewhere next year.

“I see myself going to college at Tyler Junior College,” McCord said.

Pajinag was a tackling machine with 130 tackles in only ten games played last year. That drew the attention of one NAIA program, which offered him, as well some attention from bigger schools such as Louisiana College and Northwestern State. Even though Pajinag does want to play football at the next level, it looks like he might take a different route.

“I will probably attend Northwestern State or LSU in the end. However, no matter what school that I want to attend, I am determined to play football there ,” Pajinag said.

No matter what these seniors decide to do, they will always remember the passion of Friday night football playing at Leesville and being a part of those great teams.

“We accomplished so many things over the last fo years,” Westfall said. “I am so proud of this team and I want to tell the underclassmen to carry on the Wampus Cat tradition as well as cherish every moment on the field before it is all gone.”

“I am going to miss playing the game and being on the field with my brothers,” McCoy said. “I will miss the best coaching staff in the nation because we wouldn’t have gone 10-0 without them.”

“All I can tell them is to keep working,” Lipps said. “There’s always room for improvement.”

“Make the most of every play,” Pajinag said.

“My advice to next year’s Leesville team is to just enjoy every moment on that field like it is your last player together,” Tolbert said. “Also, have fun and no aim to be like this senior class, but aim to be even better.”

It is a reach, but next season’s team is willing to try and do that.