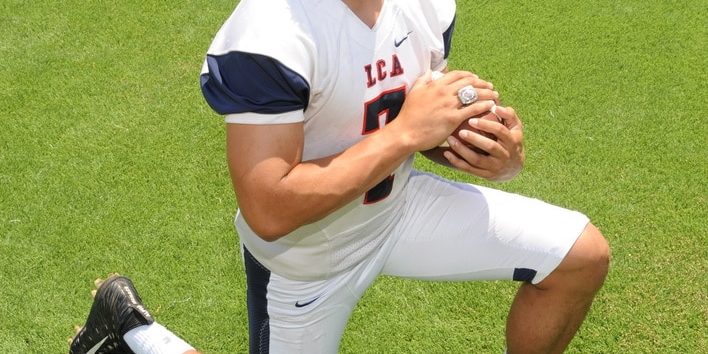 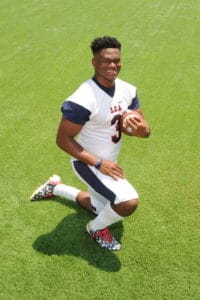 Many of these seniors mentioned above have aspirations of playing in college and Coach Faulk knows what it takes to get there. Coach Faulk played college football at LSU where he was a linebacker from 1999 to 2001. During his time at LSU, he was awarded many honors including the SEC Academic Honor Roll and All-SEC Team among others.

After his college career, Coach Faulk went on to play in the NFL. During his five year career, he played for the Arizona Cardinals, St. Louis Rams, and the New Orleans Saints. Once he left the NFL, Coach Faulk started coaching and became a full-time coach in 2011. In 2016, he was able to get the head coaching position at Lafayette Christian Academy and won a state title in his second season at the head of the program.

At this point in the season, they are 10-0 and headed back to the playoffs. Coach Faulk said he has a great group of players and does not see them getting complacent as they try to repeat as state champions.

“The most impressive thing that I’ve seen from my kids has been their maturity in handling every opponent the same,” Coach Faulk said. “They come out and prepare Monday through Thursday and go out and have success. We haven’t really had any times where I’ve had to talk to them about effort in practice, or playing hard, or taking an opponent seriously. They prepare really well and the results speak for themselves.”

This year’s senior class is to credit for the hard work and leadership. Each of the seniors plays a major role for the team and Coach Faulk is lucky to have them on the team. Coach Faulk and Louisiana Football Magazine’s own recruiting specialist Lee Brecheen agrees that these players are extremely talented.

Martin Lee III will lead the defense in 2018. 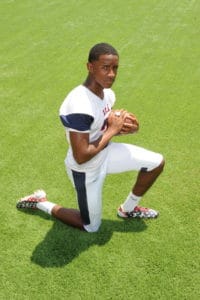 “Martin Lee is a three year starter for us at inside linebacker,” Coach Faulk said. “He’s a sideline to sideline player. He’s a great leader for our team.”

“If Martin was 6-0 or 6-1, he would be offered by LSU,” Brecheen said. “He’s just a talented football player. He’s got a knack for the ball and is one of the better linebackers in the Acadiana area. He doesn’t have a great 40 time, but looks fast on the field. I think he will be a great D-II or I-AA guy in the end.”

If anyone gets past Lee, Ca’lib Watts will be there to pick him up.

“Ca’lib Watts is our safety,” Coach Faulk said. “He’s really good in the alley playing against the run. He’s improved tremendously as a pass defender over the last couple of years.”

“Watts is a very good athlete,” Brecheen said. “He will probably get an opportunity at the D-II or D-III level.”

The offense will be led by returning star Zachary Clement at the QB position.

“Zachary Clement is a dual-threat QB,” Coach Faulk said. “He runs it well and throws it well. He is just an all-around great kid. He’s great in the classroom and is a high character kid. He’s a heck of a football player and will be a steal for whoever signs him at the next level.”

“Clement is a hot commodity,” Brecheen said. “He missed most of last year with an injury. He is kind of like the first QB in the program having started in 8th grade I think. He is very underrated and could be the next Chase Fourcade (Archbishop Rummel/Nicholls State) that goes to a Southland conference school. He could end up getting a D-I offer in the end. He’s got the size and the talent. He’s very athletic. If he was at a school like Acadiana High School,  he might be recruited a little heavier. The bottom line is, at the end of the day, he is going to go somewhere and be very good.” 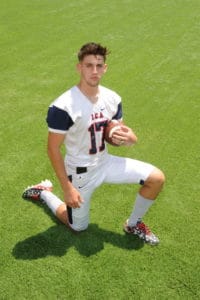 One of the talented guys that Clement will be throwing the ball to is slot receiver Montreal Felix.

“Felix plays in the slot for us,” Coach Faulk said. “He’s an undersized guy but plays with a lot of heart. He’s a great kid and extremely quick. He’s your typical undersized waterbug type of player that we use in the slot.”

There are two seniors on the offensive line that will be blocking for Clement and they are Devin Charles and Nick Ancelet. Brecheen believes that both of these guys will be D-III prospects in the end.

“Devin Charles is a three year starter on the offensive line,” Coach Faulk said. “He’s really gone from average to good to being a pretty dominate force for us up front this year. The same can be said for Nick Ancelet. He’s also a three year starter for us. Ancelet and Charles have been playing next to each other at left guard and left tackle so they know each other really well. They have really good chemistry at those spots. They really want us to run the football behind them.”

The guy that not many people talk about is one that Coach Faulk says gives them an advantage every week and that is K/P Colin LaHaye.

“Colin LaHaye is one of our secret weapons,” Coach Faulk said. “Typically, every Friday night, we have an edge on special teams because of what he does as a punter and a kicker.”

“Colin has a D-I leg,” Brecheen said. “He might have to walk-on at a D-I school and win the job. I can see him going to a ULL or a Louisiana Tech and winning a job. He may end up signing somewhere in the end.”

Coach Faulk is lucky to have such a great group of seniors that he can count on for the 2018 season. They will be leaned on in the postseason as the Knights look to make another run and win back-to-back Division IV state titles.