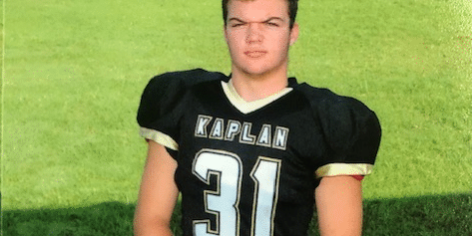 The Kaplan Pirates have not been loaded with DI recruits like other successful Louisiana high school football programs, but Coach Stephen “Tank” Lotief and the rest of his coaching staff has done an excellent job in developing great players that are both tough and physical. One of those players that perfectly exemplifies that model is Kaplan High School senior linebacker Rhen Renfrow. Despite the fact that the Pirates’ three consecutive semifinal appearance streak was ended in 2019, the 6-1, 215 pound linebacker proved to be one of the biggest bright spots for the program to build on. Last season, Renfrow proved to be a tackling machine everywhere on the football field with 117 tackles. Bringing ballcarriers down is what Renfrow does best and it is the reason why he is in love with the game.

Football is a game of more than just hitting everything you see on any play, and that is why the senior Kaplan linebacker has other important facets to the game other than being physical at the point of attack.

“My biggest strengths in football is the dedication to grind through hours of studying film and preparation for the next game and then turn that mental preparation into physical execution,” Renfrow said.

Because of what he could do both mentally and physically in preparation, Renfrow often criticizes himself too often when making a mistake, which is something he is trying to do better this season.

” I need to improve not being so hard on myself and understand that I am not perfect,” Renfrow said. “Mistakes will happen even on my journey to perfection.”

Despite being nearly impossible to accomplish, Renfrow is looking for a perfect season not only as a linebacker for the team, but also as the team’s starting tight end as well.

“My goals for the upcoming season is to get even more tackles than last year,” Renfrow said “I am also striving to make 1st Team All-State and to lead my defense in a way that wins games.”

Another linebacker that did help lead his team to wins back in his heyday at Oklahoma is Renfrow’s idol, which is Brian Bosworth (Oklahoma/Seattle Seahawks). Besides their intensity, passion, and the fact they both play the same position, both players share a lot more in common.

“The player that influences me the most to play how I do is Brian Bosworth,” Renfrow said. “Just watching him play hard and aggressive is so unreal, and that is what I am striving toward. Also, the connection he had to his grandpa is almost the same as I have with mine. Brian played for his grandpa the same way I play for mine.”

Along with his grandpa, Renfrow is playing for an opportunity to play college football at the next level. Despite the fact that he currently has no offers, that has not stopped him from trying to accomplish those future goals.

“I have not gotten any firm offers yet, but I have received a few emails prior to COVID,” Renfrow said. “I think being from such a small town college may pass over me because I am from an unknown town, but sooner or later, cream always rises to the top and I cannot be unnoticed for much longer.”

The Pirates have been known to be the cream that rises to the top after their success from 2016-2018 reaching the semifinals. Even though the Pirates’ semifinal streak ended in 2019 losing to the Sterlington Panthers in the second round of the Class 3A playoffs, Renfrow is confident that there is a lot to carry over towards the end of last season.

“I think as a team we were pretty solid towards the end of the season,” Renfrow said. “I think we could’ve made it further if we were clicking earlier.”

Now, with 17 seniors returning including Renfrow for the upcoming season, the Pirates are expecting to be right there in the end.

“The key to reaching the semifinals this year is to just keep playing Kaplan football,” Renfrow said. “The seniors, including me, need to be leaders on the field and lead by example. We will need to keep our drive and desire strong to continue the Kaplan tradition.”

The Kaplan tradition is to not only win football games, but also to make sure the other team knows that they have felt the Pirates’ presence.

“Our message is no matter who you are, as soon as you step on the same field as us, we are busting you right in your mouth,” Renfrow said. “Like Mike Tyson said, “Everybody has a plan until they get punched in the mouth.”

“An interesting fact about me is that I can play 6 instruments fluently,” Renfrow said. “I can play the guitar, the piano, the bass guitar, ukulele, the mandolin, and the tuba. I am also a devout Christian. I truly believe I can do all things through Christ who strengthens me.”

As big as his hard hitting tackles, Renfrow wants to make that much of a difference once he enrolls in college.

“My goals once I get to college are to prove everyone who doubted me wrong,” Renfrow said. “I will continue the pace of my game and keep pushing forward. Also, I am planning on getting my bachelors degree in engineering so I can go be an engineer for NASA or SpaceX.”

Whether it is personal motivation or doing it for the benefit of others, Kaplan High School’s Rhen Renfrow will make sure that his talents both on and off the field will be put to good use in 2020.

Click the link below to check out Rhen Renfrow’s junior highlights: