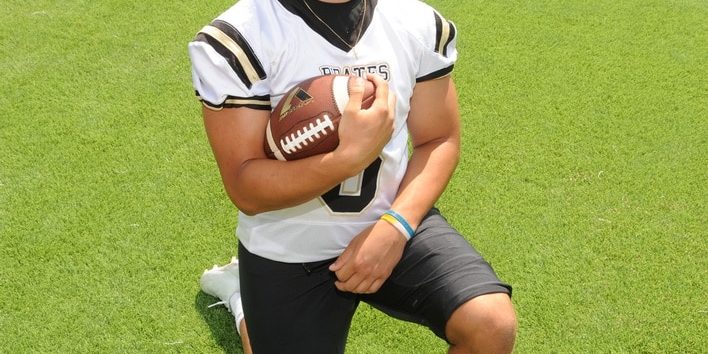 Over the last four years, the Kaplan Pirates have been one of the most consistent teams in Class 3A. For the last three years, in fact, the Pirates have accomplished something that is really hard to do and that is make the Class 3A semifinals for three straight seasons. For any other team, it would be a huge accomplishment to have just one in that span. According to Kaplan Head Coach Stephen Lotief, the biggest reason for this success is this year’s senior class, which has been a part of that impressive run.

“The senior class has been the biggest reason,” Lotief said. “You don’t make it to three straight semifinals without some of these guys playing as sophomores or even freshmen. They played against guys like DeVonta Smith (Amite/Alabama) and Travis Etienne (Jennings/Clemson) so they played against some big time talent. We felt that a lot of guys played on special teams as sophomores. It is not the most talented group, but this is a very smart group that played together and did a really good job of leading us.”

The two leaders of this senior class that have really played since they were freshmen are Quintlan Cobb and Logan Roy.

Cobb is one of the biggest swift army knives that you will find in the state. At 6-5, 300 pounds, Cobb has the physicality and the athleticism to play defensive end, tight end, and even wingback and wide receiver. With his size and versatility, there is no question that he can be a DI player. In fact, Louisiana Football Magazine’s recruiting guru Lee Brecheen believes that he is a DI player because of not only his size, but his great feet as well. Coach Lotief has nothing but praise for the do it all big man.

“Quintlan is a really good athlete that loves the game of football,” Lotief said. “He is a smart player that has played multiple positions for us. It should be very exciting to see him play at the next level.”

According to Lotief, Cobb has offers from some of the in-state schools as well as some other DI schools such as Tulsa, Houston, Memphis, Missouri, and others.

Logan Roy is another big time playmaker for the Pirates. At 6-0, 210 pounds, Roy has been an All-District player and has been one of the team’s most productive playmakers. He has also been an All-District performer on the defensive side of the football as well. According to Brecheen, Roy has the ability to be a I-AA type of player if given the opportunity. Coach Lotief would agree with that statement.

“He is another great player for us,” Lotief said. “He played running back and even on the defensive line his sophomore year. He has also played outside linebacker and free safety for us. He is a smart kid with big things ahead of him. Nobody is really recruiting him, but he can definitely play.”

According to Roy, he has received only one offer and that is from Southwestern University. However, he feels that he can bring his physicality and hands to somebody. Brecheen believes that other seniors such as RB Drake Abshire, RB Braylon Romero, RB Tyler Stelly, and OL Austen Hebert are guys that may have a shot at the D-II level.

This season, the Pirates had a great season going 10-4 and losing to the eventual state champion Eunice Bobcats in the semifinals. The season may have not ended the way the team wanted, but the seniors including Roy would not trade anything away from this experience the last four years.

“The thing that makes this class so special is that we have been playing together since we were six years old and we have some of the best chemistry,” Roy said. “My favorites part of playing for Kaplan was getting to walk out on that field in front of the greatest fans ever. There is no better feeling.”

No matter where these seniors go in regards to the next level, they will always remember playing for the Kaplan Pirates and making their school one of the best football programs in the area.

Hammond Head Coach Dorsett Buckels Is Weathering The Storm For The Tornadoes
March 4, 2021