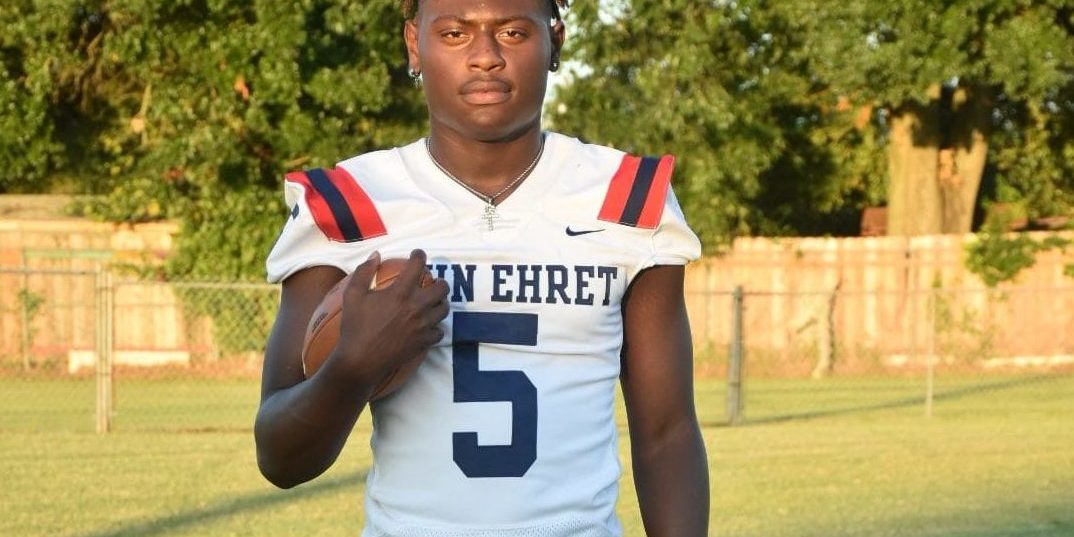 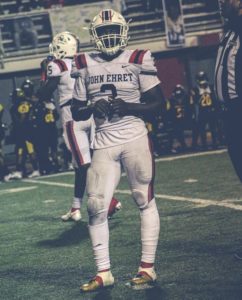 The John Ehret Patriots are known for sending a lot of talent to the college and NFL level. Ever since the school opened, players like Reggie Wayne (Miami/Indianapolis Colts/New England Patriots), Kordell Stewart (Colorado/Pittsburgh Steelers/Chicago Bears/Baltimore Ravens), and others have taken their talents to play Division I college football as well as in the NFL. Now, in 2020, the Patriots have not lost a step in not only being competitive, but also producing some of the best players Louisiana has to offer.

Despite adjusting to preparing for a limited offseason due to COVID-19 and doing so with a first year head football coach in Reggie Rogers, the Patriots did not show any signs of slowing down posting an 8-1 overall record and going to the second round of the Class 5A playoffs as a number two seed. However, preparing a team for an undetermined season in his first full season as John Ehret’s head football coach obviously provided some challenges.

“Trying to get everybody safe this year was a task, but John Ehret always has talented guys going back to the 1990’s when I played and they had Kordell Stewart,” Coach Rogers said. “Being able to attract those type of guys to this program is amazing.”

Being around not only talented players, but leaders and program guys is certainly helpful for Coach Rogers in building a championship program.

“We are very fortunate to have guys like Kaine Williams and Andrew Jones here for me to coach in my first year as head coach,” Coach Rogers said.

The John Ehret Patriots have been known for producing defensive players, whether it has been Thaddeus Washington (Colorado), Mike Phillips (Colorado), Lamin Barrow (LSU/NFL), Kenny Lewis (Wichita State), Allen Zeno (Oklahoma), or more recent players like De’Jon Harris (Arkansas) and Michael Divinity (LSU). The case can be said in 2020 as the Patriots have two of Louisiana’s best at their position in Memphis linebacker signee Andrew Jones and Alabama safety signee Kaine Williams.

“Both Andrew and Kaine are program guys,” Coach Rogers said. “They both work hard and love the idea of football. They love to workout, learn, and are students of the game. The biggest thing I can take from those guys is that they love to play football.” 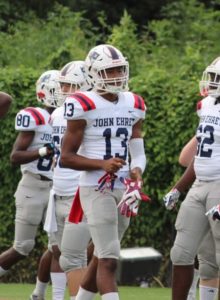 Both Jones and Williams love to play football because they are certainly good at what they do. Andrew Jones was a two way player this past season for the Patriots having an outstanding season on the defensive side of the football with 211 tackles, 24 sacks, 98 tackles for lost, four forced fumbles, two fumble recoveries, one interception and two defensive scores along with 894 yards rushing and ten touchdowns on offense. Meanwhile, Kaine Williams showed why he was one of the top sought after players in the country with tallied 51 ½ tackles, three sacks, 10 tackles for lost, seven pass break-ups, three interceptions, three forced fumble and recoveries and two defensive touchdowns.

Louisiana Football Magazine’s recruiting guru Lee Brecheen likes what he sees from these two players in order for them to carry on the Patriots’ strong tradition.

“Andrew Jones is about 6-0, 215 pounds and I saw him play as a sophomore. He is looking to carry that John Ehret tradition at linebacker,” Brecheen said. “Kaine Williams is one of the best players I have seen in the state the last three years. He is a man amongst boys and is a big time hitter. It is scary how good he can be as he also has some very long arms and legs.”

Having two players that have already signed with DI schools is a good season for any program, but there could be more players to sign for the Patriots in the upcoming signing period.

“Rashad Harris, who is a good pass rusher and run stopper on the defensive line for us, has a chance to sign,” Coach Rogers said. “He is going to find a home along with Y’Quann Townsend. Y’Quann can play H-Back, tight end, or defensive end at the next level.”

The future is also bright for Coach Rogers to continue to build a state championship caliber program while continuing to send players at the DI level. 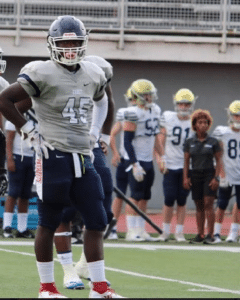 “We have a lot of guys on both sides of the football that will be coming back,” Coach Rogers said. “Losing Kaine and Andrew will be detrimental, but we have most of our offensive line and defensive line coming back. We got players like linebacker Jerzey Brown, who is only a sophomore and a guy to keep an eye on, wide receiver Zavion Thomas, who is electric, Armani Cargo returning at running back, and Koruth Wilson, who is playing on the defensive line and has been an All-District player for us. We started a lot of freshmen this past year in the secondary, but they are young and talented.”

Despite having one of the most talented programs in the state, the Patriots have not won a state championship since 1985 and Reggie Rogers believes that he has the program in place to get a state title soon in Class 5A.

“The kids are excited,” Coach Rogers said. “We have a great coaching staff that promotes our program and believes everything that we are trying to teach. Our kids love the process and when we go to work, we will go to work. That’s the motto for us. We are trying to get to the next level and that is getting to a state championship. I think John Ehret has a state championship in its future, and I think we will be able to do it.”

With talent and confidence on their side, the Patriots are looking to channel that into a deep playoff run in 2021.