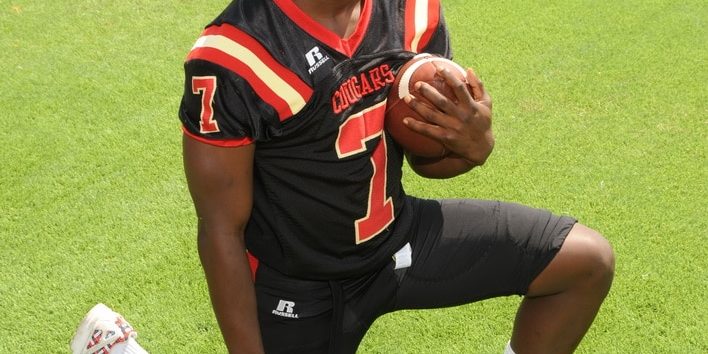 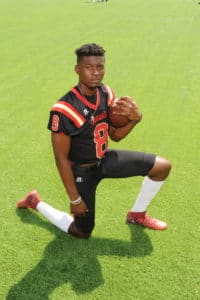 Every year, it seems that the New Orleans area produces plenty of talent. Big name schools like John Curtis, McDonogh 35, Archbishop Rummel, Jesuit, McDonogh 35, Landry Walker, Brother Martin, John Ehret, St. Augustine, Edna Karr, Warren Easton, etc. are always the headliners when it comes to National Signing Day, but a school that has emerged as one of the most talented in the area is Helen Cox High School. The Helen Cox Cougars, led by Head Coach Derek “Skip” Lamothe, have produced success on the gridiron. Last season, the Cougars won six games including a playoff game against North DeSoto before losing to the Northwood Falcons in the second round of the Class 4A playoffs. Even though it seemed like a good year on the surface, Coach Lamothe, who just finished his third season as Head Coach, thought it could be even better.

“We ended up playing one of the toughest schedules in the state last year,” Lamothe said. “We went through a tough stretch in the middle of the year where we had some injuries to some key players and kind of affected to what we wanted to do.”

Still, despite the injuries and tough schedule, the Cougars not only pulled through, but they were really competitive in a lot of other games as well. A big part of the Cougars’ success has been the talent that has gone through the school in just a couple of years. In fact, Louisiana Football Magazine’s recruiting guru Lee Brecheen does not believe Helen Cox gets enough credit for the skill talent that goes through the school.

“Helen Cox has always had some of the most underrated athletes in the state,” Brecheen said. “I think this class has a lot to show for it.”

Helen Cox has always had talent, but now, it seems like there is something different going on now at the school. According to senior WR Kalil Lloyd, senior DB Solento Smith, and Coach Lamothe, it has taken more than talent to get the team where it is today.

“It starts with the grades,” Lloyd said. “I think our football program and our grind in the off-season and our coaches pushing us each and every day has made us successful.”

“All the way it has been Coach Skip,” Smith said. “He told us to trust the process when we went 1-9 his first year. Then, we bounced back and went to the playoffs two years in a row.” 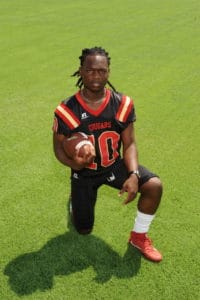 “It is important that the kids buy in not only the football program, but everything the school offers in academics,” Lamothe said. “When it comes to recruiting kids, that is what they look at first and that is academics. Then, everything follows.”

Apparently, this senior class has gotten Coach Lamothe’s message. Besides wins, producing players at the next level is a key indicator that a football program is successful and you cannot go wrong with what the Cougars accomplished in December and in February. Over that period of time, six Cougars have signed with colleges to continue playing at the next level.

The biggest signee was actually a John Ehret transfer, and his name is Terrell “Smoke” Brown. The John Ehret transfer came into the season as one of the best running backs in the state of Louisiana. Heading into the season, the three star running back has received offers from Arkansas, UTSA, UAB, South Alabama, Louisiana Tech, and Texas State, but in the end, it was Dana Holgorsen and the Houston Cougars that pursuaded Brown to join their team as he signed his letter of intent in the second signing period. In his one year at Helen Cox, he ran for 1,155 yards and 15 touchdowns on 200 carries while averaging 5.8 yards per carry. He also caught 17 balls for 115 yards. According to Brecheen, the Houston Cougars got themselves a good one.

“Terrell Brown was originally at John Ehret before he transferred for his final season at Helen Cox High School,” Brecheen said. “At the time, before he transferred to Helen Cox, Terrell was an All-District running back and one of Ehret’s top players. At 5-11, 190 pounds with 4.5/40 speed, he is an under the radar back that could play in the NFL one day. Houston got themselves a really good player.”

Kalil Lloyd, who was mentioned earlier, has also signed. The 6-6, 215 pound receiver has chosen to attend Prairie View A&M. He, too, has signed in the late National Day signing period. Lloyd gave his thoughts on why he decided to sign with the Panthers.

“What made me sign with the Panthers is first, the way they run their program,” Lloyd said. “They throw the ball a lot so that gives me an opportunity to be the playmaker that I am. Second is their facility. It is outstanding. I think it is the best of the best in the SWAC conference. Finally, it was the atmosphere with the players and the coaches. Everyone has the same mindset (GRIND) and we all have that winning mentality.”

Like his teammate “Smoke” Brown, Brecheen believes that Lloyd is a sleeper and in time, can be a great player.

“Kalil Lloyd is 6-5, 210 pounds and could end up being around 230-240 pounds,” Brecheen said. “Once he grows into his frame, he can become a pro prospect because he already has 4.7/40 speed. If he was 230 pounds right now, he would have gone to a bigger school. However, Prairie View A&M stole a sleeper from some colleges and will be getting themselves a good one.”

Then, there is Solento Smith, who has also been mentioned earlier and has signed with Texas Wesleyan University. Smith has had a good high school career with five interceptions, 163 tackles, and 48 pass breakups. He reflected on his decision to play with the Rams.

“Texas Wesleyan University is a great program,” Smith said. “The coaches are great and they are really teachable. At my official visit, the school looked great and the people over there are really great. It’s just a really good environment to spend my next four to five years.” 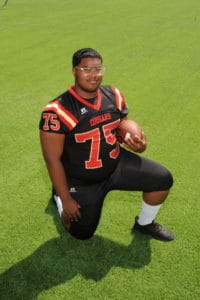 “Both Caleb Rogers and Adam Thomas can play multiple positions,” Brecheen said. “Caleb is a great athlete that could play wide receiver, running back, or cornerback, and he could do so with 4.5/40 speed. He is another under the radar player while Adam Thomas could play either wide receiver or defensive back. He has 4.5/40 speed and he is an under the radar good pickup for Louisiana College.”

Even though the signing class consists mostly of skill position players, it does not mean that there were not any linemen that did not sign. Senior OL/DL Bobby Brumfield signed with Lakeland Community College.

“Bobby Brumfield is a tweener as an offensive lineman/defensive lineman as he is only 5-11, 260 pounds,” Brecheen said. “However, he is a very aggressive player with good feet and has the ability to move. He will be a good fit for them.”

Coach Lamothe believes that there can be as much as 13 players who could all sign in the end including the ones that have already signed. Other names to keep an eye out for are C/DT Ronnie Washington, OT LaRenz Pendleton, WR Joseph Patterson, RB Colby Johnson, and DB Haushon Miller. For Brecheen, he is keeping an eye on Pendleton.

“Pendleton has the most upside of the players that have not yet signed,” Brecheen said. “He needs to fill out, but he could be an offensive tackle or defensive end in college. He is a big kid that is long and tall.”

As you could see, there is a lot of talent in the Class of 2019, but what maybe even crazier is that next year’s 2020 class might even be more talented for Helen Cox.

“We return about 13 starters for next season,” Lamothe said. “Our quarterback returns as well as a lot of our skill guys. However, our offensive line will be very young, but I like what I see from them. Right now, we have four or five players that are ranked in the top 100 for the state of Louisiana next season.”

There will be certainly a lot of attention focused on the Cougars. Junior safety Donovan Johnson has already received offers from Arizona, Indiana, Houston, Kansas, and Liberty. Junior linebacker Kelin Burrle is one of the top rated prospects in the state next season and is a current UTSA commit. Junior CB Raek’won Starks has received eight offers from Houston, ULL, Louisiana Tech, ULM, Tulane, UAB, Utah State, and UTSA. Finally, other juniors Jacoby Wells and Charles Hawkins will be getting attention as well.

As far as exciting and talented teams to follow, the Helen Cox Cougars will certainly be one of them.