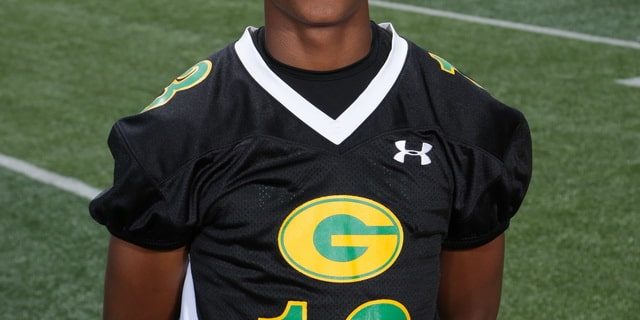 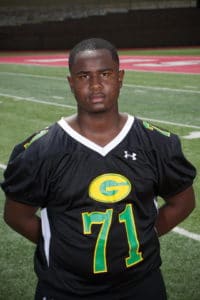 The Green Oak Giants went into the off-season having to replace some players at the skill positions in WR/DB Damien Crawford (Southern), WR/DB Lexington Simon (Southern), and WR/DB Kenric Jackson (Southern).  Even with that being the case, Coach Terrence Isaac knew that he had Davion Sanders at receiver, Khyre Poole in the backfield, and Chaz Crawford and Rovell Carter on the defensive line.

The players mentioned above all had great season for the Giants in 2018 leading the team to the playoffs where they lost a close game to Wossman.

Louisiana Football Magazine’s own recruiting specialist Lee Brecheen got the chance to see the Giants in their Week 8 game against Loyola Prep.  He left the game extremely impressed with these players. Brecheen and Coach Isaac both speak very highly of these players and Brecheen believes that Sanders, Poole, Crawford, and Carter are diamonds in the rough for the D-I level.

“Davion led the state in receiving with 67 catches for 1,301 yards and 17 touchdowns,” said Coach Isaac.  “He is a special player. I expect to see him playing on Sunday’s in years to come.”

“Davion Sanders is one of the most underrated receivers in the state,” Brecheen said.  “He has that second gear that the big schools look for. He has really good hands and he’s tough.  I think that he’s a D-I guy. I don’t know why he isn’t getting more offers, but I know he’s big time.”

When Sanders is not catching the ball, it is being thrown to or ran by Khyre Poole.  Poole had over 1,200 all-purpose yards in the 2018 season.

“Khyre is a great all around player,” Coach Isaac said.  “He truly loves the game of football.”

“Poole is a very versatile running back that I think is D-I also,” said Brecheen.  “He’s got some power and he’s fast. He can also play some slot receiver in college.  He’s about 5-10, close to 200 pounds with very good speed.”

The offensive side is not the only side of the ball that has potential D-I players for the Giants.  The defensive line has two big bruisers in Chaz Crawford and Rovell Carter. They play next to each other and are a nightmare for opposing offensive lines.

“Chaz is a great team leader,” said Coach Isaac.  “This guy did everything we asked of him. He’s a complete team guy and Rovell is a big, physically talented kid that will only improve in college.”

“Crawford is another big time D-I defensive end, who has come a long way,” says Brecheen.  “He’s got a knack for rushing the passer. He could get recruited as a buck defensive end like at LSU or be a true defensive end.  He’s about 6-3, 240 and he can really move. He’s tough and looks like an SEC player to me. I was really taken aback at how good he is when I saw him in person.”

“Carter plays next to Crawford on the defensive line and plays offensive line as well,” Brecheen said. “I think Rovell is another D-I guy that Green Oaks has. He could be a defensive tackle at any level.  He’s big, strong, and gives you high effort. He moves well for a big guy at 6-3 over 300 pounds.”

It is a great thing for a coach to know that, more times than not, he will have an advantage when his defense is on the field with these two guys on the line. If the program continues to grow and get big time players like Coach Isaac has had these last two seasons, the Giants will be seen making a run in the playoffs in the near future.