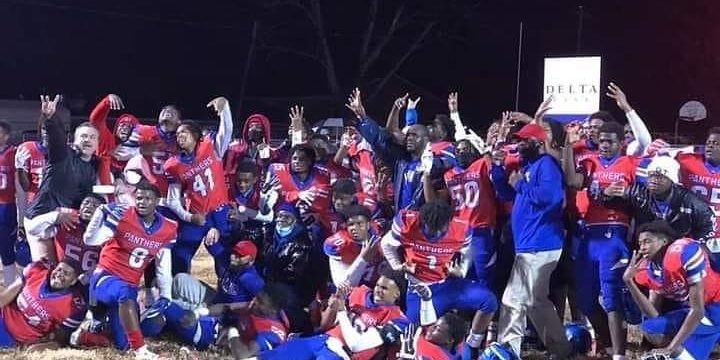 In 2020, there were a lot of teams that were begging for a chance to play and one of those teams was the General Trass High School Panthers. There was a lot of uncertainty going into the season if there will even be a regular season played, but when the LHSAA decided to continue with a football season, General Trass High School head football coach Toriano Wells was one of those coaches that has praised the LHSAA’s decision.

“First off, my hats go off to Executive Director Eddie Bonine and the LHSAA for allowing us to have a season this year,” Coach Wells said. “It has been a great year despite all the challenged with COVID.”

Despite all the challenges with COVID, the Lake Providence area based team was going to get their community something to be proud of. In fact, the team knew it had something special after its season opening victory against football powerhouse Evangel Christian Academy.

“After the Evangel win, we knew that we were on to something,” Coach Wells said. “However, it kind of caught us by surprised on how good our team was as the season progressed. We lost to Ferriday and Mangham early in the season, and we lost to them big. Despite the circumstances, our kids kept on fighting and we knew that this group was going to be special.”

This special group had a very special run into the Class 2A playoffs, which started with the same team they ended the regular season with in the Rayville Hornets.

“One thing I told these kids that you have to enjoy that night,” Coach Wells said. “You beat them pretty handedly in the last game of the season as it is pretty tough to defeat one team twice in the same season. We came in on Monday and started over with our preparation. The kids were prepared and showed that if we were prepared, we can take care of business and that is what we did.”

After a 42-8 victory over Rayville in the first round of the playoffs, the number 12 seed Panthers had to face off against the number five seed and highly talented North Caddo Titans. Despite being the underdog, playing against some of the toughest Class 2A competition the state has to offer helped them in that position heading into the second round playoff game.

“With the athletes both of those schools have as well as the coaching staff both have, they both do an amazing job,” Coach Wells said. “After you play against schools like that and you compete, you watch the film and realize that it was not the things they did, but it was the mental mistakes we made that you can’t make against good ball clubs. We made some mistakes and good teams will always take advantage of those mistakes.”

While General Trass may have made mistakes early in the year against both Mangham and Ferriday, they certainly did not in their playoff run.

“The North Caddo game was exciting for the fans, but for the coaches, it is kind of nerve racking, especially when you trade scores,” Coach Wells said. “North Caddo has a lot of great athletes, and a lot of their best players are underclassmen as well. They were coming off a big win against a good Welsh ball club, and they came in ready to play. I told my guys that it was their chance to make history as there were teams over the years that have won playoff game, but not a lot at General Trass can say they won two so let’s go out and make some history.”

The Panthers certainly made history that night winning a thriller 56-54. The very next week, the Panthers continued their momentum against another top seed in the St. Helena Hawks. Not only did the Panthers pull it off for the third week in the row while making the Semifinals, but they did so in dominating fashion winning 42-18.

“The kids were motivated to play as St. Helena came in like it was a home game for them,” Coach Wells said. “We told our guys that they had to defend our home. If that is what they want to do, then, we are going to show up and fight. The kids rose up to the challenge and even though we did not think it would be as lopsided as it was because of the athletes that they had. However, our kids rose to the challenge all year and were not afraid of what was against them.”

It was a magical season for the Panthers, but every Cinderella has its clock strike midnight, and that clock happened to be the eventual Class 2A state champion Many Tigers losing in the 2A semifinals.

“Many is Many, and now, we are trying to schedule some teams that will help us get prepared for Many,” Coach Wells said. “We are currently looking for a Week 3 and a Week 9 opponent. We want somebody that wants to play smash mouth football like Many plays so we will be ready next time if we meet them in the playoffs again because we all know to get to the state championship, we would have to go through Many.”

Although the Panthers are not there just yet in trying to reach the Class 2A State Championship, there is some bright young talent that has a chance to get them there in the near future.

“Some of the guys that we are looking forward to having next year are our quarterback Wydett Williams, who has thrown for over 1,000 yards passing this season as well as ran for over 1,000 yards, running back/wide receiver Markel Norris, wide receiver/linebacker Jalarrion Newson, and several linemen like Jayvien Williams, who is 6-3, 290 pounds, Kelvin Lane, who is 6-5, 270 pounds, are guys that are going to be sleepers for somebody in college.”

In speaking of sleepers, there are also some seniors that have a chance to play based on their athletic ability.

“There are a couple of guys that will have a chance to play, but need to get their ACT scores up as those guys have 16s on their ACT,” Coach Wells said. “Jar’vyea Campbell and Jamarion Steward are two seniors that stepped up in the receiving core for us. Then, there is of course, Demontrell Quinn, who plays running back for us. This guy had himself a breakout season. If any team can come in and look at Demontrell’s size, speed, and vision, then, they are getting themselves a steal. I ask any junior college to come in and look at him because he is definitely going to be a player in the future.”

Coach Wells is not the only person that believes Quinn is a big time sleeper, but Louisiana Football Magazine’s recruiting guru Lee Brecheen also believes that Quinn has a chance to be special.

“If Demontrell Quinn played for West Monroe, Neville, or Ouachita, he would be a DI recruit right now,” Brecheen said. “I had a chance to see him play and his hips, vision, and burst are incredible. He is the team’s starting running back, but he also plays everything else for the team as well.”

It is the commitment of coaches like Toriano Wells and players like Demontrell Quinn that have given this school community hope of being on the map in athletics for the future.

“This is the first time the school made the semifinals since 1963,” Coach Wells said. “That’s a big thing for the community and everybody was calling when we had that Quarterfinal victory over St. Helena. Alumni was calling wanting to give donations, and it was just so great for our town and community. Making the semifinals this year sets the bar high for our program, especially coming from a town like Lake Providence that does not have a lot of resources for our school. Now, they are expecting to make an even deeper run at the playoffs as well, but having that type of season raises the bar for your kids, school, and community so we are ready for what next year is going to hold for us.”

If 2021 turns out to be anything like 2020, then, the General Trass High School community will surely have a lot of things to be excited about.