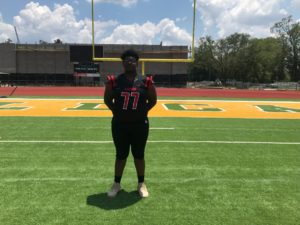 The Fontainebleau High School Bulldogs had to go through a rebuilding year in 2017 but headed into the 2018 season with more promise returning lots of talent and experience. Coach Chris Blocker does not have many returning skills players, but makes up for in having big guys on the offensive line to build around.

The Bulldogs have two offensive guards that both have the talent to play in college in Griffin Clements and Douglas Schuler. Both players come from football families. Clements’ father Brett Clements was the 12th man at Texas A&M in 1990. Schuler’s father Steve Schuler was an offensive lineman for Tulane from 1992-1995. Louisiana Football Magazine’s own recruiting specialist Lee Brecheen has similar things to say about each of these players.

“Clements is a big time sleeper for I-AA or some D-I school,” Brecheen said. “He already has some attention from Ivy League schools. The kid has good feet, but needs to put on another 20 to 25 pounds of good weight in college. He could learn the center position in college.”

“Like Griffin, Douglas Schuler has good feet,” Brecheen says of Schuler. “He will get a shot or should at a I-AA school in the end. He needs to put on about 20 pounds and get stronger, but has the feet to excel at the next level either as a center or a guard.”

Another guard that has the possibility of playing D-II or D-III is 6-2, 330-pound senior Isaac Gray.

The defense is led by senior defensive backs Marvin Lange and Jaden Davenport. Brecheen believes that both of these guys can play at the next level. Lange can run a 4.5/40 and Brecheen sees him going to a D-II or D-III school.

“Jaden can be as good as he wants to be as an athlete,” Brecheen said. “He is a very fast kid with a lot of upside as a running back and kickoff returner. He has shown DI ability in the past, but is most likely a I-AA athlete and would be a steal at that level.” 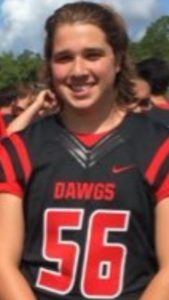 The Bulldogs have two specialists that will have an impact on the team in long snapper Brayden Goodreau and kicker Chris Mastio.

“Mastio is a very underrated kicker,” Brecheen said. “He started in 2017 and did well. In 2018, he is doing a really good job so far. He can make 40-yard field goals with some room to spare. He just needs to work on kickoffs because DI schools want their kickers to kick the ball out of the end zone every time, but that is something most high school kickers have to work on coming out of high school.”

Snapping the ball on field goals is Brayden Goodreau. “Goodreau is one of the best in the state and will get a chance to do that in college either at a D-I or 1AA school,” Brecheen said. “Most long snappers have to walk on but he is one that can sign right out of high school.”

Fontainebleau has a tough stretch of games coming up having to face Northshore High School, Covington High School, Ponchatoula High School, and Slidell High School. Coach Blocker has his work cut out for him but has the talent to make a run and finish out district play strong.