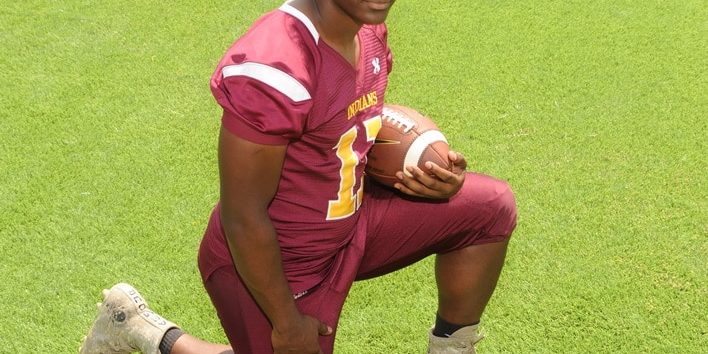 Being a small 1A school can be tough.  The team can be overlooked as a whole as well as the players no matter how talented they are.  Going into the 2018 season, the Elton Indians knew that they were going to be going through a rebuild.  First year Head Coach Donald Bruchhaus was going to have his hands full, but the senior class was there to help. QB Gavin Courville, RB Darnell Robinson, and TE/DE KerVondrick Scott were key parts in helping the team grow during the 2018 season.

The team was able to make the playoffs after finishing 3-7 in the regular season, which will help going into 2019.  The returning players will have that playoff experience which can help the team go farther during the 2019 season.

“Scott played tight end and defensive end for the team,” Brecheen said.  “He is an extremely blessed and gifted player. He has hands like no one else I’ve seen at the tight end position this year.  He also runs as good as any tight end I’ve seen in three years. He can run about a 4.69/40, but looks faster. He is a legit 6-4, 220 guy.  He can end up being about 250 pounds in college. He looks like Irv Smith (Brother Martin/Alabama), but taller.”

“Courville was the QB for the team in 2018,” Brecheen said.  “He is an extremely good athlete. He is probably a D-III guy in the end.”

Each of these seniors brought lots of talent and experience to a young team in 2018.  If the upcoming players can continue to bring the intensity that these guys brought to the team, they will improve on their 3-7 2018 record and make the playoffs again in 2019 under Coach Bruchhaus.