The E.D. White Cardinals’ Versatile Senior Group Finding The Right Fit At The Next Level

The E.D. White Cardinals’ Versatile Senior Group Finding The Right Fit At The Next Level 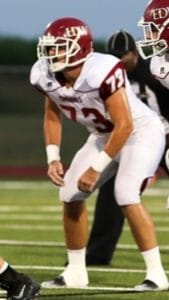 For example, the Cardinals’ star playmaker Brandon Legendre has played running back, wide receiver, and even quarterback. There is Miles Loker, who is both a kicker and a punter. Then, there is Michael Clement, who plays on both sides of the football as a running back and defensive back. Also, Tyler Boudreaux can play both offensive tackle and defensive end. Karson Adams can play on both lines of scrimmage, and finally, there is Aaron Benfield, who has played offensive guard, tight end, defensive end, fullback, and linebacker.

According to Louisiana Football Magazine’s recruiting specialist Lee Brecheen, what makes all six seniors unique is their ability to play multiple positions and be effective while doing so. Brecheen is especially impressed with Legendre and Benfield.

Brecheen was very high on Legendre to say the least at the beginning of the season so much so that he put him on the second team All-South LA team by saying that he is maybe the best player that he has seen come out of the program. If you look at Legendre’s numbers over his career, it would be hard to argue against that claim. The All-State athlete has accounted for over 6,000 yards and 80 touchdowns during that short time frame.

“I think Brandon Legendre is the best player that I have ever seen come out of the program,” Brecheen said. “I saw this kid play in 2016 and knew that he was special then. Legendre has incredible speed and power for a smaller player. In the open field, he is a human highlight reel with 4.4/40 speed.”

Even though Legendre may be a little undersized, his playmaking ability was just too good to past up. Legendre would then receive college offers from programs such as Notre Dame, West Virginia, TCU and Kentucky among others. For the three star athlete, it took more than his God given ability to put him in the position to sign with a big DI program.

“I think it is my want to grow and learn from myself as well as my mistakes are my biggest strengths as a player,” Legendre said.

The athleticism, speed, and the will to become better every day are all quality tools to bring to a strong football program. Despite receiving offers from Power Five conference schools, Legendre has decided to sign in-state with the ULL Ragin’ Cajuns in the early National Signing Day period. For Legendre, going to a school that would fit him the best was the number one priority and the Ragin’ Cajuns fitted that agenda.

“I just knew they were the team that fit me the best,” Legendre said. “They are exactly what I want from a college program so I decided to get on board as soon as possible and that would be in December.”

Legendre has already made his decision and is now looking forward to contribute to a winning season as well as a conference championship and a big bowl appearance. As for his other jack of all trades teammate Aaron Benfield, he is still figuring out where he is going to send his athletic talents.

At 6-1, 235 pounds, Benfield has received offers from Arkansas Monticello, Benedictine, Kentucky Christian, Kansas Wesleyan, Keystone College, and Texas College. For Benfield, he is looking for the program that wants him the most,

“I am willing to do anything to get on the field and help the team win,” Benfield said.

Even though Benfield made 1st Team All-District as both an offensive guard and linebacker while making 145 tackles, six sacks, and three forced fumbles on defense, Brecheen believes his future playing days on the offensive side of the football especially at two different positions.

“At 6-1, 235 pounds, I think that Aaron Benfield could play either fullback or offensive guard in college,” Brecheen said. “He has got to make a decision if he wants to put on a lot of weight and become a lineman or stay around where he is now and become a fullback.”

Besides Legendre and Benfield, the other names, which have been mentioned earlier, have a chance to play somewhere.

“Karson Adams is the sleeper of the E.D. senior class,” Brecheen said. “He is 6-2, 250 pounds and can play either offensive line or defensive line.”

“Another sleeper is Tyler Boudreaux, who also can play offensive or defensive line at 6-3, 265 pounds,” Brecheen said.

“I thought that Miles Locker is a DI punter,” Brecheen said. “I think he would be a steal at the DI level.

“Finally, Michael Clement is very much a sleeper,” Brecheen said. “However, he played in the shadow under Brandon Legendre. In my opinion, I think he can play at the D-II level.”

This senior group may be going out in different paths in more ways than one, but one thing that will always bond them together is the love of the Red, Gray, and White.

“I’m going to miss Friday night with my friends and teammates the most,” Legendre said. “There is always something special playing with guys that you grew up with.”