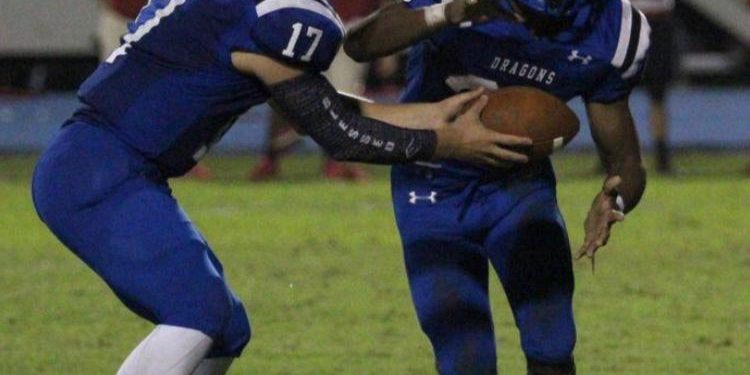 The DeRidder Dragons have had a string of success having made the playoffs consistently in the past ten years. Coach Brad Parmley has done a great job with the program. The success the team had in the 2018 season starts with the presence of seniors Lane Armer and Gregory Woodard.

“Lane has had an outstanding high school career,” Coach Parmley said.  “He’s broken a few school records for passing and done a great job setting the standard for quarterbacks in the future.”

“It’s been full of ups and downs,” Armer said.  “Coach Parmley preached to us that we as a team are a family and you play for each other. He has taught me a lot about being prepared for life and always doing the right thing.”

That type of relationship is what high school football is all about.

The Dragons finished the 2018 season with a 6-5 record and a playoff appearance.  The team was extremely athletic and that showed throughout the season.

“The team’s strength was our athleticism,” Armer said.  “We had athletes who could make plays when nothing was there and we had the offensive line that could block and allow us to do that.”

As the quarterback, Armer had some strengths that created problems for opposing defenses.

“I’m a physical runner when I need to be,” Armer said.  “I’m also accurate from the pocket.”

Those strengths combined with the speed of the rest of the offense created mismatches for opposing teams that the Dragons could exploit.  Woodard is one of those guys that has speed on the outside. He has 4.5/40 speed at the wide receiver position. That speed also helps when he goes on the other side of the ball and plays in the defensive backfield.

When asked about these players, Louisiana Football Magazine’s own recruiting specialist Lee Brecheen says they will both be great D-II players.

At this time, Armer has an offer from Louisiana College and has been contacted by Northwestern State University. Whoever these two players end up signing with will get great players and leaders for their team.